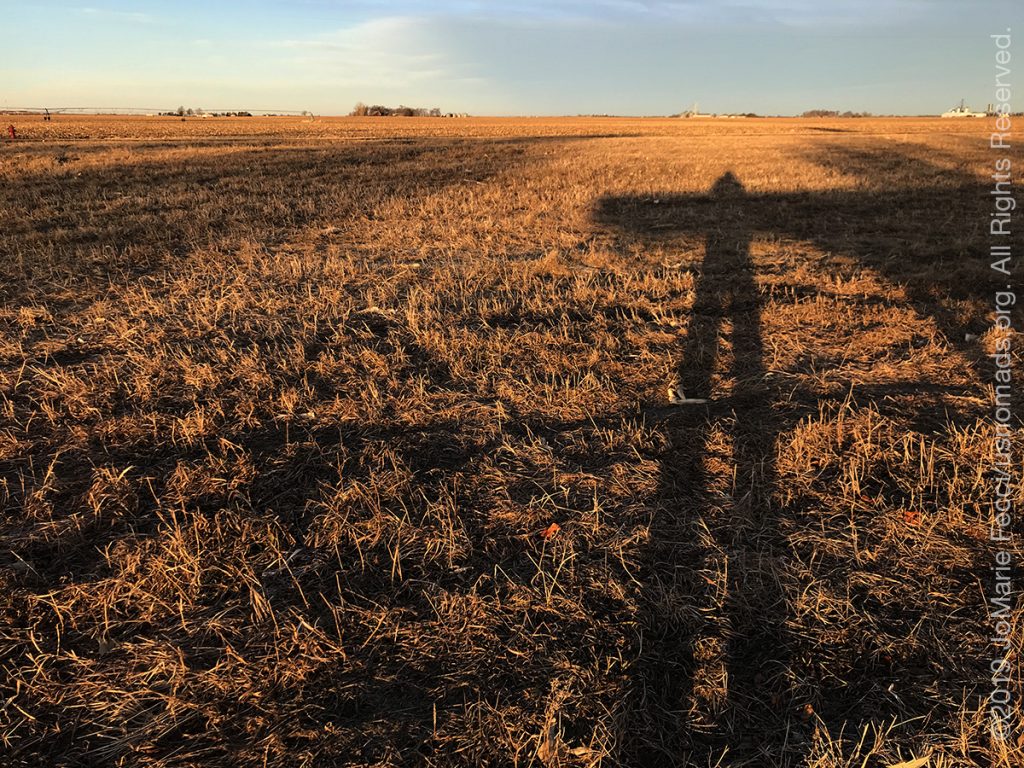 YORK, NE to GOLDEN, CO (22 December 2019) — Leaving the flatlands of the Great Plains and approaching the Rocky Mountains as things start to get a bit more “wintery.” Though so far the forecast is holding up for a decent weather day for the mountain crossing tomorrow.

The temperature had dropped and it was a bit windy as I got ready to hit the road in the morning. Outside it was sunny and bright but there was frost on the Nebraska cornfields. As I started my drive I was thinking about how massive these farms are. The flatness of the land distorts the visual scale, making it seem large and small at the same time. In fact each farm bleeds into the next one and the whole vast space is separated only by the farmhouse compound buildings and a few trees here or there. I wondered if once there were more trees that had been cut to make the farmland so perfectly flat and workable.

I let my mind wander as the miles rolled by, imagining that once maybe the whole area had forest or woodlands and then when the Europeans came they cut them down, first to build homes, and then later to clear the land for farming. Eventually the whole area was void of trees and that set the scene for the winds to rip across the landscape creating the “dustbowl” of the 1930s. Somehow linking the tragedy of the dustbowl to the settlers’ attempts to “control” and “redesign” nature — though I have absolutely no idea if there is any linkage at all, this was all my idle imagination on overdrive.

Before my imagination could go even further, I had reached my first waypoint for the day, an “attraction” called “The Archway” at Kearney Nebraska that actually focused on the story of those “pioneers.” The Great Plains region had a unique role in the western expansion of the United States, and my imagination wasn’t completely wrong. 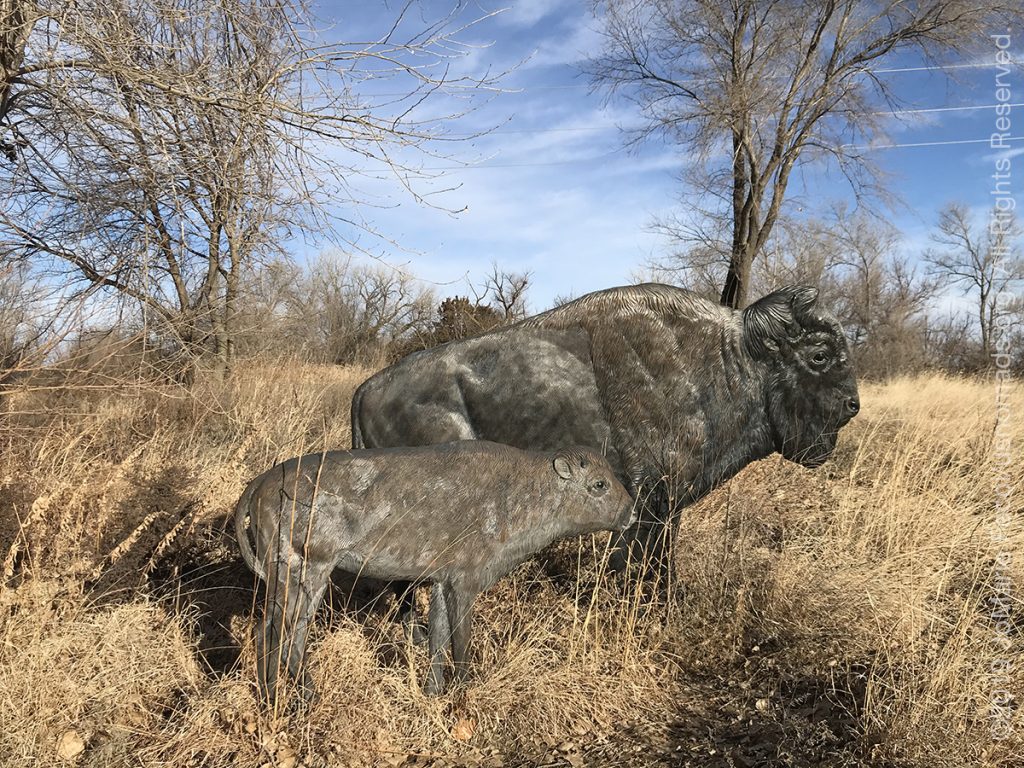 The landscape itself was formed by a shallow inland sea that covered the region during the Cretaceous period (145–66 million years ago), before receding during the Late Cretaceous to the Paleocene period (65–55 million years ago). In its wake it left a relatively flat terrain with rich marine deposits that were favorable to the evolution of grasslands. As the climate changed, forest biomes declined and grasslands became much more widespread, providing a new niche for mammals that switched from browsing diets to grazing diets. When the first native Americans (Paleo-Indians) arrived thousands of years ago the area was rich with buffalo herds that supported the development of a fully nomadic horse culture during the 18th and 19th centuries. Initial contact with European explorers, trappers and fur traders was mostly peaceful and led to useful exchanges until the “settlers” started coming west after the the Lewis and Clark Expedition of 1804–1806. Fur trading posts soon became the basis of later settlements, and through the 19th century, more Europeans migrated to the region. By 1870, railroads crossed the Plains bringing farmers, who rushed to settle the land under “homestead laws” that allowed a settler to claim up to 160 acres of land, provided that he lived on it for a period of five years and cultivated it. The buffalo herds were hunted to near-extinction and cattlemen began using the Great Plains as open range. The railroads made it possible to ship cattle, wheat and other crops to the urban markets in the East and immigrants poured into the region creating a belt of farmland across the whole prairie. 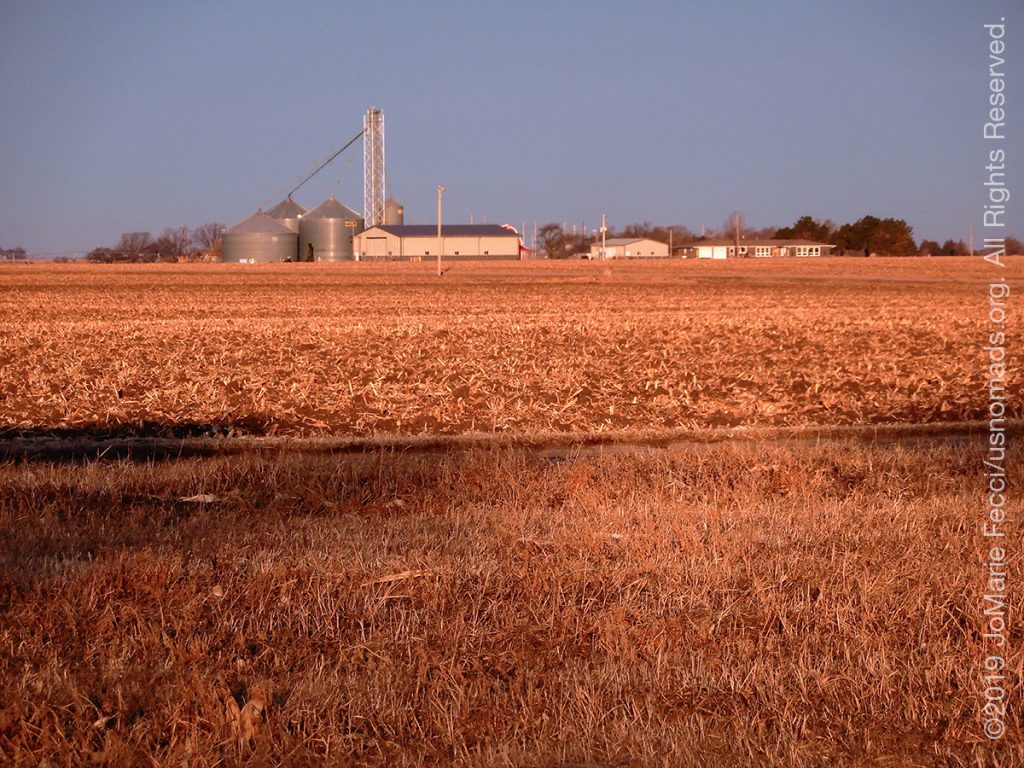 With insufficient understanding of the ecology of the plains, the farmers conducted extensive deep plowing of the virgin topsoil, displacing the native, deep-rooted grasses that normally trapped soil and moisture even during periods of drought and high winds. Grasslands are among the least protected biomes and wind speeds are often very high, especially in winter. Over time the mechanization of farm equipment–especially small gasoline tractors and combine harvesters–made it “easy” to convert arid grassland to cultivated cropland. When severe drought hit in the 1930s, the unanchored soil was blown away by the prevailing winds creating the “Dust Bowl” tragedy. 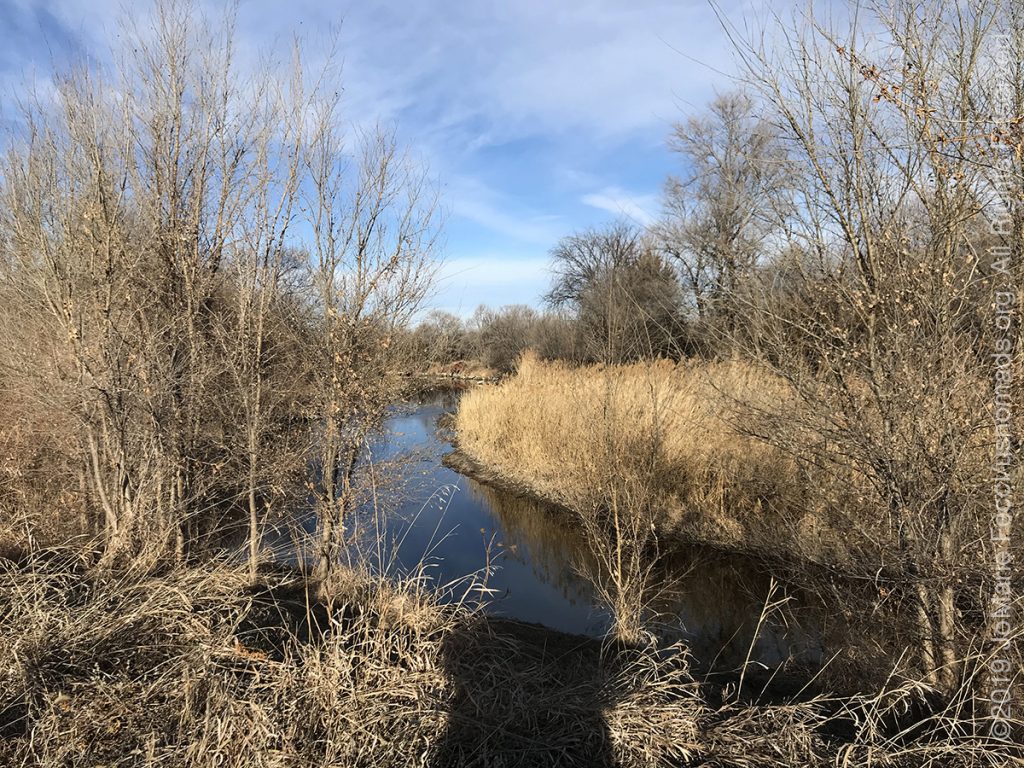 The Archway museum itself was closed when I arrived, but the “discovery trail” was open and I really just wanted to go for a short hike to stretch my legs anyway, so it was perfect. The trail had a few interpretive panels and displays illustrating aspects of the region’s history and then continued on along a stream and merged with a longer bike path that wound through a lightly wooded area of wetlands. It seemed very different than the actual “flatlands” of the Great Plains and more like a familiar woodland area back east. Though the tall golden prairie grass near the exhibit area was iconic. 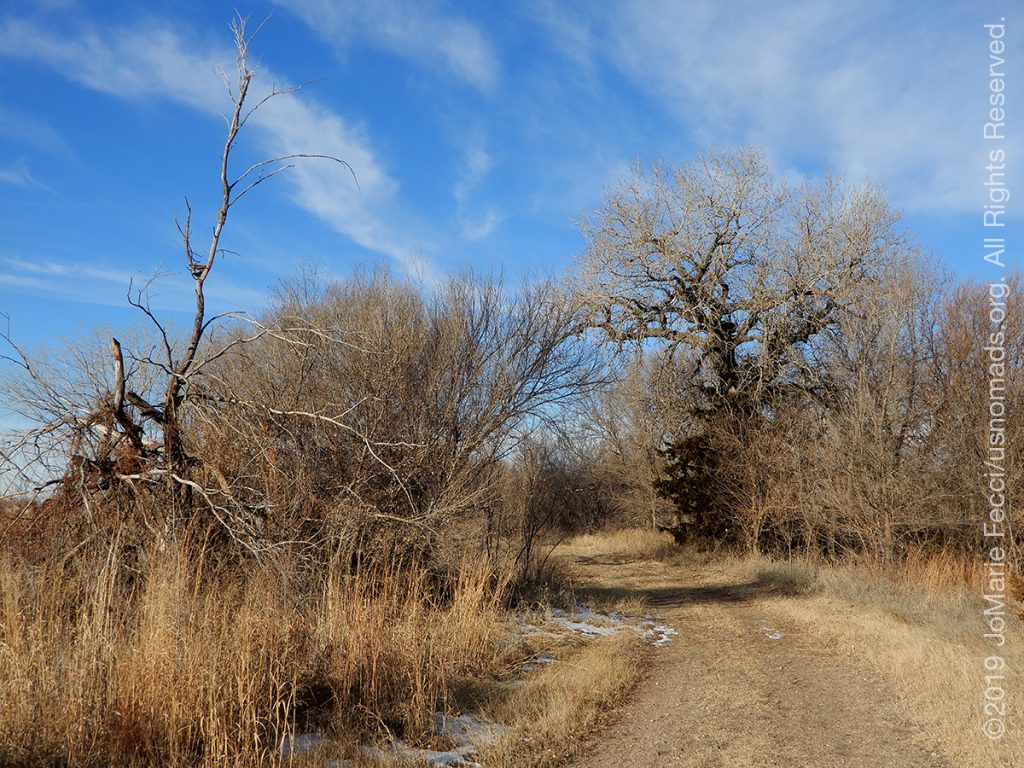 It was quite cold outside and I was completely bundled up as I wandered between the trail and the banks of the stream just kind of exploring and stretching my legs simultaneously. I was the only one walking out there this early in the morning on a Sunday and I had the trail all to myself. I was glad to be ahead of the crowds, and looking at all the footprints it seemed like crowds could be large. I noticed some animal tracks among the human ones, and even identified a few deer prints. 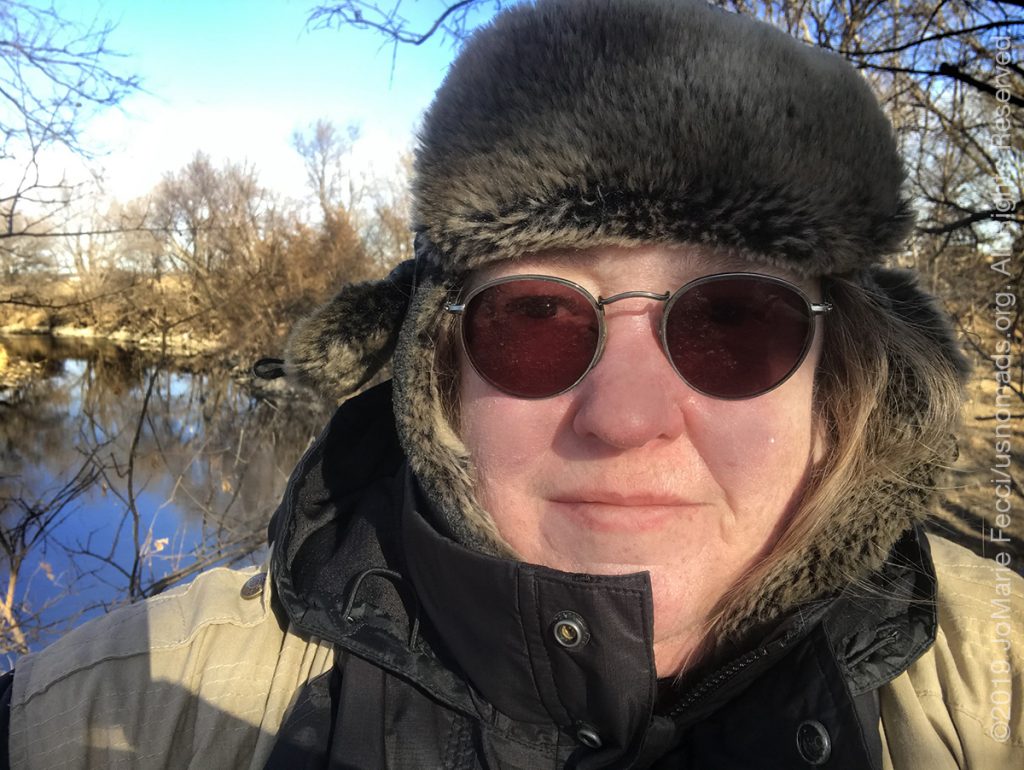 One of the more random things I found intriguing on my walk was actually a series of old rusting car hulks half buried along the banks of the stream. I wondered how they got there, where they came from and why they hadn’t been removed when the municipality created the bike path. Maybe they served a purpose in managing the waterway. In any case their presence remained a mystery unanswered for me. 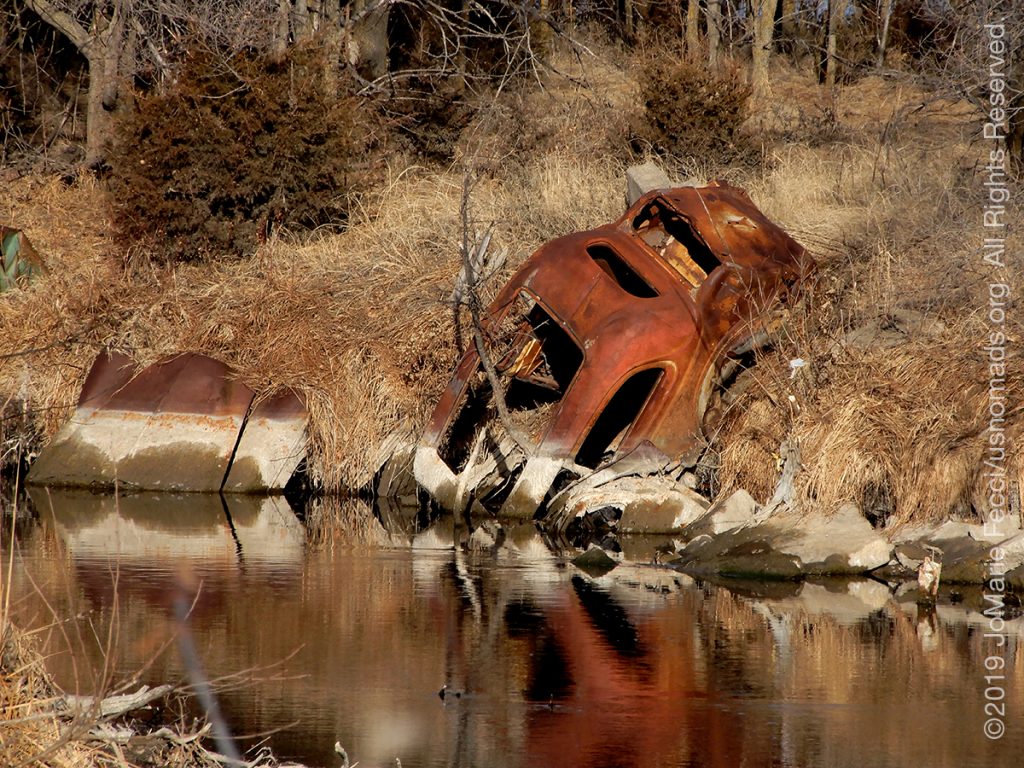 As I returned to the warmth of the Jeep the museum was opening and the first visitors began to arrive. I had no more time and needed to get back on the road. The I-80 continued to stretch out westward across the rest of Nebraska.

Great swathes of farmland, cut corn stubble and cows alternated out my windows and I realized that for the last day or so the entire length of the drive was peppered with the pervasive odor of cows or fertilizer. And it was winter. And my windows were closed. When finally I exited I-80 and turned southwest on I-76 I was glad to begin to see some “relief” in the terrain, even if it was only the smallest of hills at first. 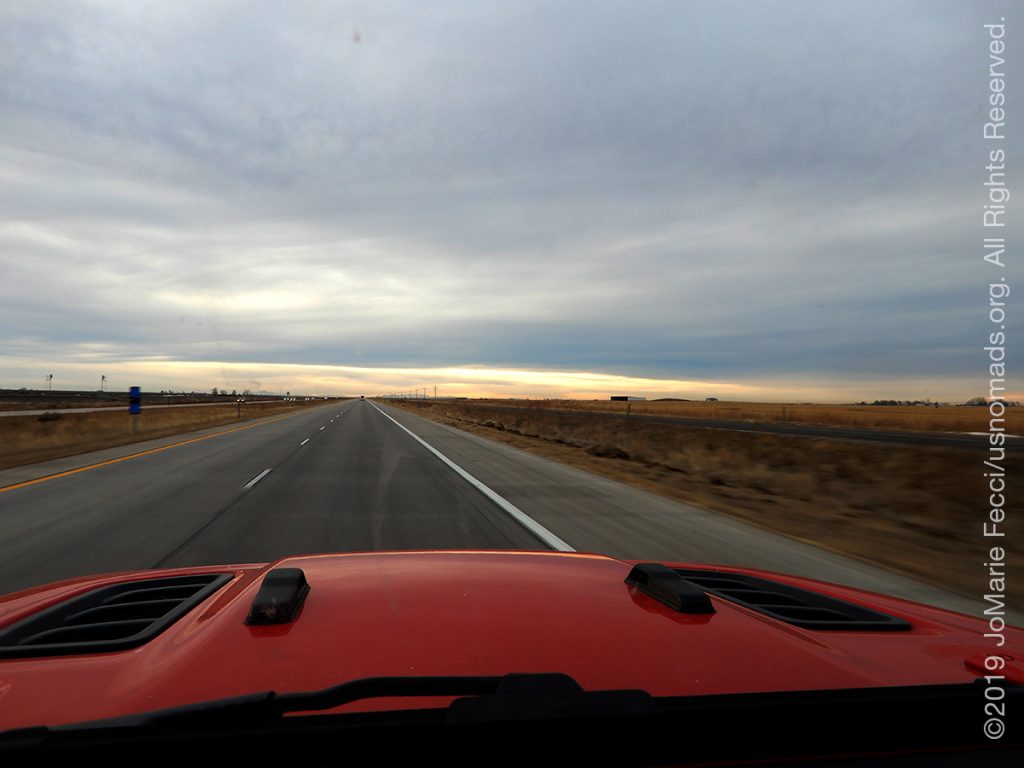 I crossed into Colorado and another time zone by late afternoon and caught my first distant glimpse of the Rocky Mountains far away. Even at this distance the mountains intrigued me. There was snow on the ground and the mountains were completely covered in white which made me worry about the crossing tomorrow despite the fact that the forecast was for no precipitation until Tuesday. 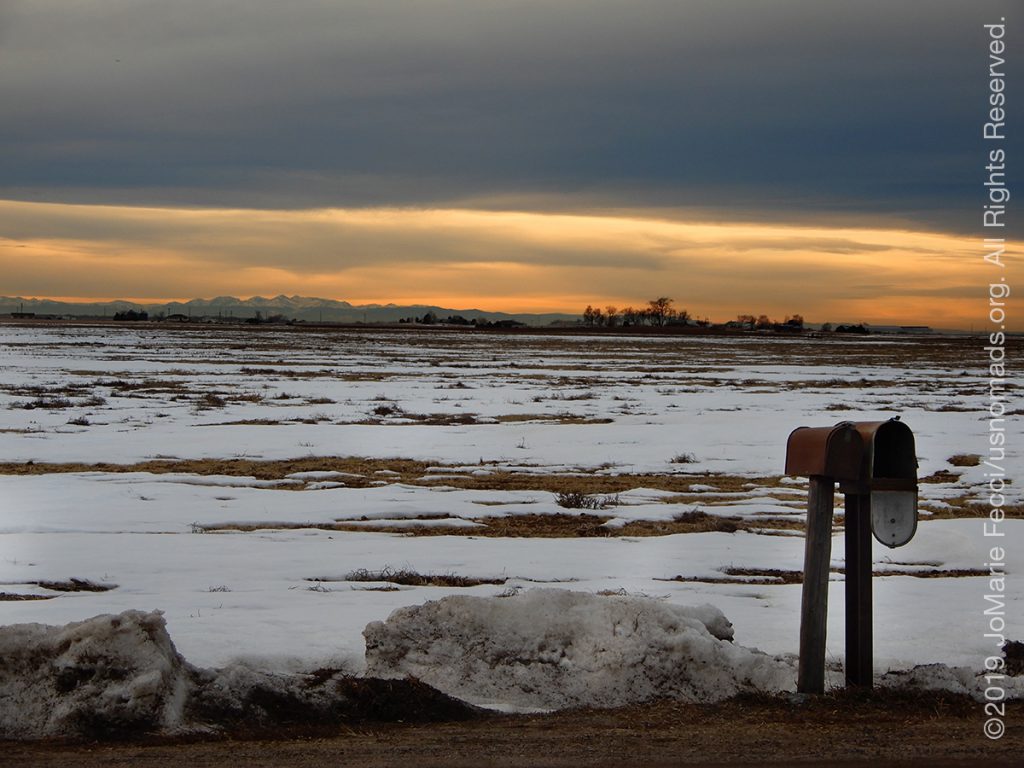 I stopped along the road to take some photos of the mountains as the sun was setting behind the clouds of a troubled sky. It was beautiful and the first time in my life that I am seeing these mountains. Perhaps also the radical transition from the flatlands of the Great Plains made the sighting of the mountains more dramatic. … 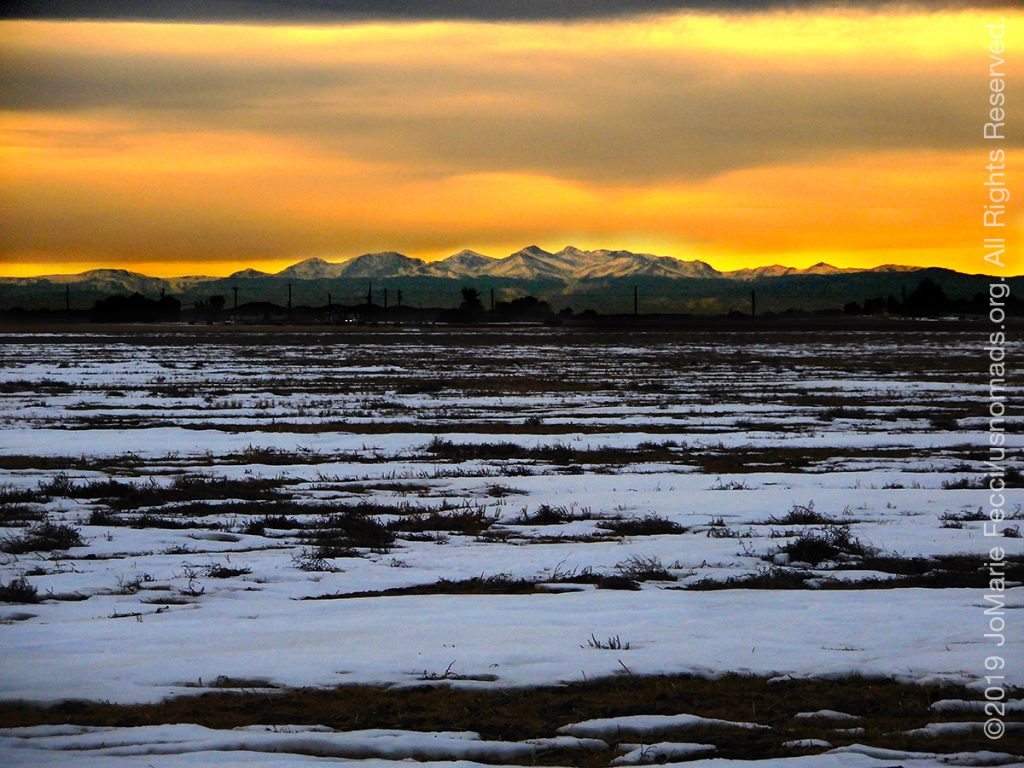 I still had a ways to go to reach Denver and the town of Golden, which is right at the foot of the mountains. Technically it was early enough for me to keep driving for a few more hours, but I made the decision to stop for the night at Golden and sleep there before beginning the mountain crossing in the morning. Partially I was thinking back to the “snow squalls” I’d experienced in Pennsylvania and imagining how much worse that could be in these much higher mountains, and partially I just wanted to be able to do the crossing in daylight so that I could see and experience what I imagine must be the “majestic” landscape I will be traveling through … 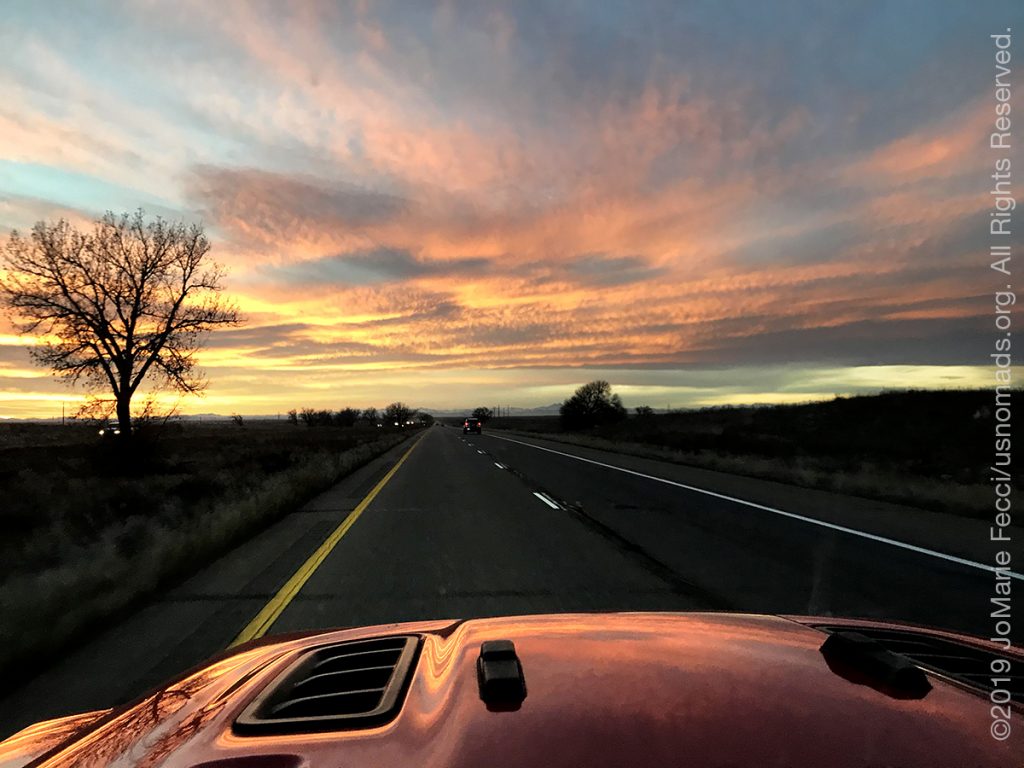