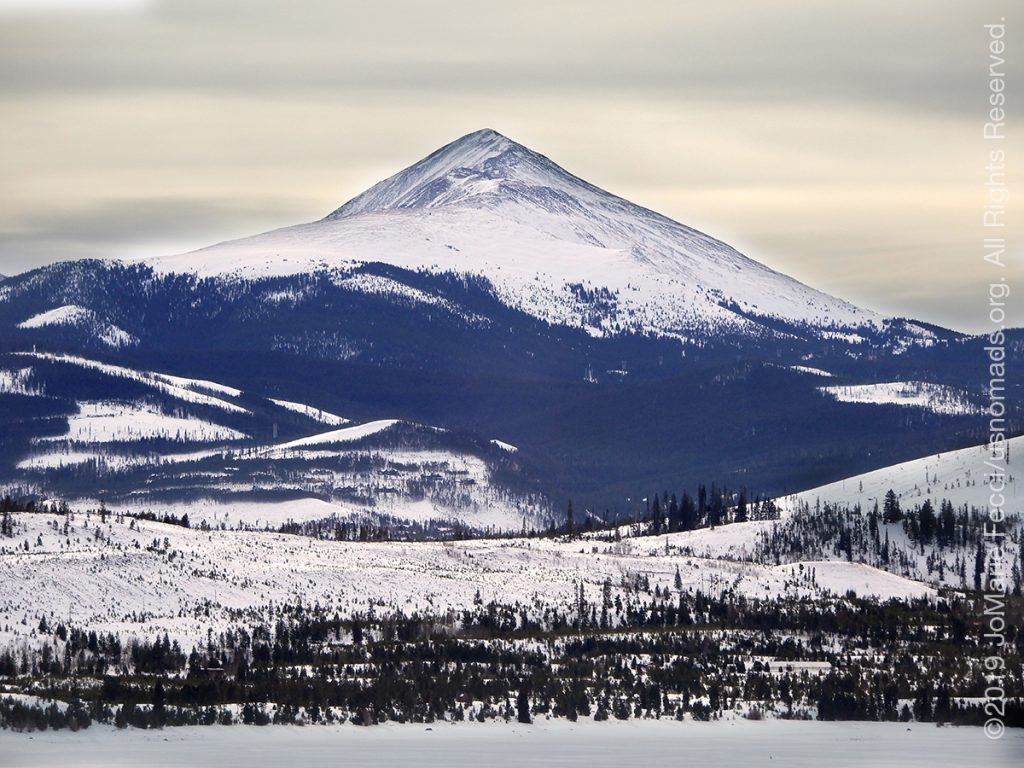 GOLDEN, CO to RICHFIELD, UT (23 December 2019) — Crossing the Rocky Mountains via the I-70 mountain pass was visually quite stunning, and it turned out that all my worries were for nothing, as the weather held up despite overcast and threatening skies. However, there are some serious storm warnings ahead.

I left Golden very early in the morning with the intention of making it across the mountains with plenty of time for some stops en route. As I began the drive I remembered the mountains and high passes in Kyrgyzstan and wondered if there would be altitude issues. I read somewhere that some of these mountains go up to 14,000 feet and altitude sickness can be an issue at over 10,000 feet. Although I don’t recall having any issues when I was in Kyrgyzstan or flying a single engine Cesna at 10,000 feet, I was still a bit concerned. I was even more concerned about road conditions that high up during winter. 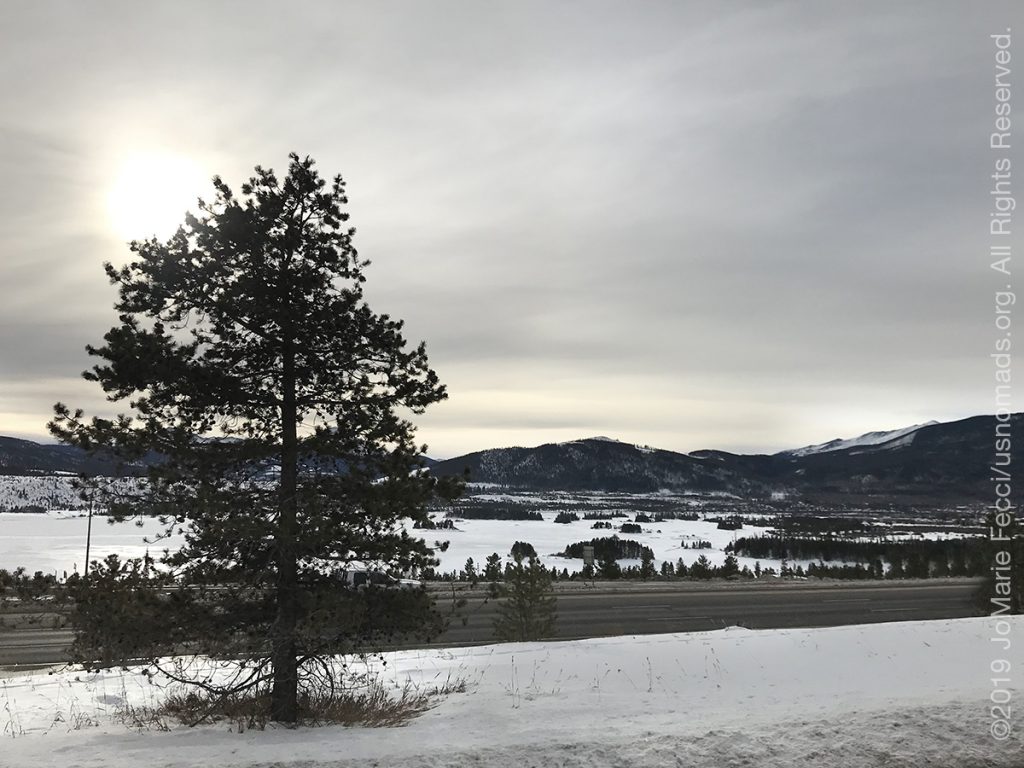 All of my worrying soon faded away as I slowly climbed into a winter wonderland on a modern American highway — plenty wide, smartly engineered and well-maintained. The I-70 was carved out of the mountains at a point where the elevation doesn’t get any higher than 11,000 miles, so there was no need to worry about altitude sickness. The drive itself was quite smooth and uneventful apart from a little bit of traffic towards the beginning. At the highest point where the tunnel goes through the mountains it was no different than driving the Midtown Tunnel in New York.

And the incredible beauty surrounding me in the mountains was inspirational. I stopped at every pulloff to take a few photos and savor the experience. I had never been in such high mountains during wintertime and there was definitely something a bit magical about the white frosted landscape with real Christmas trees growing wild on the slopes around frozen ponds. The overcast skies made it all soft pastel with a tint of winter grey. 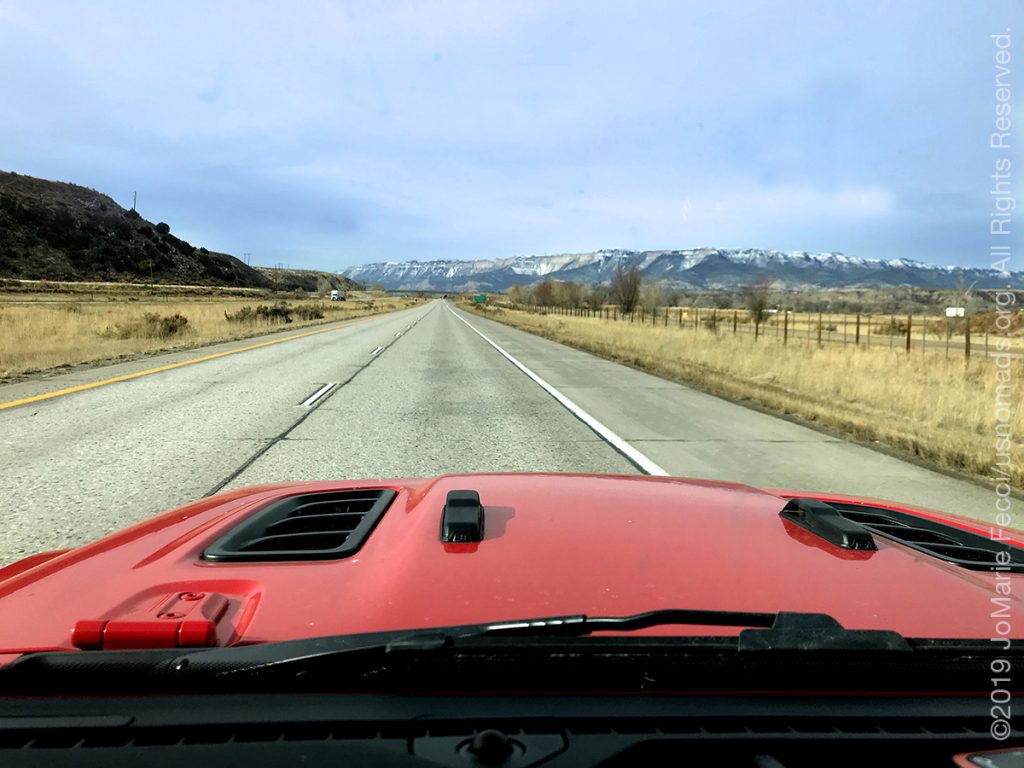 Once I began the “descent” I realized that “the mountains” would be a longer stretch than I imagined. It is not like going up and down one big hill. The descent goes slowly over lower mountains across a long way until eventually you realize you are “out” of the mountains without any kind of discernible “border” — just a slow transition to a flatter place. 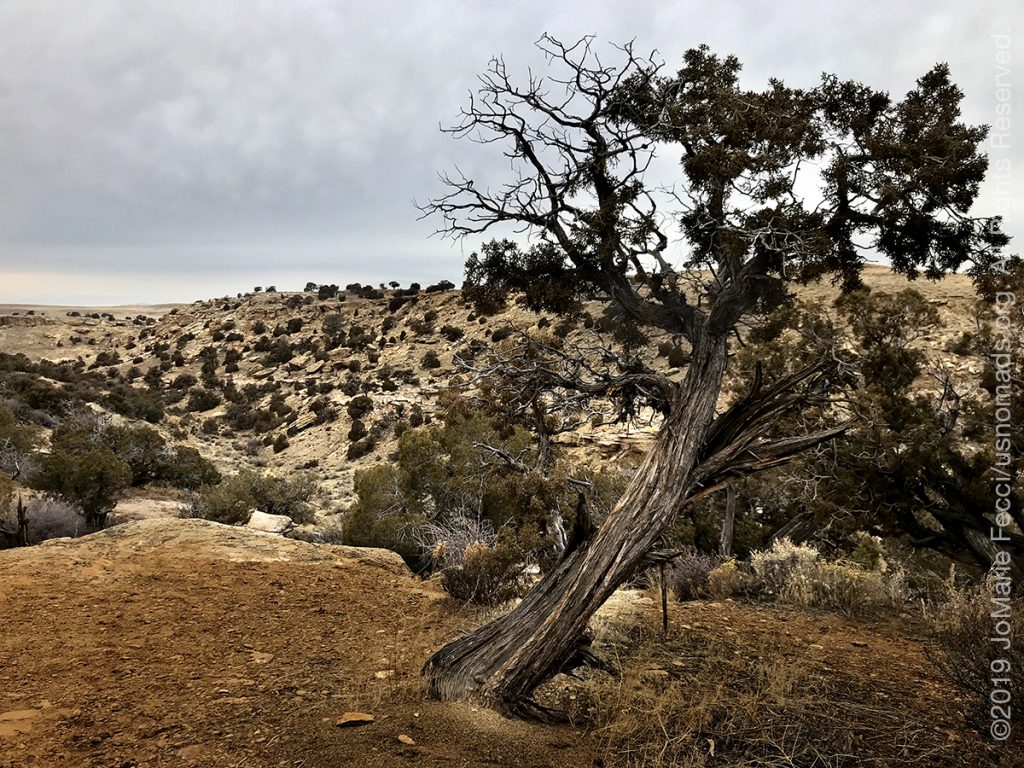 And the “flat” place isn’t really all that “flat” either because I had entered into the beginning of what I am calling for lack of a more precise term the “western” landscape — canyon, buttes, mesas and all sorts of odd rock formations, with plenty of mountains too. But this landscape has become “familiar” to me over time and arriving down into it was like meeting up with an old friend. I suddenly felt comfortable and there was a sense of having “arrived” even though technically the “road” part of my journey doesn’t end until tomorrow when I reach Nevada two states away. 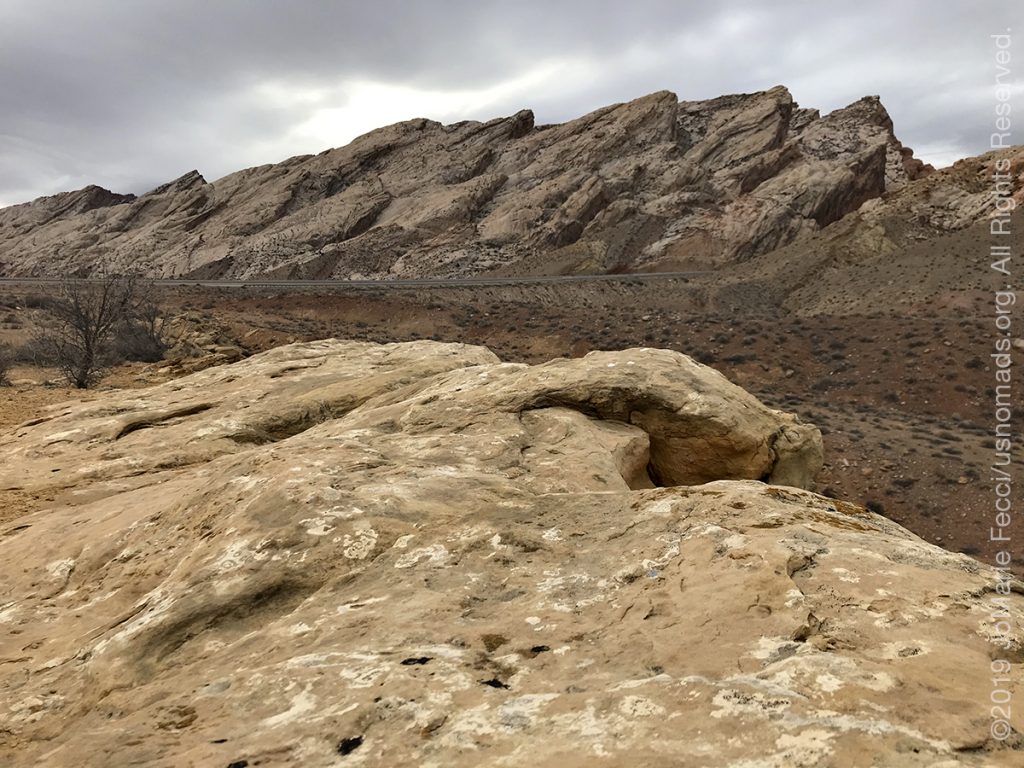 I made my way through the rest of Colorado with a lunch stop in Grand Junction, and the skies remained dark and grey and I have been hearing more about a storm coming in. Apparently the weather will turn bad tonight as the storm comes from the west. I will need to evaluate my plans for camping tomorrow night depending on its progress. Looking at the radar and forecasts available online it seems like the heavy part will pass over tonight and it will clear somewhat tomorrow afternoon into evening. 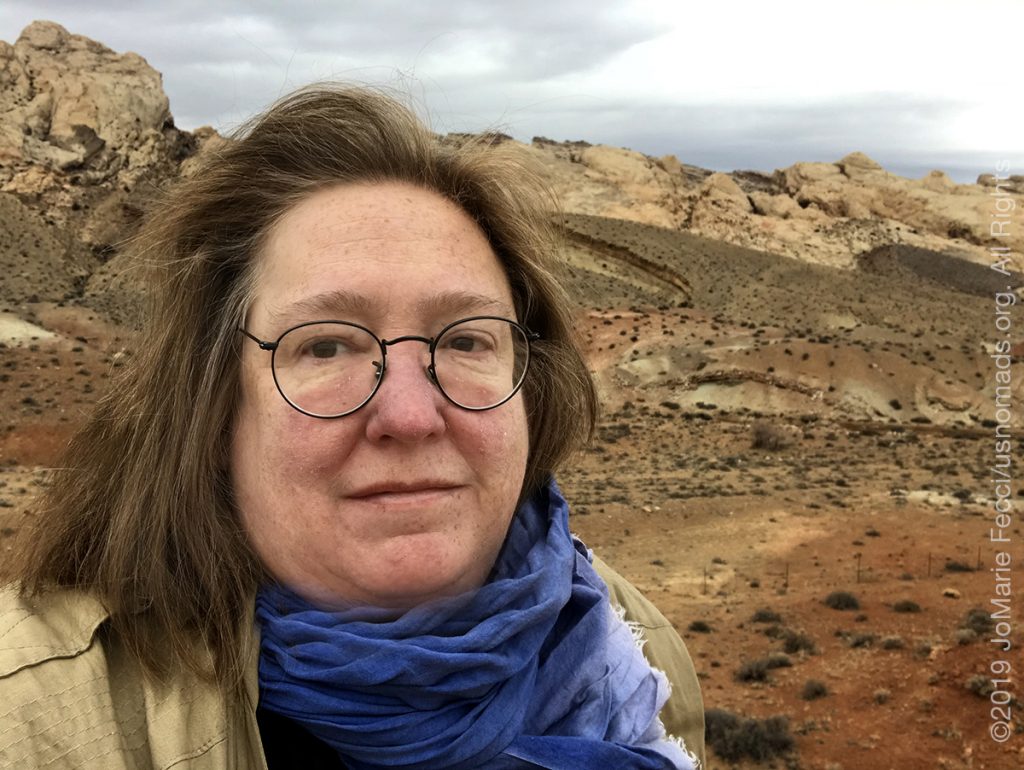 The I-70 continued into Utah and it felt bizarre to “pass” Moab without making a stop there. I had considered doing a short stop to visit the Arches for a walking break, but the day was getting away from me and with the overcast skies the colors would not be as beautiful as usual–or so I told myself as I tried to justify passing by one of my favorite places in the whole world! I maintained self-discipline and kept driving straight on I-70, racking up the miles.

I did make a short stop at the scenic overlook by the dramatic rock formations of the San Rafael Swell and stretched my legs while taking some photos. The I-70 beyond this point is “new” to me, as I have never been west of here in Utah before, and so I feel a bit like my “desert exploration” begins here. It is an arbitrary point. And where does the desert “begin” and “end” anyway (though I am pretty sure there is probably a technical scientific answer to that question). But in my mind I have divided this journey into two parts, this first “roadtrip” segment to get out west, and then the “exploration” segment in the desert backcountry. The “roadtrip” will “end” tomorrow once
I arrive to the Valley of Fire. I just hope I will be able to camp as planned. 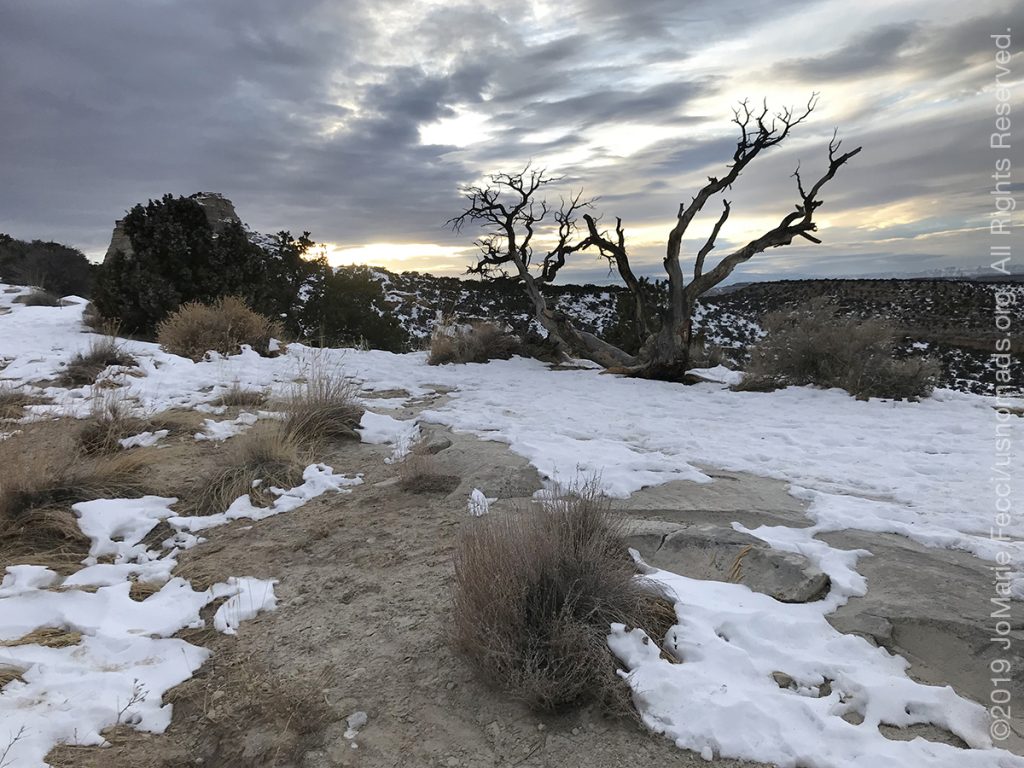 After a few photos at the “swell” I drove through the passage between the uplifted rock and continued with I-70’s route making a some more photo stops at the scenic overlooks as I drove. The last stop was at the Ghost Rock Canyon overlook where the road went along the edge of a canyon similar to some of the Moab nested canyons, and on top of the rim where we were there was a good layer of snow. 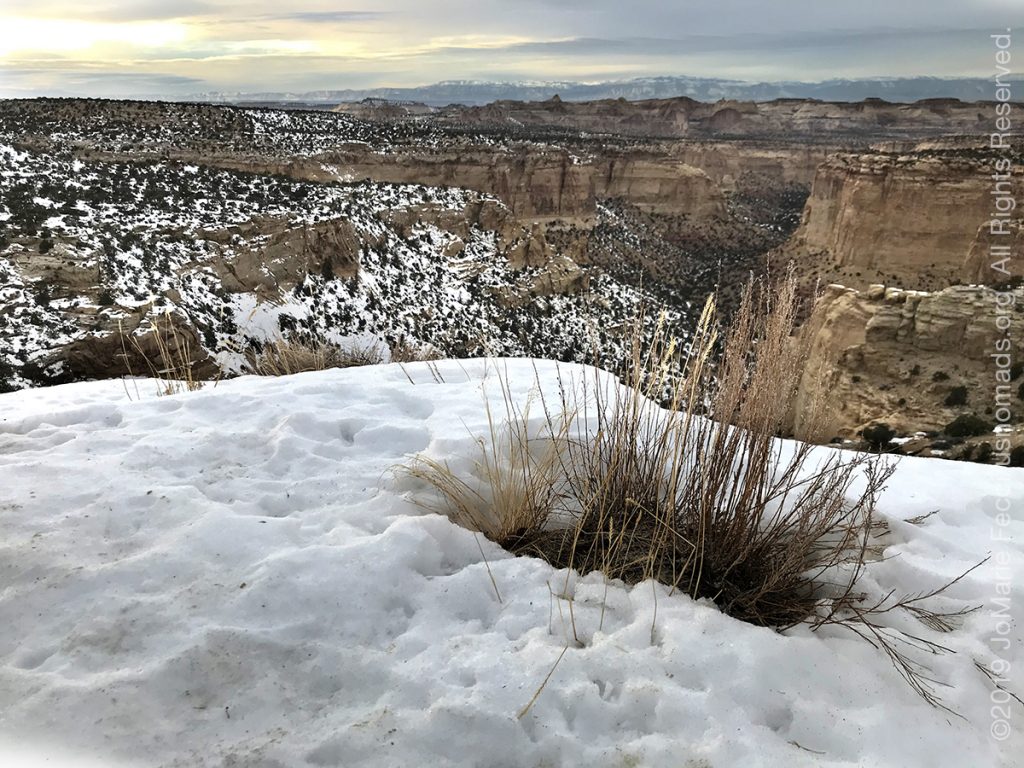 The skies were very troubled and a low layer of heavy clouds blocked the sun which was trying to set. As I walked around the rim carefully avoiding frozen bits of ice or snow, the sun managed to dip below the dark clouds and a few rays of light lit up the tip of some of the rocks, and the “Ghost Rock” began to glow golden inside the dark shadows of the canyon beyond the snow-frosted rim. It was one of those ephemeral light moments and I just stayed there watching it for a little while, appreciating the magic, as a few more rock formations “lit up” and transformed the landscape momentarily. Then it ended and dusk began for the canyon below. 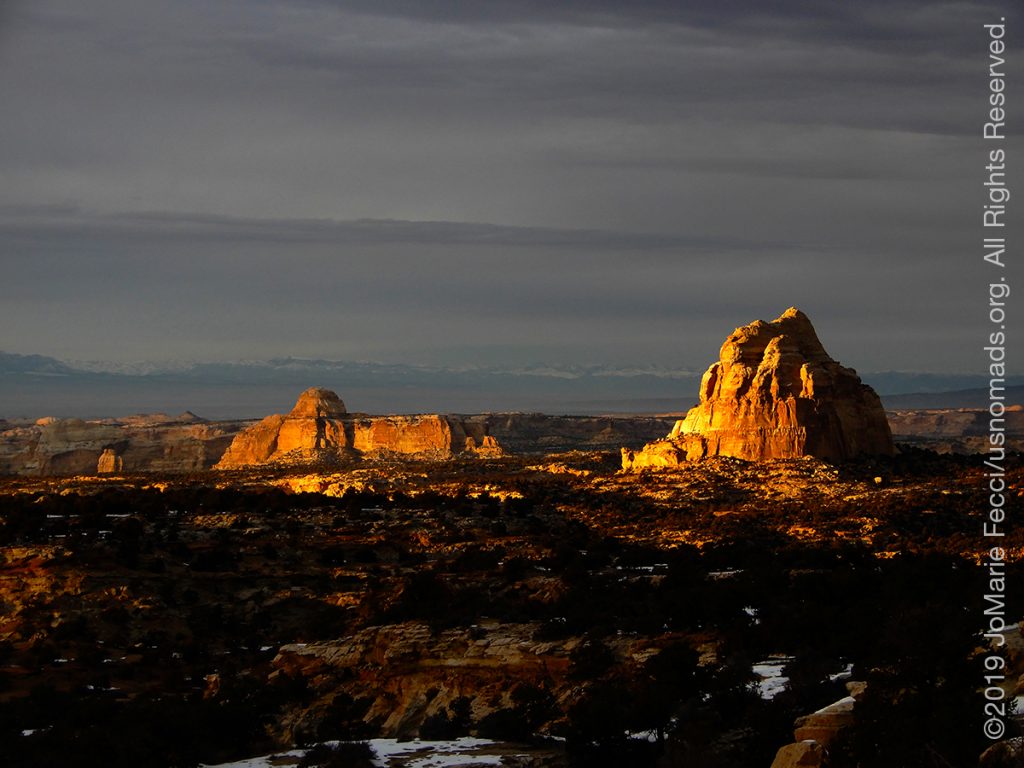 I got back in the Jeep and picked up the route for the last bit of driving to Richfield, UT, where it was cold but not raining when I arrived. I ate early and went straight to bed afterwards hoping to get an early jump on the weather in the morning. 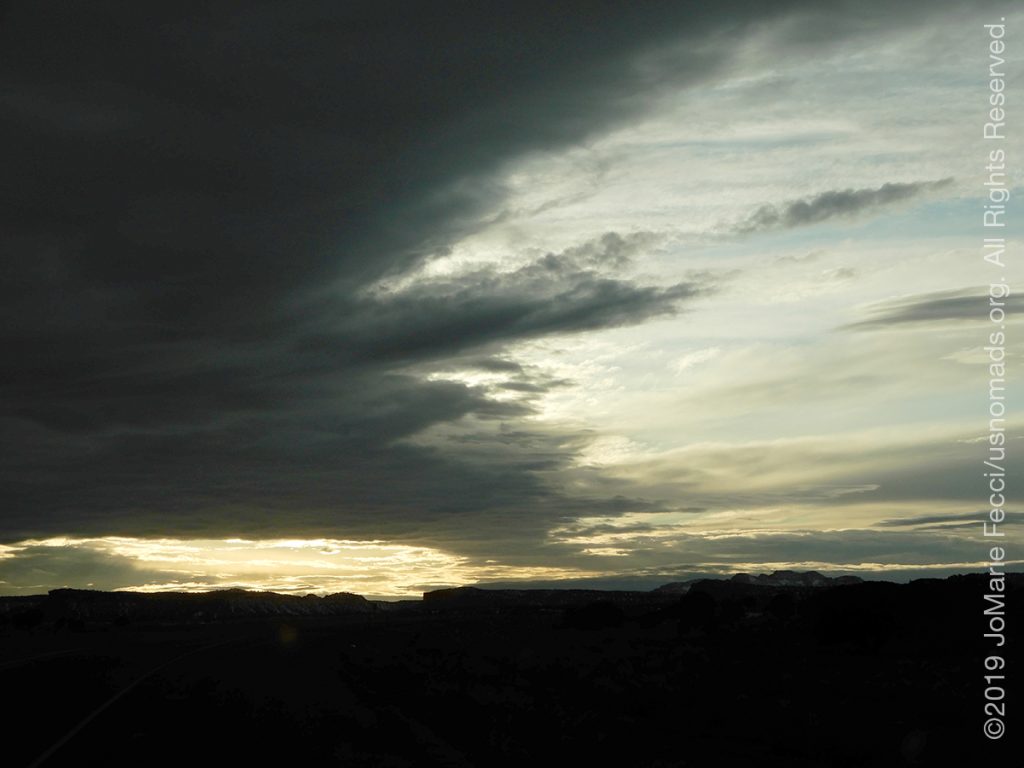