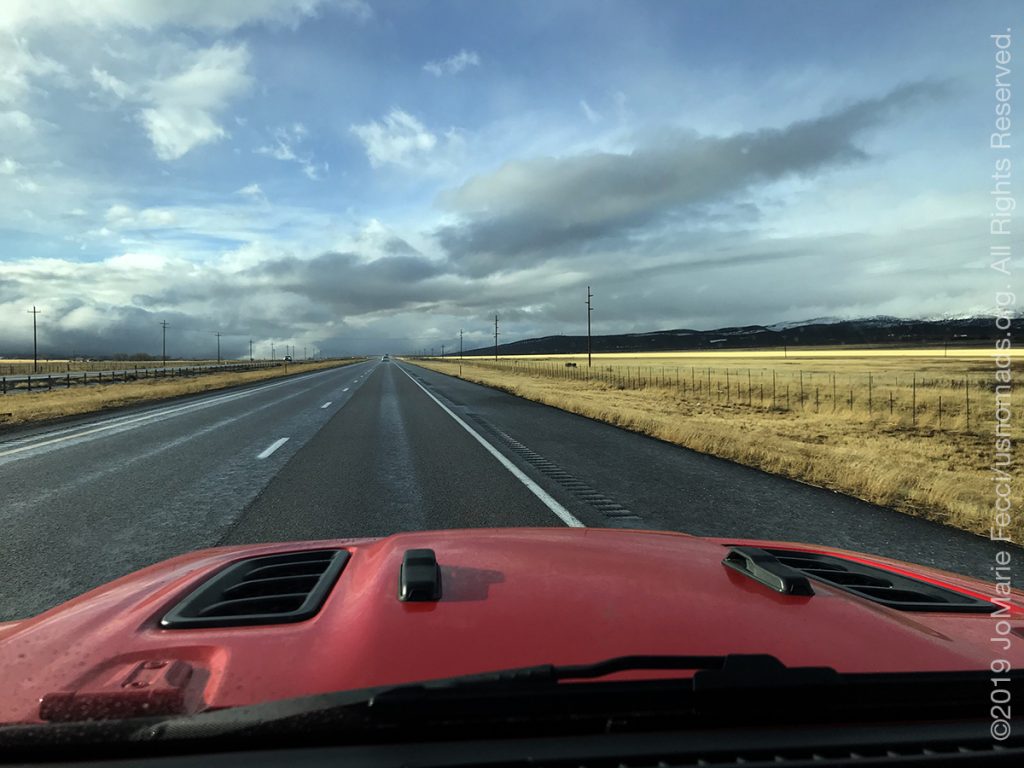 RICHFIELD, UT to VALLEY OF FIRE, NV (24 December 2019) — Up at first light this morning and anxious about the weather conditions despite the fact that there was not any precipitation happening in Richfield. All the “Winter Storm Warning” and “Winter Storm Advisory” notices I was getting made me worry about what could happen on the road ahead, or more importantly at my destination — The Valley of Fire, where I was planning to camp for the next few days. I looked at weather radar and forecasts, and ever the optimist, decided to go ahead with my plan counting on a weather forecast for Valley of Fire that said rain would stop by 2pm.

I knew I was taking some risk in ignoring all the warnings, and my experience of the “snow squall” back in Pennsylvania was still top of mind, but the whole “point” of this long journey was to spend Christmas under the stars in the Valley of Fire, and the thought of having to “celebrate” the holiday alone in a random non-descript hotel room eating canned ravioli from my emergency supplies instead of grilling my Christmas dinner at camp was too depressing. I was determined to do my absolute maximum best to make Christmas camp a reality.

The last segment of the I-70 joined up with the I-15 heading southwest not far from Richfield and I was encouraged by clear skies ahead, though I was very aware of the dark clouds that hugged the mountains to my left. The road was empty and weather advisories continued to flash on my GPS screen as I drove on.

Stopping for gas and fire wood in St. George, I noticed a few palm trees planted on the edge of the property and considered them my usual harbinger of sun and warmth, though the sky above remained overcast. The road turned down into Arizona for a few miles, and I wondered if I was passing the North Rim of the Grand Canyon somewhere near here. Maybe that was where those dark clouds were hovering. Though soon enough the clouds began drifting into “my” sky. 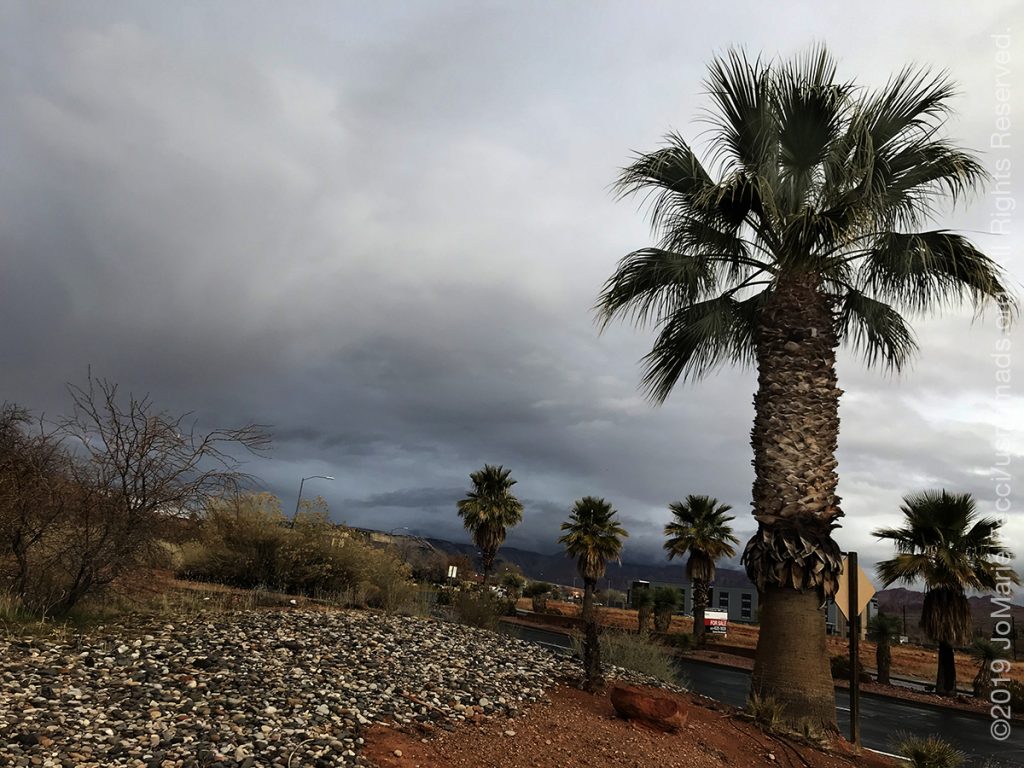 It began to rain in Nevada. I pulled up the weather radar as I drove, and looked at the storm track. It was moving east, and according to the radar it had just passed Las Vegas. Valley of Fire is only roughly an hour’s drive northeast of Las Vegas, so if the storm kept moving at the same pace, it should indeed clear the area in the afternoon. I wanted very much to “believe” in the weather forecast as I continued westbound in the rain. 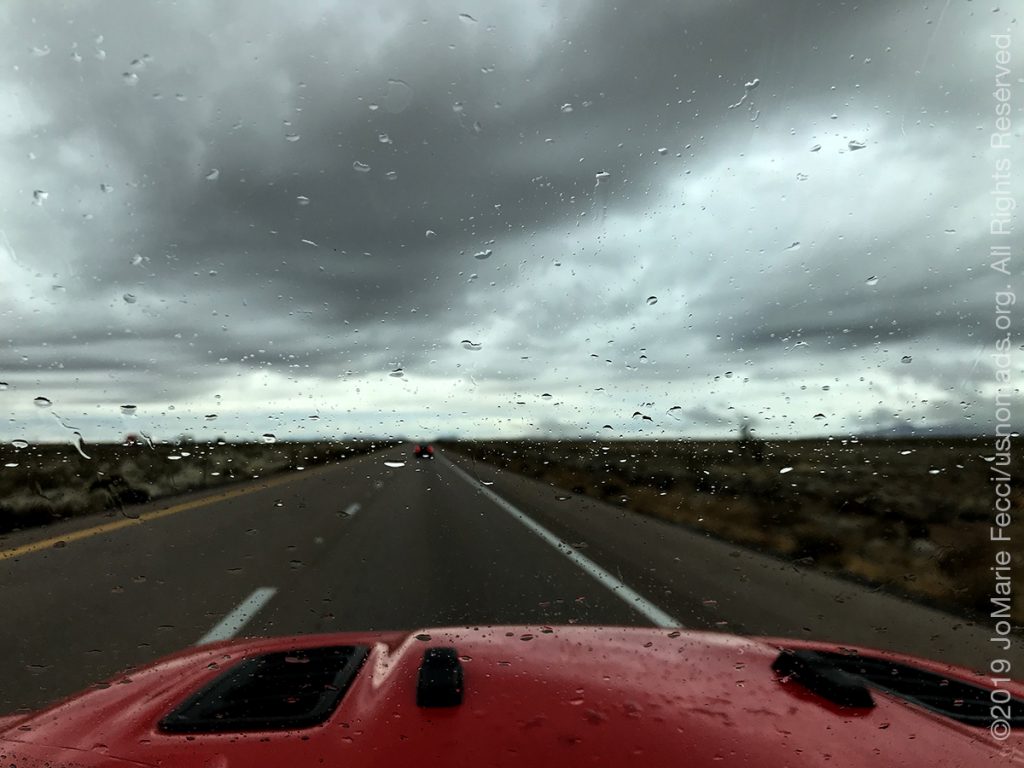 When I exited I-15 for the final leg of the drive on Route 169 through Logandale and Overton the rain was a light but steady drizzle. I remembered from photos I had seen of the campsites at Valley of Fire that they had shade shelters, which should serve to keep me dry in the drizzle, and pressed on with guarded optimism. After all, it was Christmas, if ever there is a moment to be optimistic, it should be this time of year. 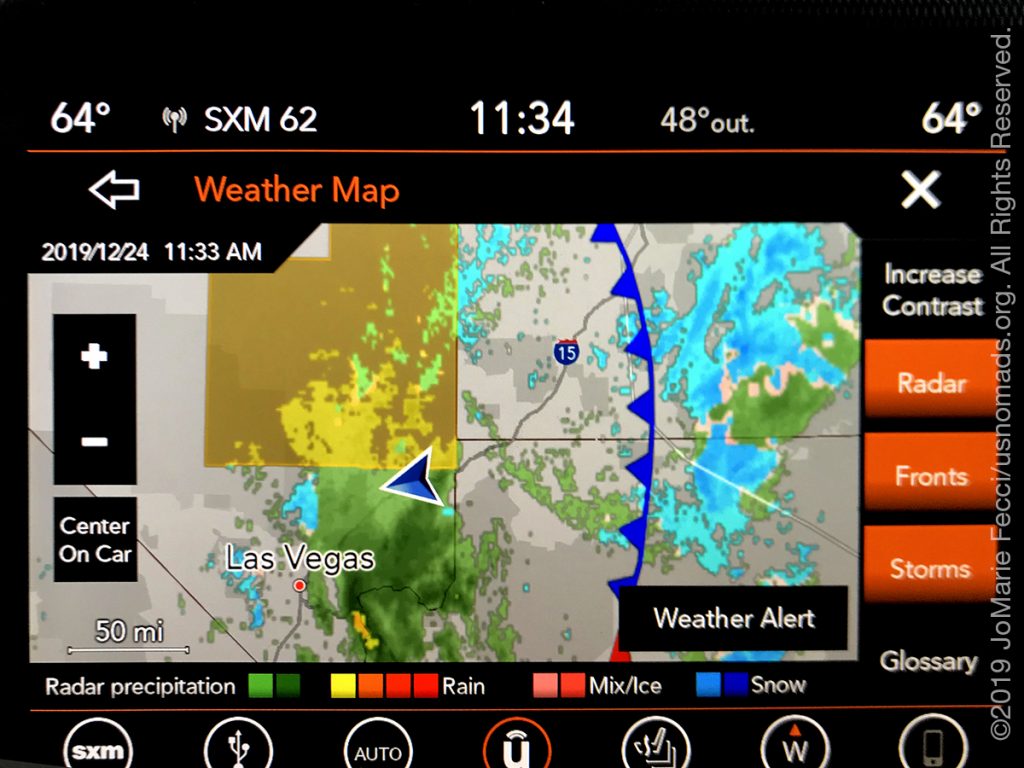 I passed a mass of RVs camping on BLM land outside the boundaries of the park and suddenly had a worrying thought that maybe there were lots of campers INSIDE the park too. People with RVs don’t have to worry about the rain or cold, and there are not that many campsites within the park. I decided to make a beeline for the campground rather than pausing for my usual series of photostops. The red rock landscape was not looking all that beautiful in the rain anyway. In fact it was kind of dark and foreboding. 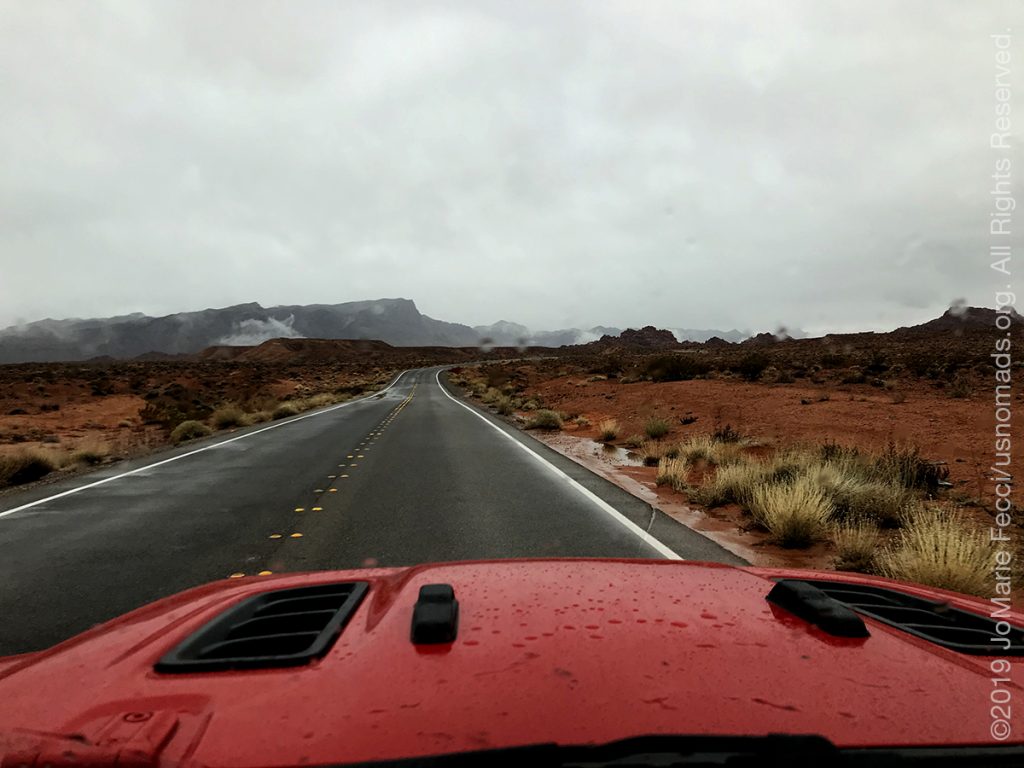 I did have to stop to pay my fee at the Visitor Center, and as I pulled into the parking area I was shocked to see the huge number of vehicles there. There was almost no where to even park. After driving around a few loops I found a spot at the furthest end of the parking lot, and made my way into the Visitor Center which was crowded with tourists, including large groups of Chinese and Indian visitors who were packing into the gift shop. Luckily not too many people were ahead of me at the information desk, and the park ranger told me I had better go check out the campground to find a spot before paying. He told me the second, more remote campground was open but suggested that I stay in the larger Atlatl Rock campground if I there was room. 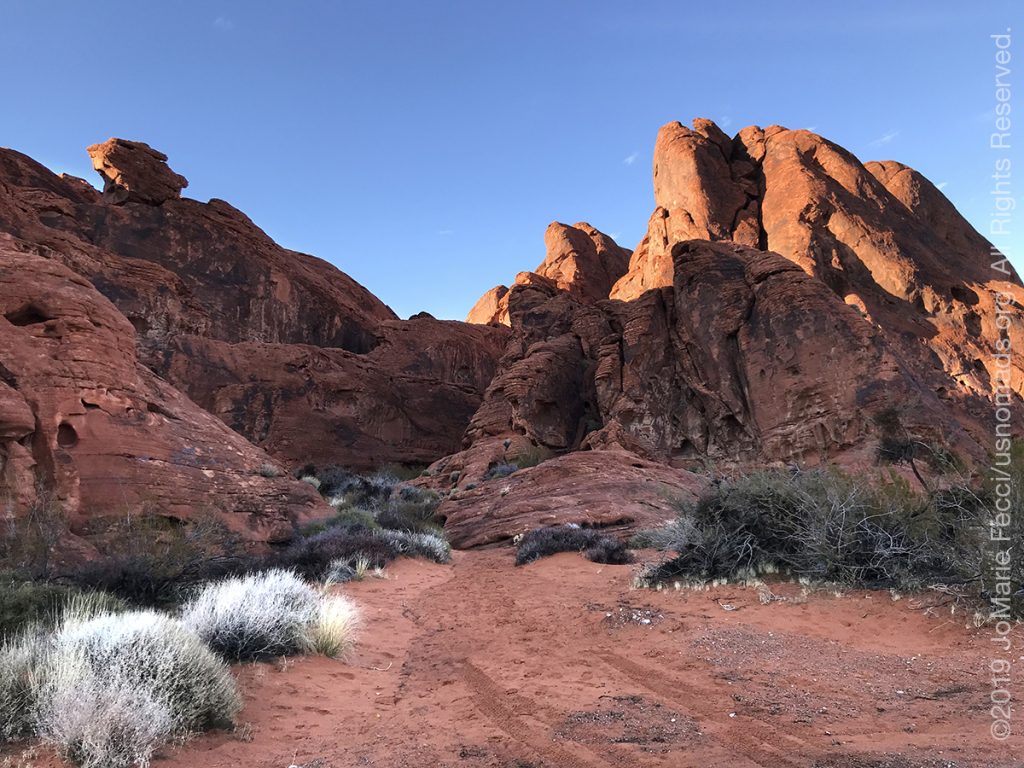 The rain had slowed while I was in the Visitor Center, and by the time I reached Atlatl Rock it had pretty much stopped. And even better news was that there was a great spot open and waiting for me to set up my Christmas camp. 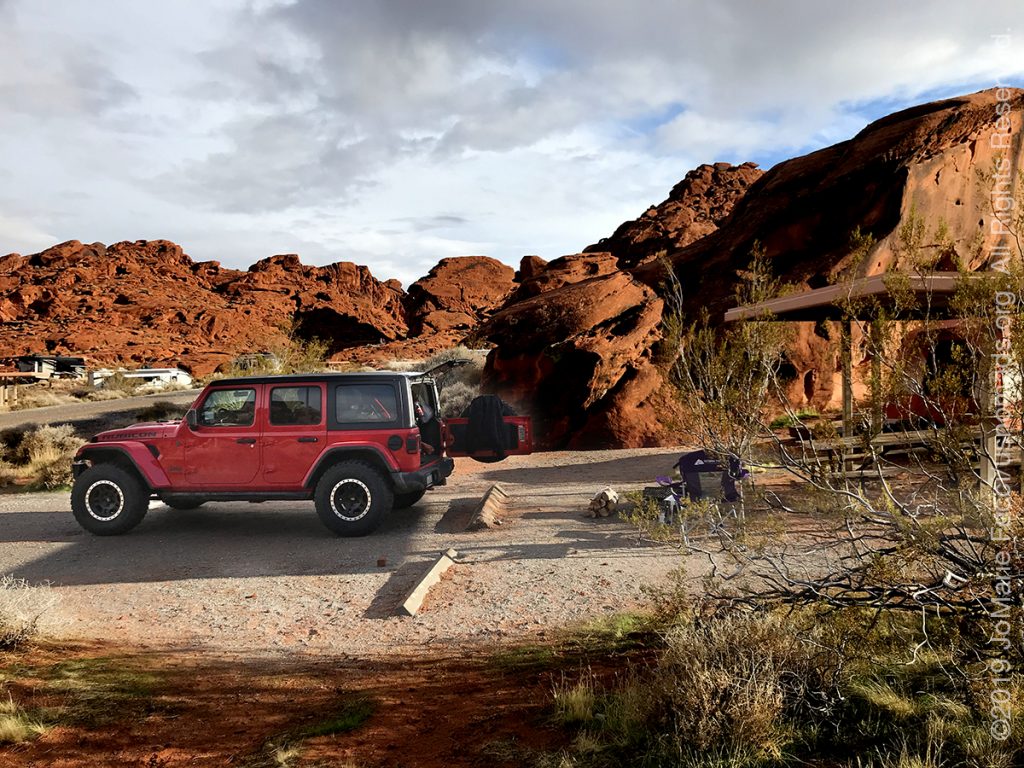