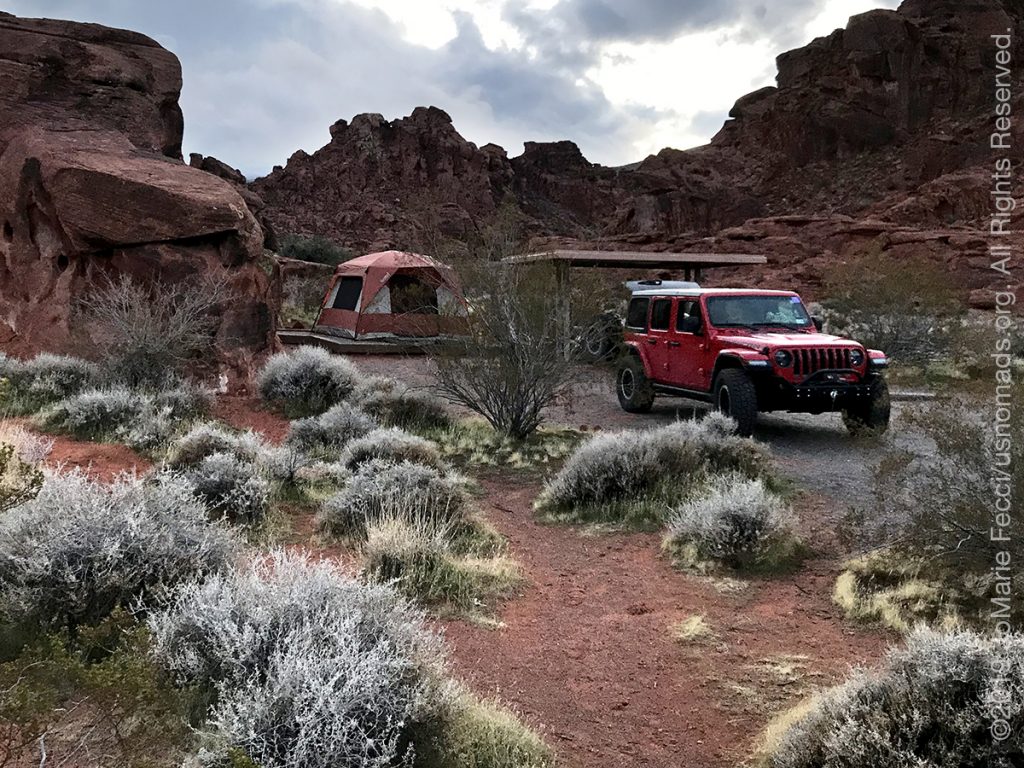 VALLEY OF FIRE, NV (24 December 2019) — Got the tent set up and established my campsite as the sun struggled to come out from behind the clouds. Mostly the struggle was unsuccessful, but at least it was dry, and that made a big difference while putting up the big tent. I decided to use the larger tent as I will be here for a few days and want to make it as comfortable as possible — especially with the prospect of rain, where it is nice to have a tent tall enough to stand up in and walk around and do stuff while inside.

I reorganized my bags and boxes of food and camp gear and basically “started” the backcountry exploration part of my trip which will have a very different pace than the last week of hectic purposeful marathon driving. Now I am “here” in the desert and I can slow down and savor my experience. I had made a risky decision to come out here to camp in light of the weather forecasts, but my risk was rewarded and I would be able to spend Christmas eve here under the stars amid the otherworldly rock formations in the Valley of Fire. 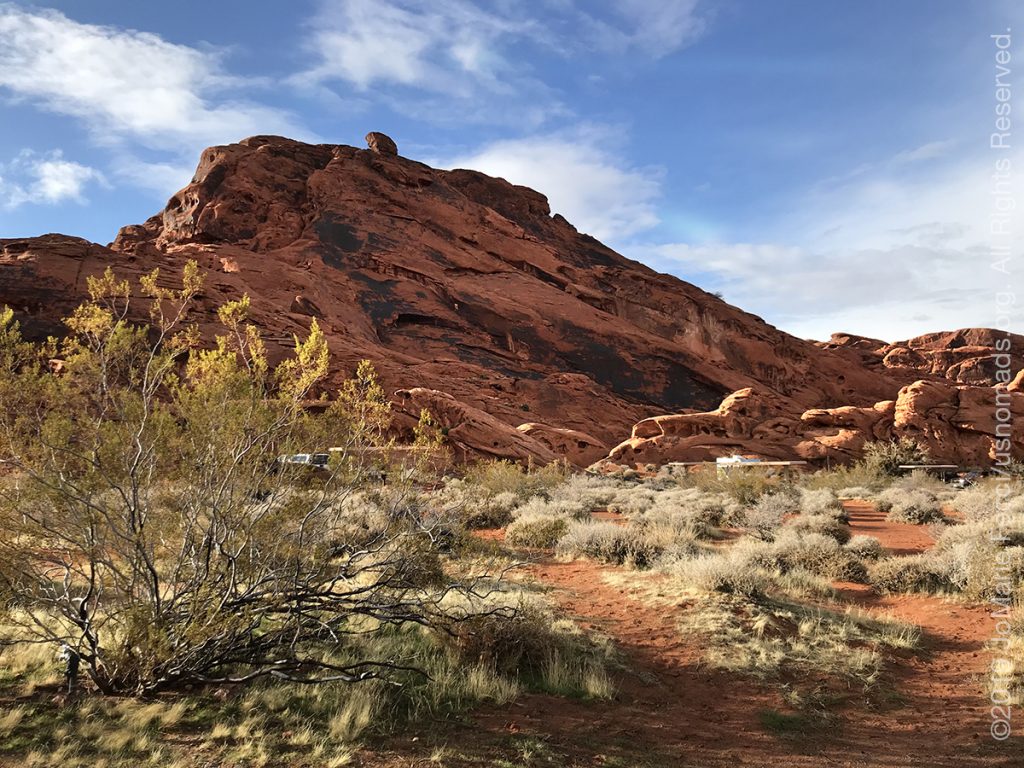 It might be a bit wet or cold, but it is well worth any slight discomfort to be able to experience this environment and delve more deeply into the desert landscapes to try to understand the interconnectedness of place out here. A large part of my journey is focused on understanding the relationships of these “different” deserts that all join together into an amazing and fantastically unique landscape populated with different plants and animals that only exist here. 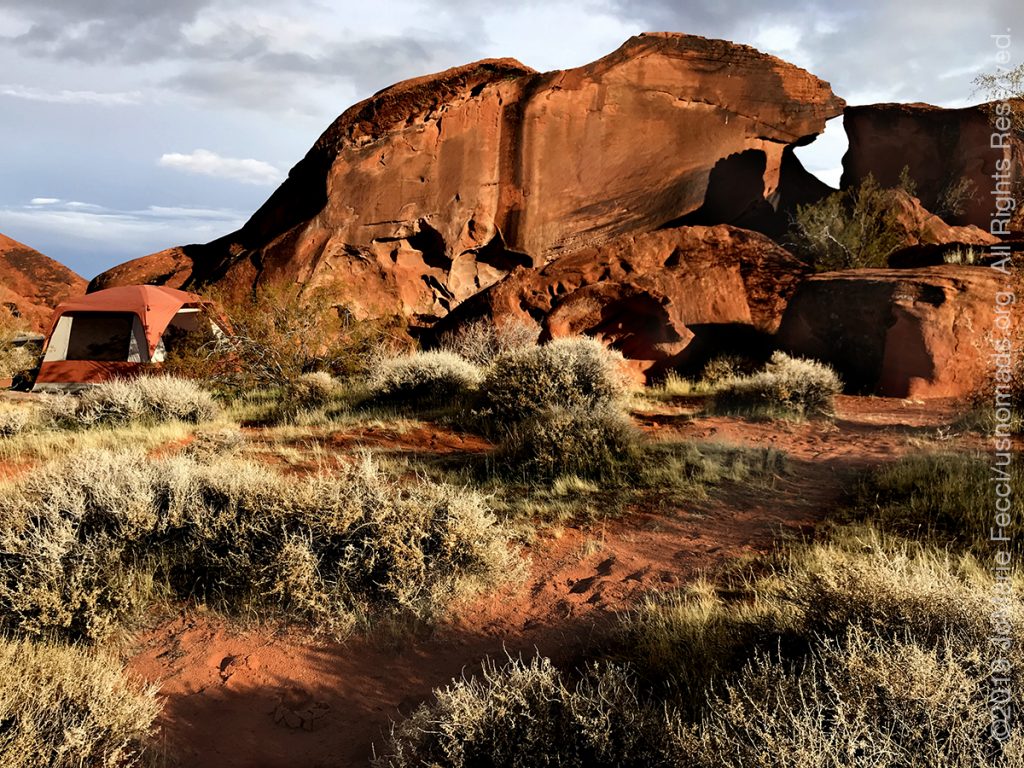 As I settled into my new space I took a short walk around the campground area to get to know the layout of “home base” and just to marvel at Mother Nature’s sculptures, playfully eroded into all kinds of fantastical shapes. There is a part of this park where the rock erosion reminds me of the contorted faces to be found on Rodin’s “Gates of Hell” sculpture. The rock was cut by the wind, and that reminded me that I’d read how it could get pretty windy and cold here at night in the winter. I made sure to put on layers as the afternoon progressed, and prepared my Christmas Eve fire well before dark. 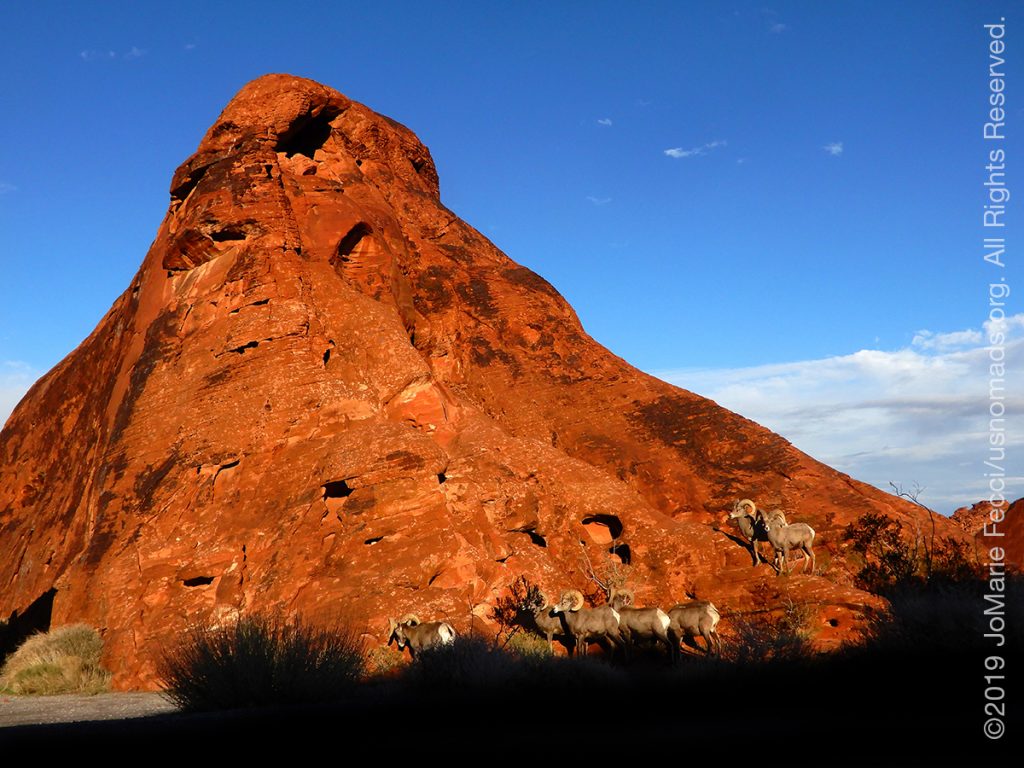 With everything ready for my holiday celebration to begin I went on a brief “wander” and before I got very far I was treated to an amazing Christmas present from Mother Nature and the animal spirits. The late afternoon sun slipped under the clouds and set the rocks aglow in that intense red-orange neon palette and there on the butte just across from my campsite a small herd of Big Horn sheep were “browsing” some low bushes for their holiday meal. I couldn’t believe my eyes. I have only ever seen Big Horn sheep in the wild once before in my life, and that was on a very lonely section of the El Camino del Diablo Jeep trail along the border with Mexico, when I stopped in a desolate canyon to photograph the Jeep, and heard the sound of a rock falling and looked up to the mountain behind me where I saw movement — three Big Horns up on the ridge. I managed to get a distant photo or two of them before they disappeared, and that was amazing. This time it was an entire herd and they were not that far away from me. 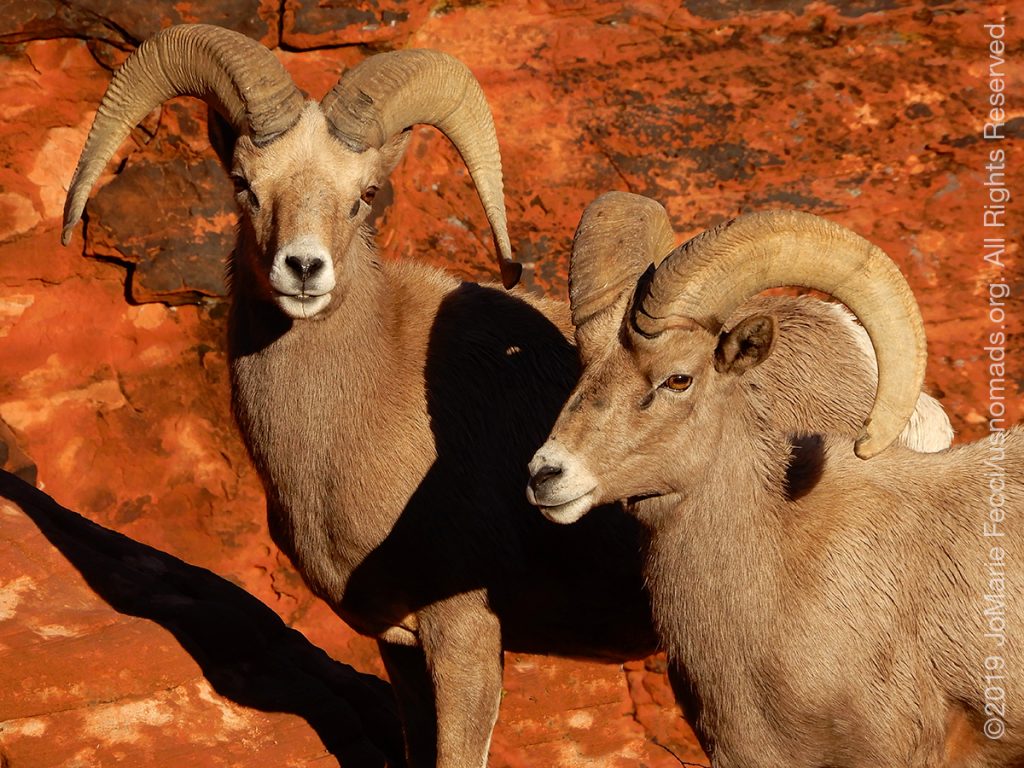 They were busy eating and though two of them kept an eye on me they did not run off. I was able to observe them and make some good photos of the herd and some individuals and the rock formation. I was in awe of the serendipitous moment on this magical day of the year. Nature’s gift to my eyes and my spirit — perhaps a recompense for being brave enough to make it out here in spite of the warnings. 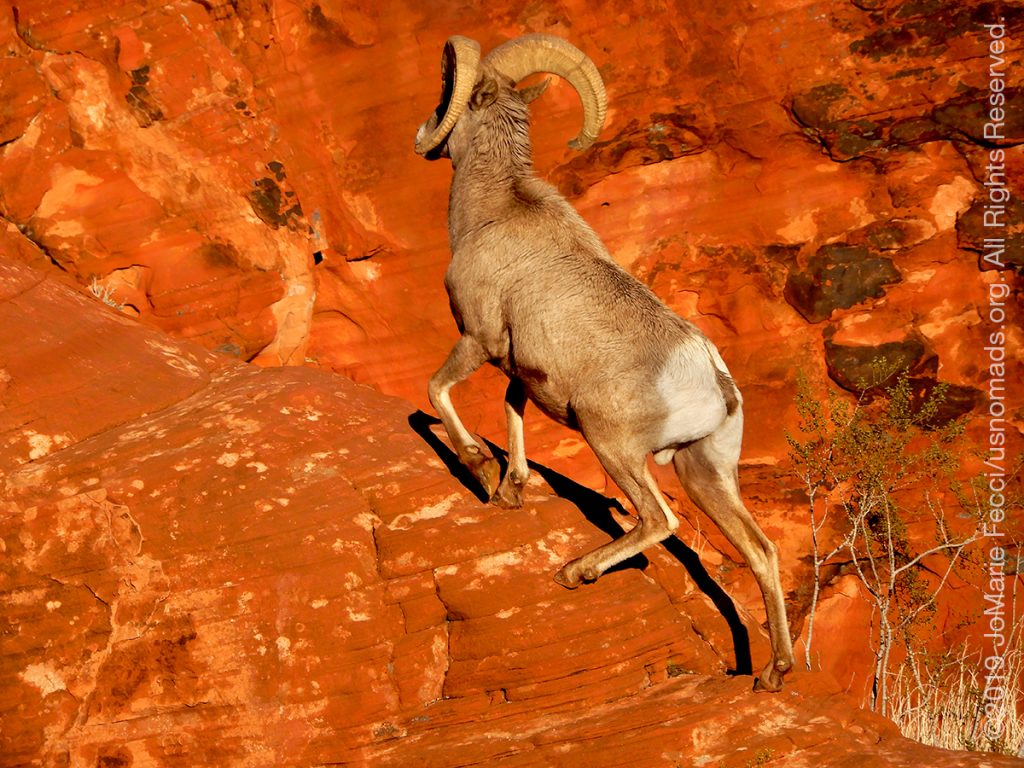 I spent a while with the Big Horns, maintaining a respectful distance and only moving ever so slowly, and they let me continue until eventually they lost interest in the bushes there and moved on their way behind the butte. After they were gone I went closer and took some photos of their tracks so I could recognize them if I saw them again. They are very similar to deer tracks, and had I not seen the animals I would have just assumed the tracks were from mule deer, which are also found out in the west. 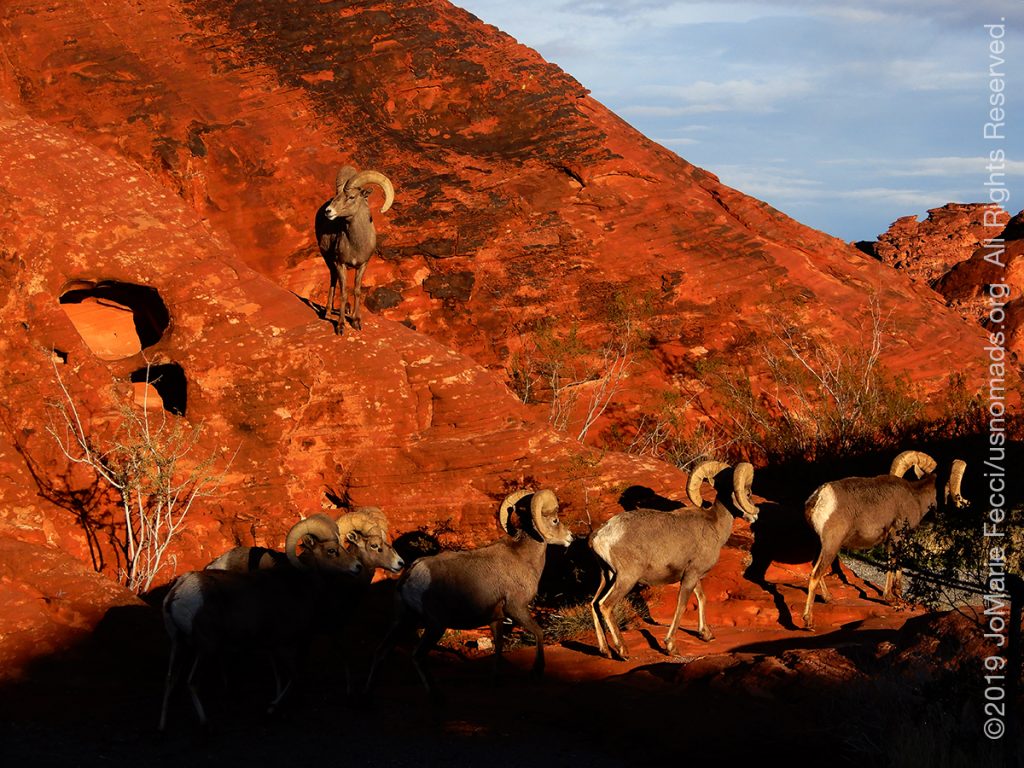 Excited by my encounter with the Big Horns I returned to my campsite and began my holiday celebration lighting my fire, popping a bottle of champagne and making a toast to those departed and those still here on earth, in the name of the Christmas holiday. My surroundings were in a very different place than the desert where the first Christmas took place, but I was in a desert, surrounded by rock formations and animals, kind of similar to depictions of the “manger” scene in the classic rendering of the first Christmas. 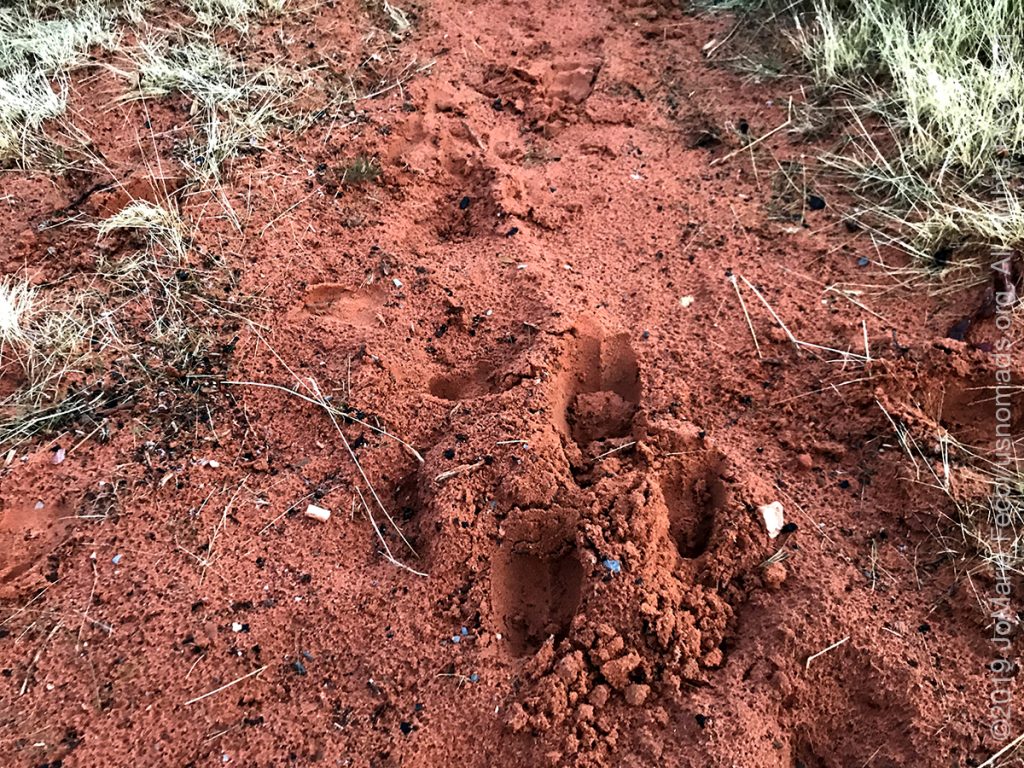 The sky was cloud covered, and as darkness set in, the temperature began dipping quickly. I added some logs to my fire and moved my chair closer. This year I could not make a huge “bon fire” sized blaze as I have done when I camp in the forest in Florida where there is so much good firewood to be found lying around on the ground everywhere. Here in the desert there are no trees. No downed wood. I had made sure to purchase a very big supply of fire wood, and kept adding to it as I got closer to the Valley of Fire, picking up my last few bundles at the supermarket in Overton. The Jeep was as packed with firewood as it could be, so that I would have enough for Christmas Eve and Christmas Day, even if it was really cold. Still, it was early, and I was being somewhat economical with the wood, as I had no idea exactly how cold it might get. 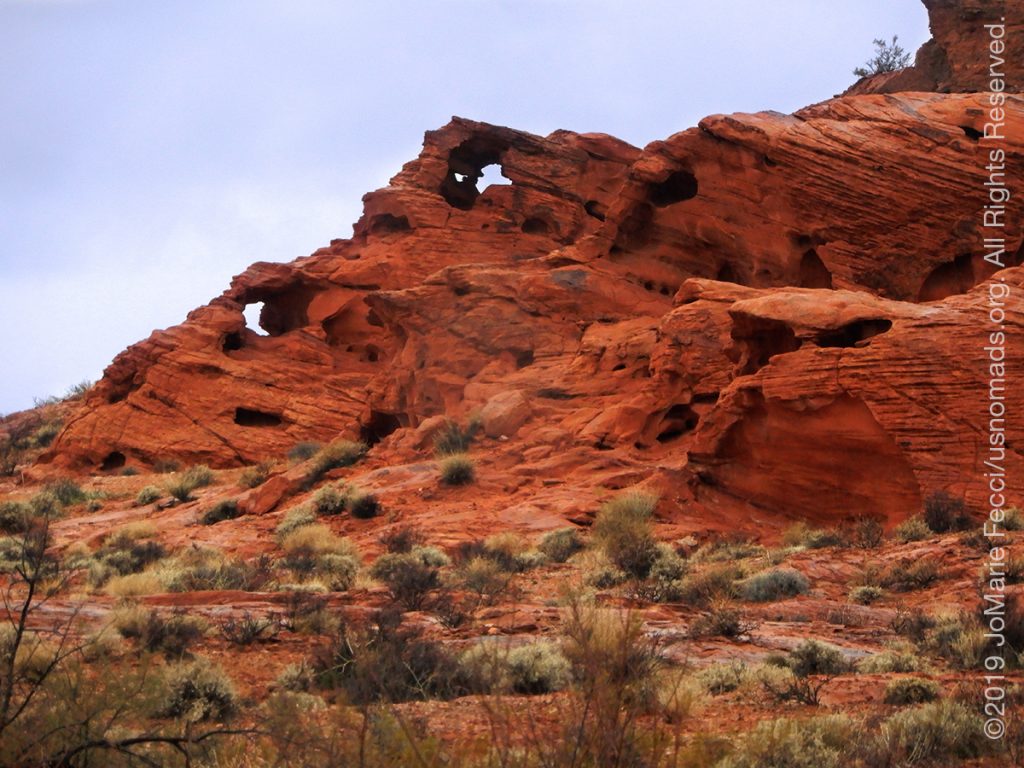 The warmth from the fire and the champagne combined to put me in a very merry mood as I made my Christmas Eve dinner and sat my vigil until midnight. All the other campers had long ago gone to sleep, and I looked out over the campground and could see one or two RVs that had put up some holiday lights in honor of the day. I was happy with my choices and my determination to get out here, and as I let my fire’s last embers burn out, I lit the Mr. Buddy Heater inside the tent, and went to bed still in awe of the Big Horn encounter… 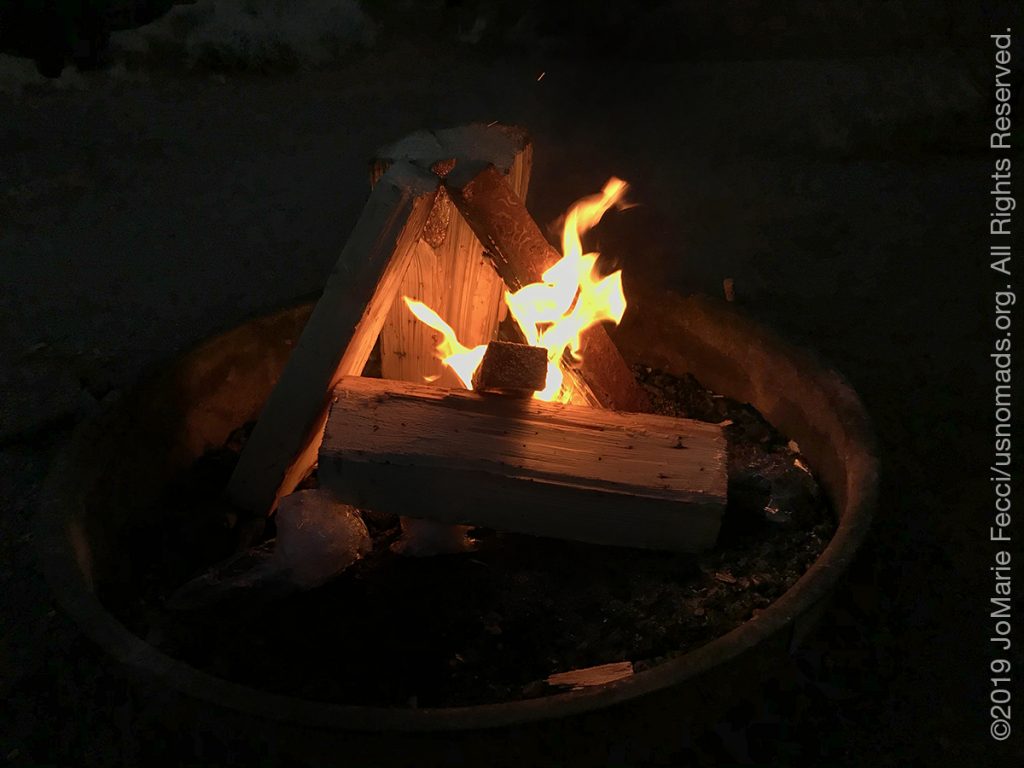