LEG 3: THE DUNES OF MERZOUGA 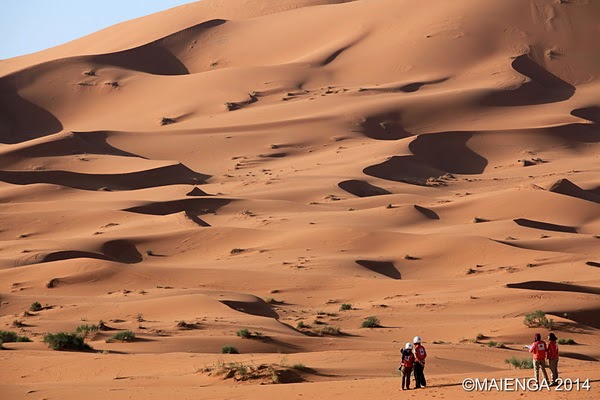 Today’s Leg takes the Gazelles through the heights of the Erg Chebbi, the famous dunes of Merzouga

22 MARCH 2014: Merzouga: the most anticipated and most dreaded leg of the Rallye. Today the Gazelles will face the majestic Erg Chebbi dunes. There is a lot for the teams to remember when facing the dunes: they will need to air down their tires and always approach the slope head-on. Driving in dunes is a bit like surfing: angle is everything.

“Don’t approach them as insurmountable obstacles. Think of the sand as a moving substance. You need to manage your speed: don’t assume that the faster you drive, the less likely you are to get stuck. It’s not true”, warns Ludovic Taché, the rally’s sporting director.

Teams can select the level of difficulty they are comfortable with, but points are allocated according to difficulty, so in choosing a route each team is deciding how competitive they hope to be overall (teams who check off all 3 of the “X” CPs will have 0 penalty, those who choose the 3 “Y” CPs will have a 90-point penalty while the Z route will earn a penalty of 180 points). The X route, the “black” line of the Rallye, snakes through the highest peaks in the heart of the erg. Route Y is an intermediate level, and Route Z is the most accessible. However, all 3 routes cross Erg Chebbi in one way or another, so there is no escaping the sand! (The crossovers have their own route.)

In addition to good driving in the sand, the Gazelles will need to accurately assess their abilities. The teams must decide their route before seeing it — once they reach CP1 for a specific route they have committed to finishing that level, and cannot change their minds. The choice of level becomes strategic as teams must estimate their capabilities correctly — Gazelles who overestimate their skills could lose a great deal, while those who underestimate themselves or opt for a more “relaxed” day also stand to lose. So what should they do? Go for the more “valuable” checkpoints at the risk of not being able to reach them? Or choose a “safer” option and accept a penalty for being too timid? Each team will have to make choices.

Rally officials estimate that the “ideal” time to complete the 110km leg is 9.5 hours. Also there is a special aspect of the dunes days — teams are allowed to follow each other — but only in the dunes. Once they leave the erg at CP5, the regular rules apply again — “no following.”

As teams reach the edge of the sand sea, they find that Merzouga seems more hospitable than they imagined. Recent rain has made the sand more firm, making for an easier driving experience and many of the teams are racing easily through the daunting heights. By 9:30, most of the teams on Route X were already approaching the 4th checkpoint. The Gazelles on Route Y were also making good time, but those who had selected the “easy” route Z were having trouble.

Once out of the dunes, the Gazelles still have over 100 kilometres and 4 more checkpoints to find before reaching the new bivouac in Mech Irdane.

The first teams to complete all nine CPs on the course began arriving at the bivouac around 4pm. There was a buzz of excitement as teams revelled in the feeling that they had “conquered” the famed Merzouga dunes.

By 7:15pm 127 teams had reached the new bivouac, though some made the strategic decision to abandon the remaining checkpoints and return by the road — motivated no doubt by fatigue and a desire to get back early to rest up before tomorrow’s marathon leg. The atmosphere at the bivouac this evening is celebratory, ringing with laughter, exclamations, epic tales and sandy anecdotes. Today there were only five calls for mechanical assistance from teams stuck in the sand — Merzouga was merciful this year!

Gazelles TV presents the third leg of the competition — Through the dunes of Merzouga. [Sorry for the obligatory advertisement at the start of this clip, it comes as part of the embedded resource, not our site.]

M6 highlights from the third leg of the competition [Sorry for the obligatory advertisement at the start of this clip, it comes as part of the embedded resource, not our site.]

Team 171 USnomads hit all 9 of their checkpoints today on the “Y” Route, with a total “penalty” of 102.52 for the day (the value of the missed CPs plus the extra kilometers driven over the “ideal” course). The team ranked 10th among First-time Participants and 37th overall. 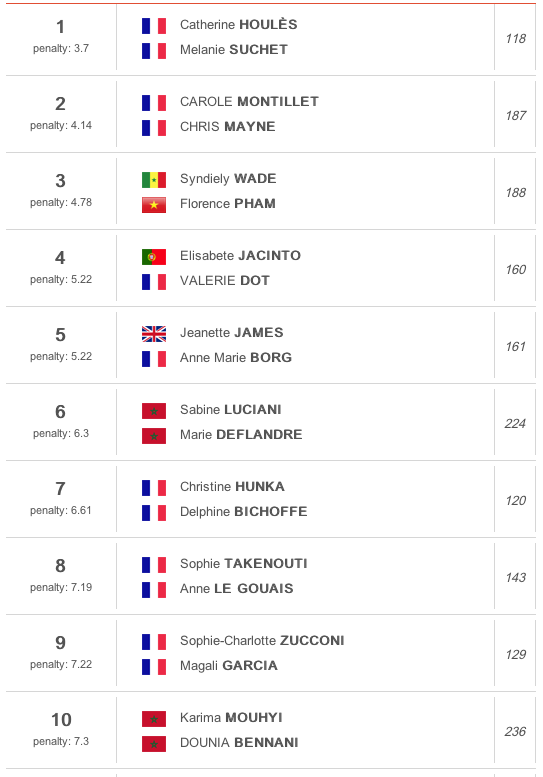 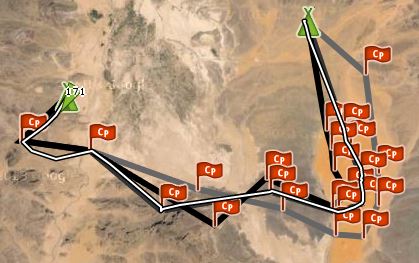 The team’s track (white line) compared to the “straight line” course for Leg 3 (click the image for a larger view). Current live tracking in realtime is available from the official Gazelle Rally site here. 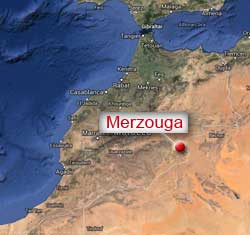 The reputation of the Merzouga dunes has been a source of discussion among the Gazelles since before their arrival in Morocco. Now, after skirting around the edges of the looming mountains of sand for the past three days, the Gazelles will finally face the challenge. The time has come to take on the ERG CHEBBI. Long anticipated with a mix of excitement and dread, there’s no turning back now. However, the teams have 3 different routes to choose from. The easiest, Route Z, meanders around the base of the dunes: a good choice for the less experienced or less daring (though Z is no joyride: while the slopes may be less steep and the hollows less deep, there is sand everywhere, and driving in sand remains a challenge). The middle option, Route Y, passes close to the highest sandy peaks. While the navigation is not particularly difficult, the terrain is more rugged and gets harder as the day progresses. Finally, for those who dare, Route X with veritable walls of sand: the Gazelles will need to circle around, take stock, coax their way over or through. Those coveted red flags, easily visible from the peaks at a distance of several hundred meters, will prove difficult to reach. Whichever route they choose, the Gazelles will return to the bivouac proud and exhilarated at having faced the tallest of Moroccos sand dunes. 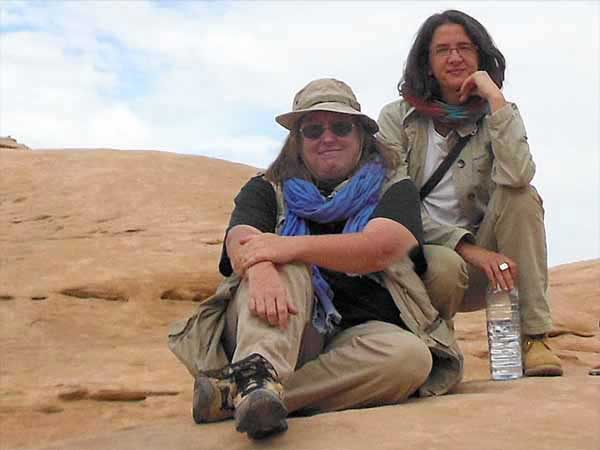 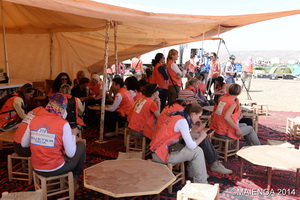 The moveable “tent city” the Gazelles call “home” each night is known as the “bivouac.” It has 600 inhabitants, a “mayor” (Rallye director Dominique Serra), essential services, a village square and even a clock tower (featuring the magnificent Saint Honoré “Gazelle” clock). Each morning the bivouac empties out to the sound of roaring engines and honking horns. Only the Rallye organizers remain behind, working diligently to keep the event running smoothly. The “biv” covers an area of 1000 square meters, with different areas roped off with flagging tape, the “dormitory” is where the girls set up their tents, there are showers and toilets on the outer edge, and the main square delineated by the medical tent, the website and video production trailers, the La Poste tent, the media tent, the mess tent and even a bar… 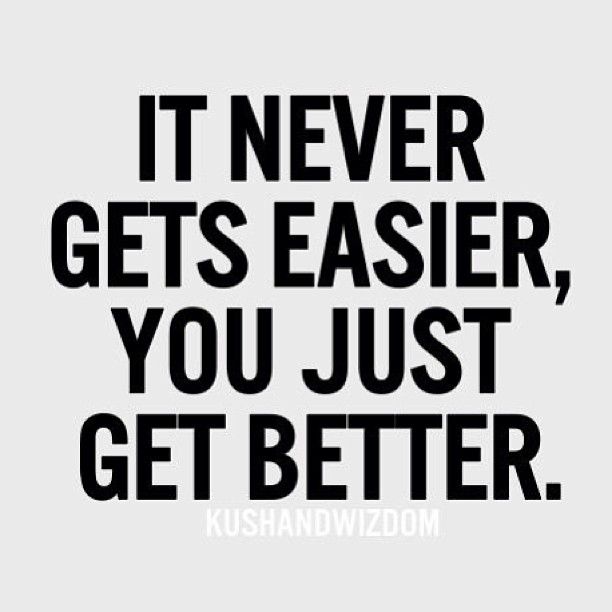 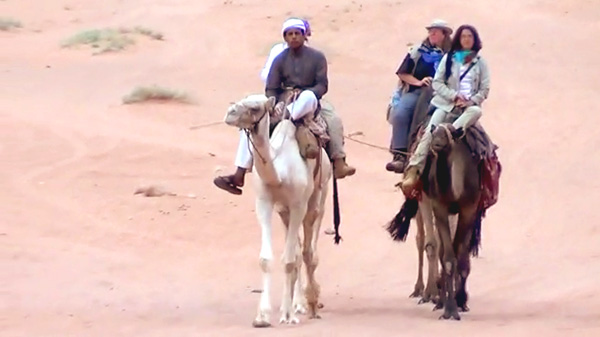 NAVIGATING THE DESERT THE BEDOUIN WAY

We started preparing for the Rallye Aicha des Gazelles last year, as soon as we made the decision to participate in the grueling nine-day off-road race across the Sahara… [read]

How do they determine the route for the Rally? An advance team from the organization went out on a recon trip in November to select and pre-run the course. Check out this account from one of the members of the recon team, talking about what they were looking for in the terrain and how they made their determinations: english | français 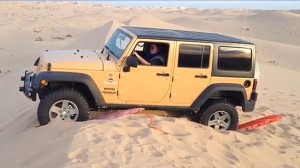 GETTING UNSTUCK: THE MAGIC MAXTRAX

No one wants to get “stuck” out in the desert, but we all know it is going to happen. Probably more often than we expect, too. During the rally we will need to be able to get ourselves “unstuck” without depending on someone else to give us a pull… [read] 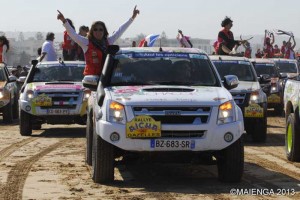