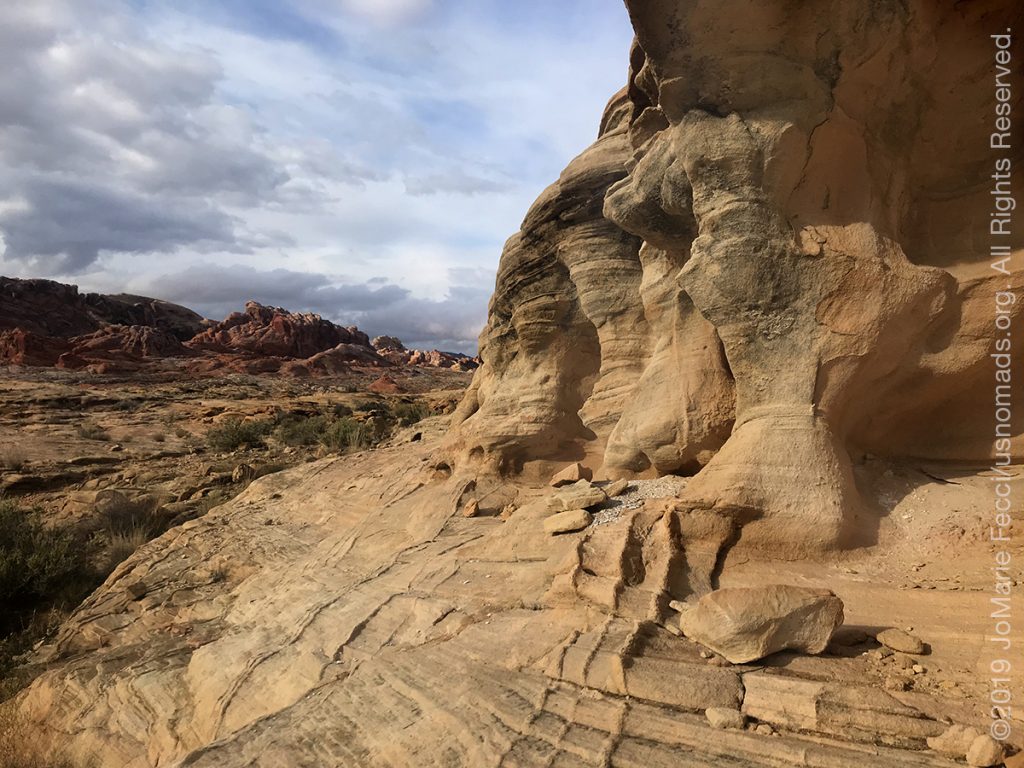 VALLEY OF FIRE, NV (25 December 2019) — It got very cold during the night, and the Mr. Buddy Heater ran out of “gas” halfway through, so when I woke up around first light and got out of my winter sleeping bag, I was “freezing.” As I exited my tent I noticed that someone had left their Christmas lights on at their campsite, and they were sparkling against the dark blue skies of first light.

I decided to get in the Jeep to get warm and look for a good spot to see the sunrise. I drove to the edge of the camp area to watch the sun come up, but because of the heavy cloud layer there was not a spectacular sunrise, and once the sun was “up” the sky was quite grey. The weather was still very unstable with menacing dark clouds. Luckily there was no precipitation and thanks to the heater in the Jeep and the suns first rays, I was feeling a bit warmer, and ready to get a headstart on my hike for the day. 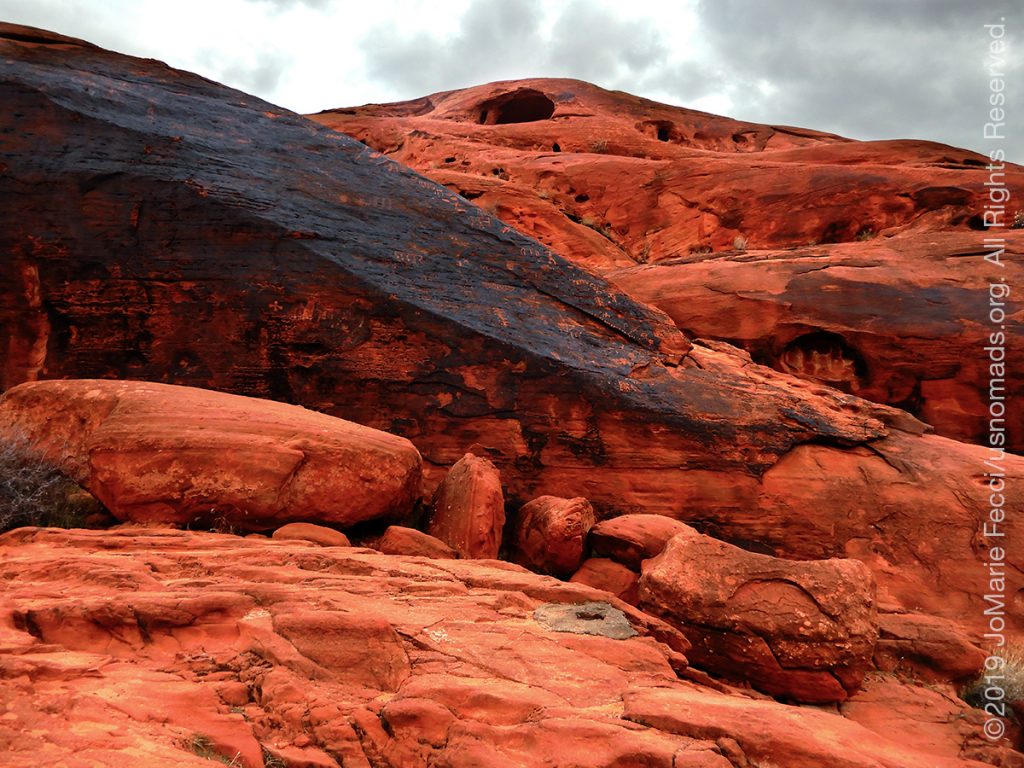 I drove slowly towards the scenic White Dome road to the trailhead for “Mouse’s Tank.” Though it is only a short easy hike, it is truly extraordinary because of the quantity of Petroglyphs on the surrounding rock walls. As I started down the trail I was “on the lookout” for rock art, scanning the walls around me for signs of man-made alterations to the red sandstone sculpted by nature. It was still quite early in the morning and I had the trail all to myself which made my quest feel a little more magical. I looked for areas of the black desert patina, a favorite canvas for the neolithic artists. It didn’t take long to spot the first grouping: four human-like figures seemingly holding hands along the edge of a rock overhang. 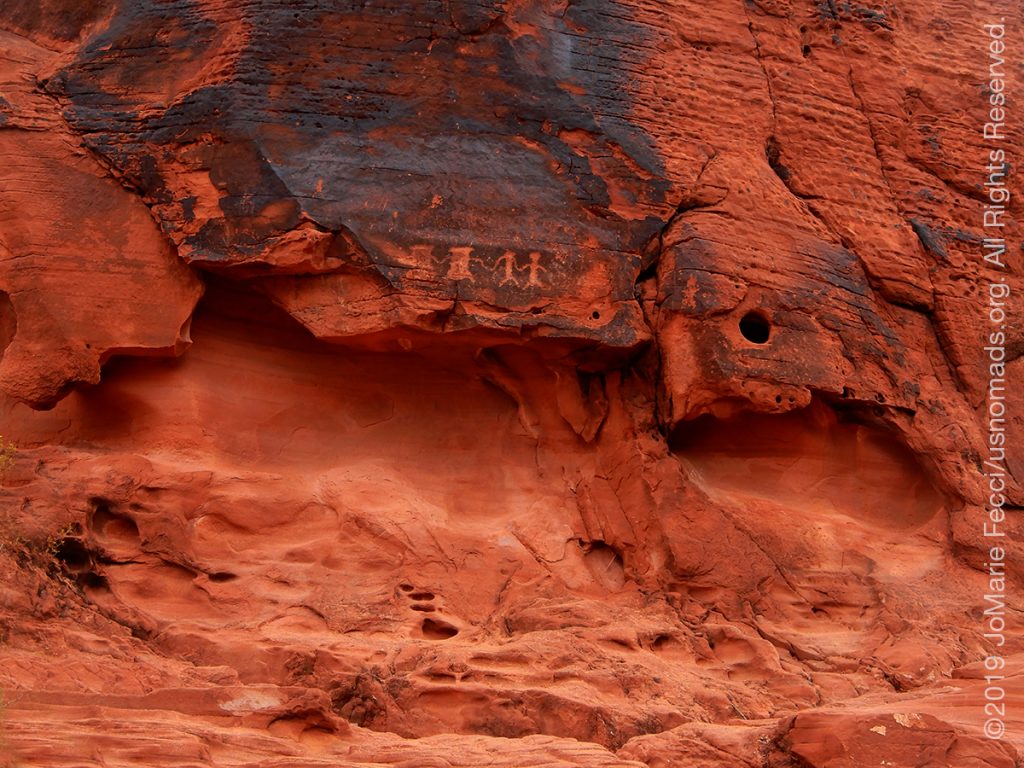 And just a little beyond, on a large smooth sloping rock face was the largest collection of symbols in one spot, like a giant story board that was impossible for us to read. It was covered with geometric symbols as well as more identifiable “figures” in an incomprehensible collage of history. I wondered whether it was a place of “ritual” or simply more of a “bulletin board” where people just added their own marks. Was it a visual language similar to Egyptian hieroglyphics or some kind of “code” that everyone in the area understood or maybe the symbols were like “brands” used to mark territories or a pictoral narrative of an important story. Though there are many theories among academics, no one living today knows the answer. The meanings and why exactly they were etched in stone here remains a mystery. I continued walking deeper into the canyon where the rock art was everywhere — it was as if I had stepped through a portal into the world of the ancient ones. 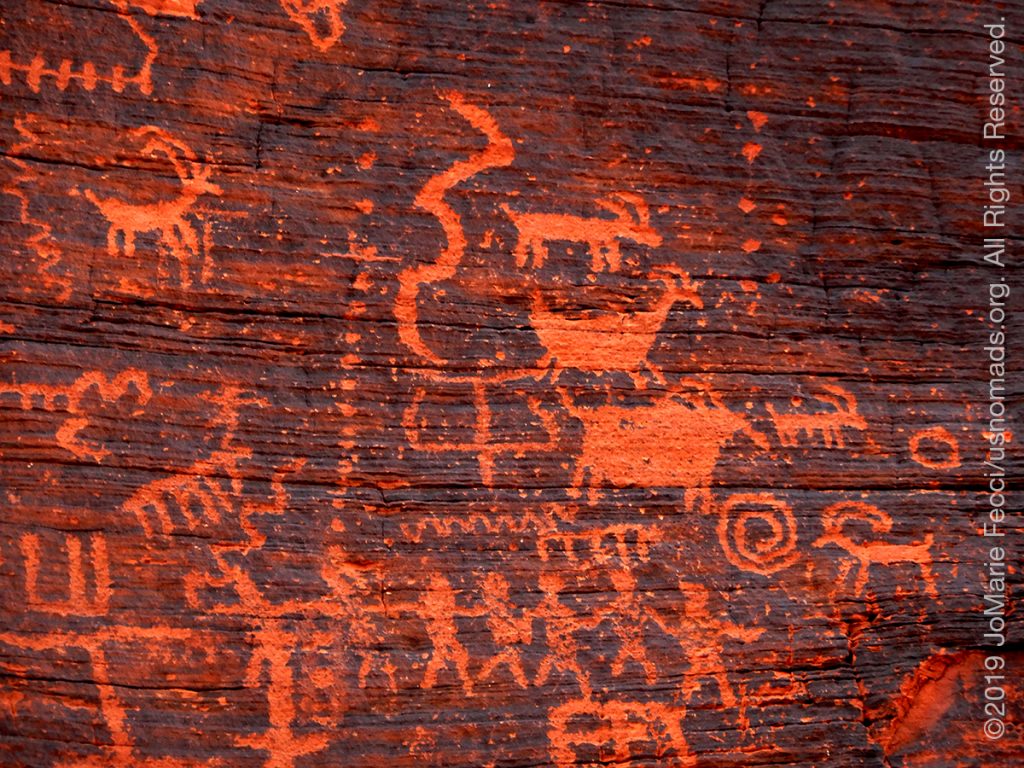 I wandered among their messages across time and wondered about the people who left them–were they shamans or hunters or wanders, like me, just passing through. It is generally accepted that many of the etchings were made over a period from 300 BC to 1150AD by the Ancestral Puebloans, or Anasazi, who were farming in the nearby Moapa Valley, and that their forays into the Valley of Fire probably involved hunting, food gathering, and religious ceremonies, although scarcity of water would have limited their stay.

After the Ancestral Puebloans, other indigenous peoples used the area and the Paiutes were here when the first Europeans arrived. The trail is named for a southern Paiute known as “Little Mouse” who had been called “Mouse” by his tribe because of his shyness and ability to hide. According the the available information Mouse was “wanted” by the law in the 1890’s for the suspected murders of two prospectors and hid out in this area for several years evading capture, surviving on the water in the “tank”-–which is a small water pool hidden between the rocks at one edge of the canyon. Little Mouse was eventually surrounded and killed by a posse several miles away near the Muddy river. And there is not much more information about the story. But the “tank” is still there and was full of water when I came to it.

In fact, much of the geology of surrounding Mouse’s Tank was formed by water, and the sandy trail is actually the bed of an ancient stream. 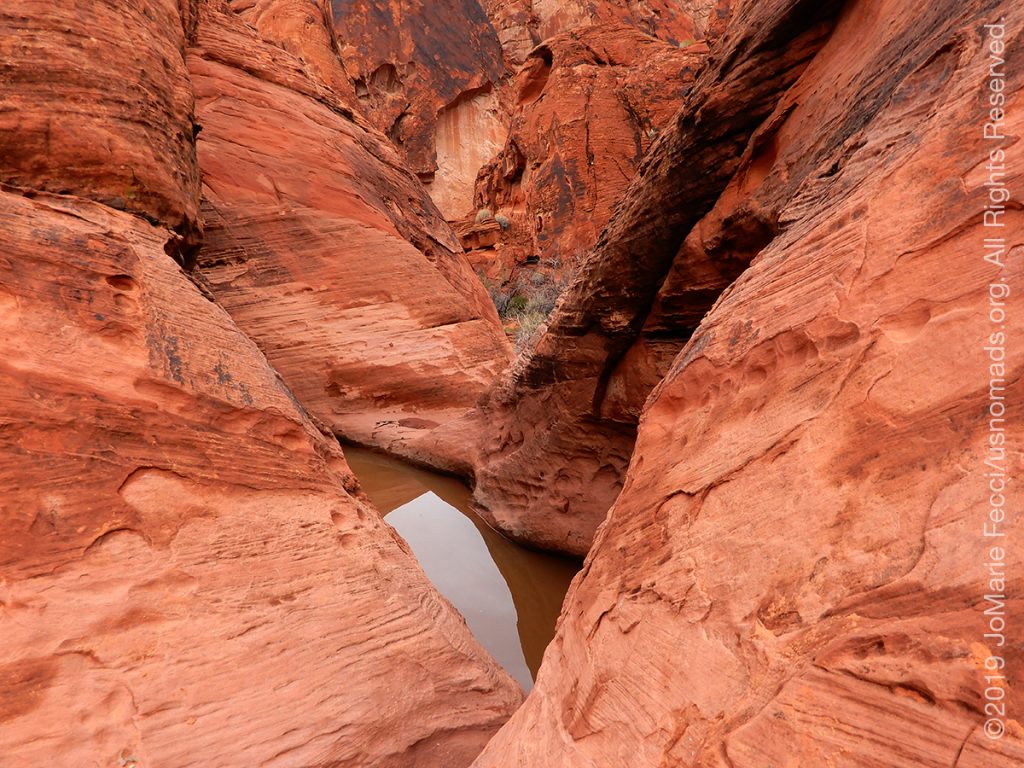 After leaving Mouse’s Tank very happy with my walk, as I drove around a corner I spotted two Big Horn Sheep on the side of the road grazing on bushes among the red rocks. I couldn’t believe my amazing luck, to see these animals TWICE in two days. I stopped the Jeep a little bit away from the sheep and first took some photos from the window, then slowly got out of the Jeep and took up a better photography position as the sheep continued to graze warily among the rocks. 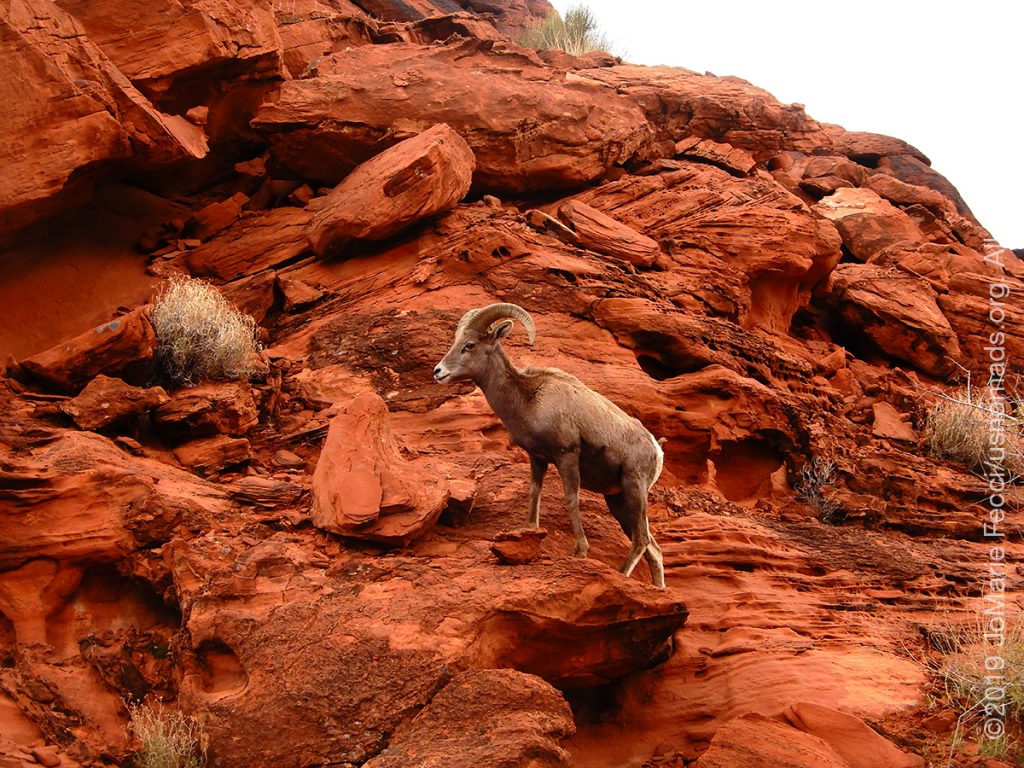 I left the sheep just as the first cars of day-tourists began arriving. I was really surprised by how many tourists were coming here in such bad weather, and on Christmas Day, no less. By afternoon all the marked trails were full of tourists and cars were parked everywhere along the White Dome Road. To avoid the crowds I decided to just go off on my own for a walk in the desert and explore the landscape. Unlike in some parks where you must stay on the trails to protect fragile “crust”, in Valley of Fire you are permitted to walk “off” marked trails in the open desert area which was beautiful and desolate at the same time. I found my solitude without actually having to go very far away from the crowds. It’s interesting how people flock to the same locations where all the other people are rather than just looking and exploring the wondrous beauty all around them. I am very glad that I am beginning to understand the desert and learning to really see for myself. 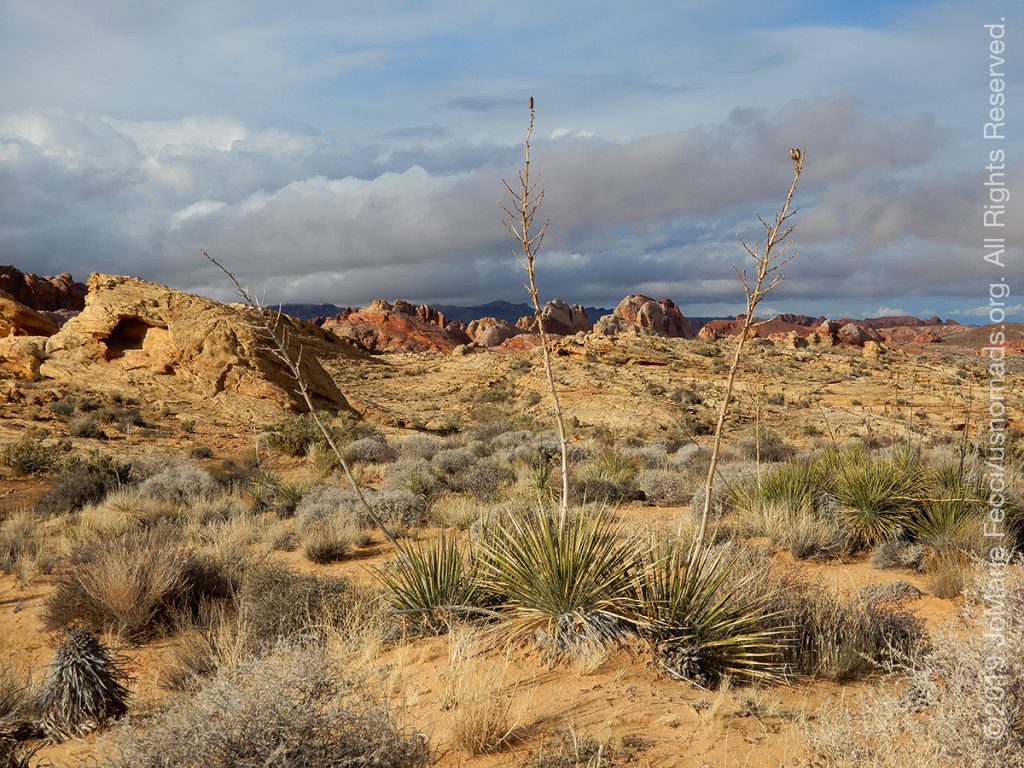 After a day of exploring I returned to my campsite and settled back in for the night. I used the last bit of daylight to get everything prepped for my Christmas dinner and get the fire nice and warm before the chill of darkness set in. As the sky turned from deep blue to black I saw the Christmas star (which I know is probably a planet, but on this day I will still say it is the Christmas star) appear low in the sky. The first star of the evening. 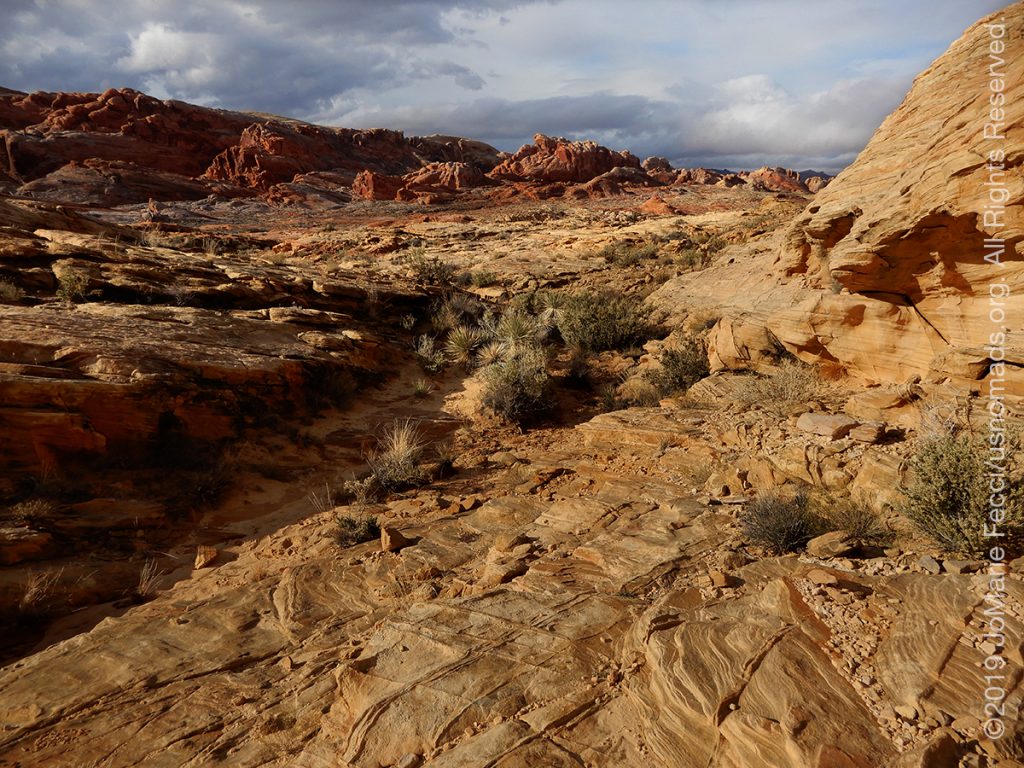 With darkness came more stars and colder temperatures, so I added a few more logs to the fire and marveled at how fortunate I was to be spending Christmas under the stars framed by the dark borders of the rock formations surrounding camp. 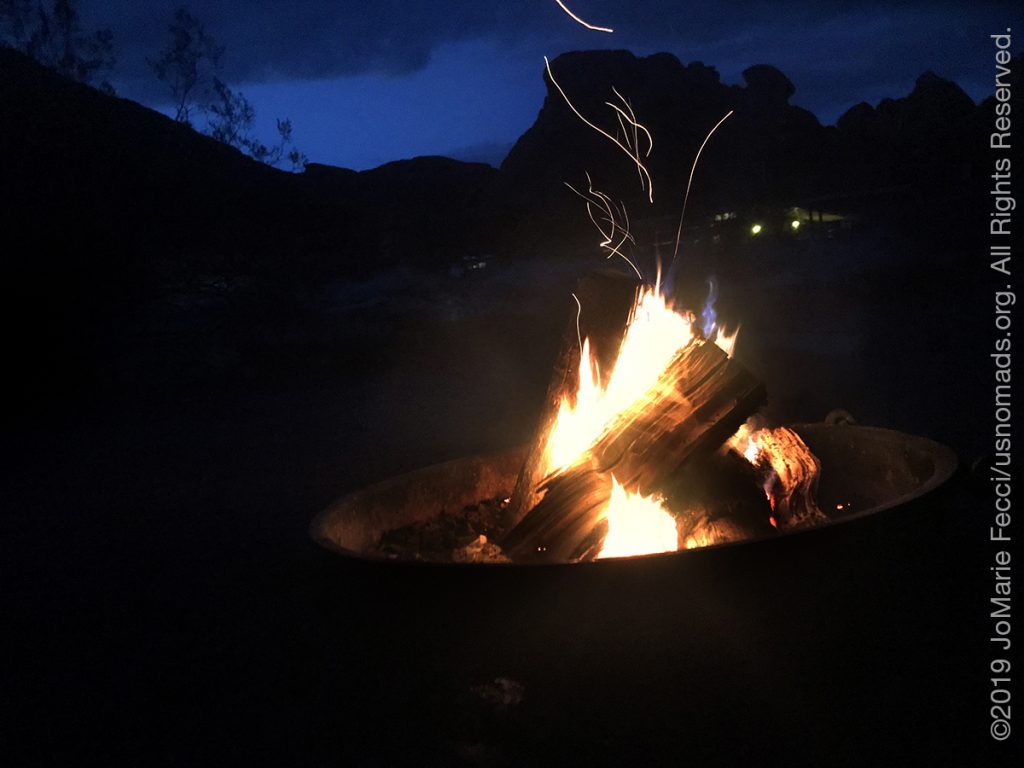