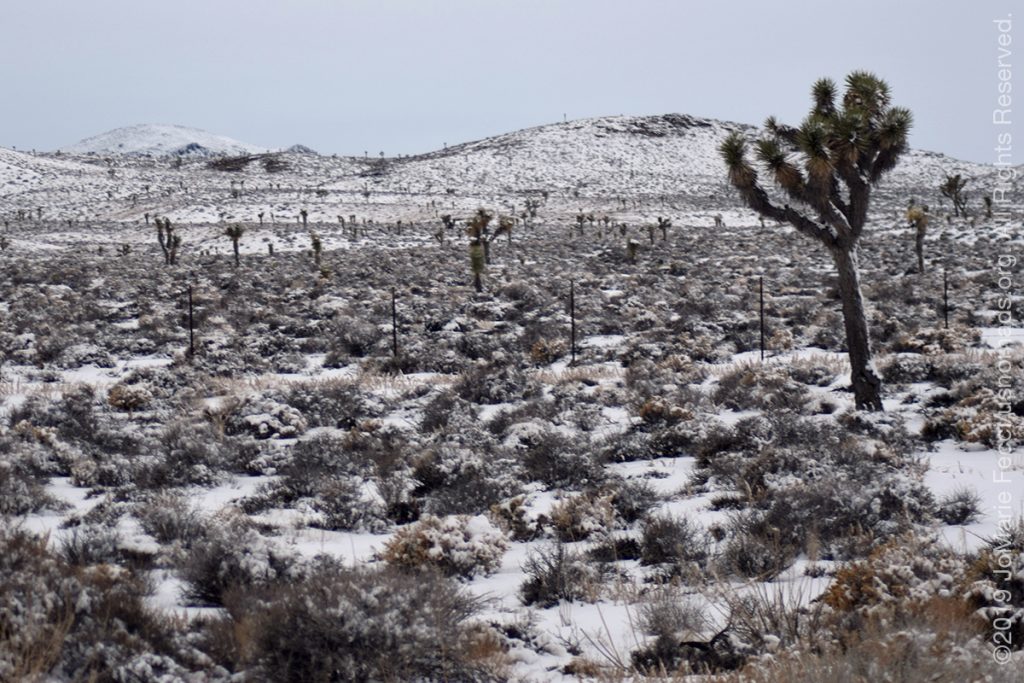 TONOPAH, NV (26 December 2019) — Another chilly night in the Valley of Fire, and an early wakeup in time to catch the sunrise. I took the time to watch the ageless transition from night to day in this magical landscape. The skies were pretty spectacular as the sun came up from behind the rocks just below a layer of clouds that seemed to truly form a “ceiling.” But the coming of daylight didn’t warm things up much. That heavy low cloud layer that had made the morning color so interesting now obscured the sun completely and the Jeep’s map screen kept lighting up with weather warnings for another big storm headed this way. The warnings covered the whole southwest all the way from Los Angeles to the Las Vegas area and specified the likelihood of snow in this region. I needed to make a decision. 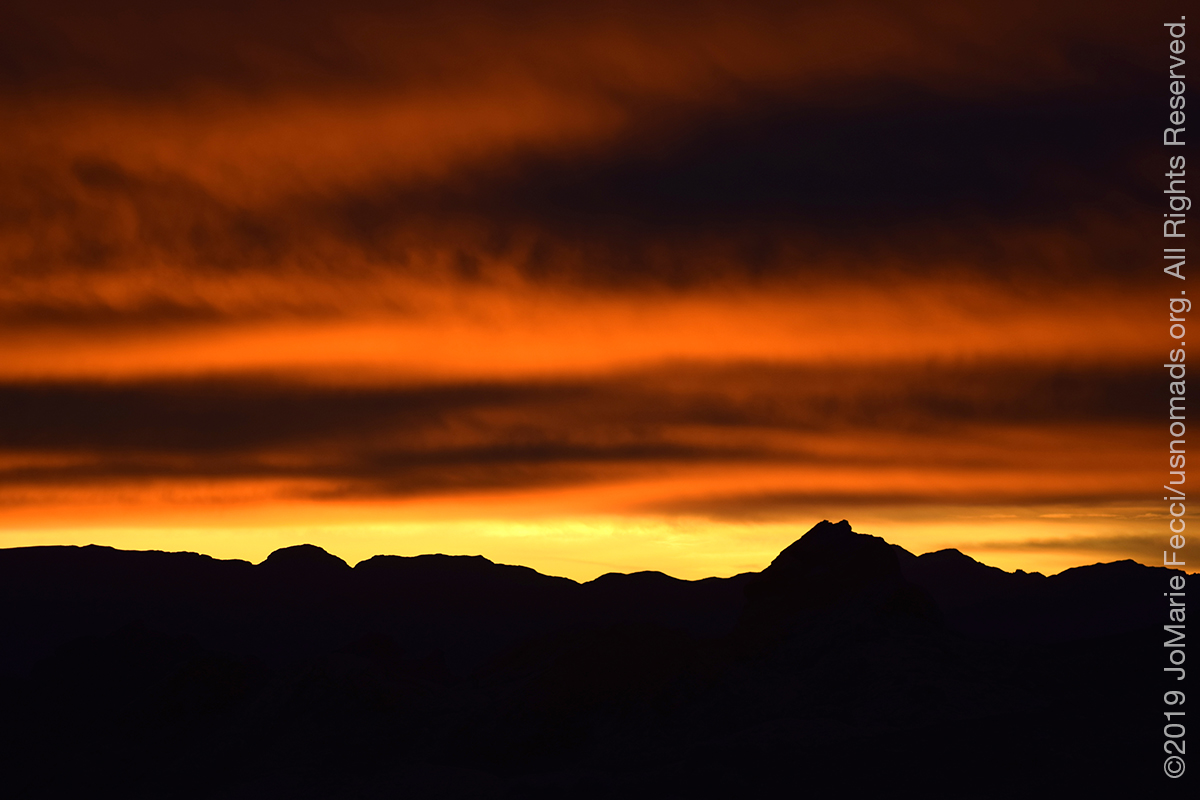 I went for a walk along the Fire Wave trail while I mulled over the options in my head. The Fire Wave is one of the most popular trails in Valley of Fire and it is a lovely walk that starts across sandy desert terrain, then passes around a big wall of red rock to reach the “waves” of pink and white sandstone. The trail was empty but less stunning than usual because of the loss of the sun. Everything looked flat and the colors were dull. It was cold without the sun too.

As I ended my walk looping back towards the Jeep, I had a plan. I would stop at the Visitor Center and ask a park Ranger about the forecast and based on the response regarding the likelihood of snow and freezing temperatures I would decide whether to stay or go. I really didn’t want to leave the Valley of Fire yet, but I am tent camping and even though I have the Mr. Buddy heater, below freezing temperatures and major precipitation could turn “uncomfortable” into “dangerous”. 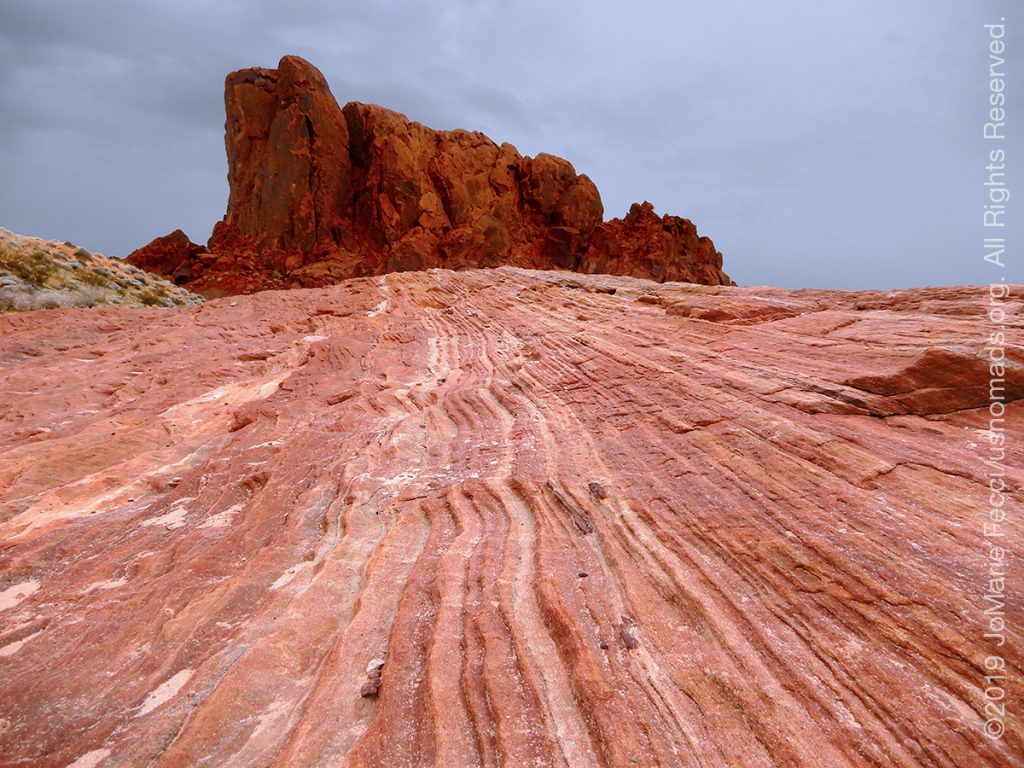 The ranger confirmed the likelihood of snow in the park, though he said it would probably only be “a little”. I thought to myself how it has already been raining “a little” every day and it is already damp and cold for tent camping. I wasn’t ready to risk freezing out here. With the storm hitting the entire southwest, I started looking for a hotel reservation. I wanted to stay in the small town of Beatty NV, which is right near the entrance into Death Valley, the next stop on my route. But everything in Beatty was full. I had to look further. I finally found a hotel room available in the town of Tonopah NV, about an hour-and-a-half’s drive further north from Beatty on Hwy 95.

I broke down camp quickly and looked at route options, deciding on the northern route that skirted furthest around Las Vegas because I really did not want to break the wilderness spirit of my trip by returning through the city. 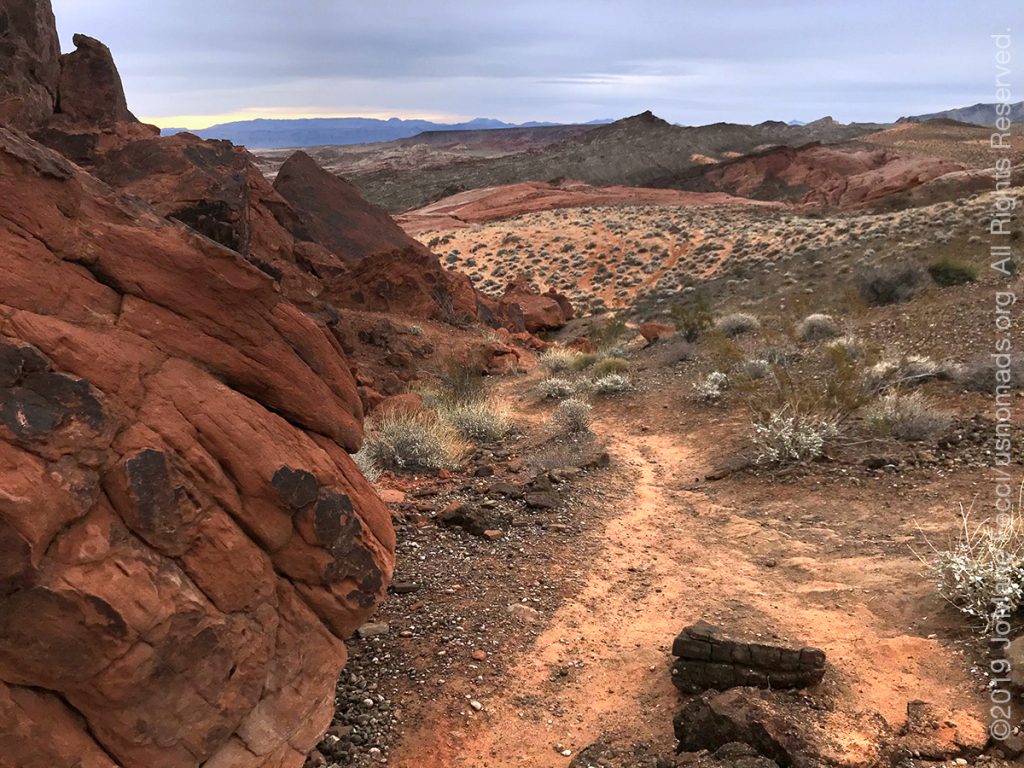 The rain started falling shortly after I left the Valley of fire, and as I turned north onto Hwy 95 it began to mix with light slushy snow that melted as soon as it reached the ground. When I reached Beatty it was just drizzling a little bit. I stopped for a quick lunch of chili and beer at the Happy Burro where the locals were talking about the passages into Death Valley all being closed due to the storm. They said that the roads were closed to vehicles that did not have 4WD and tire chains. I must say that I honestly never imagined road closures for SNOW — IN THE DESERT. I wondered if the people were exaggerating, or if there really was something to worry about heading further north from here. And I hoped that the roads into Death Valley would be open again tomorrow! 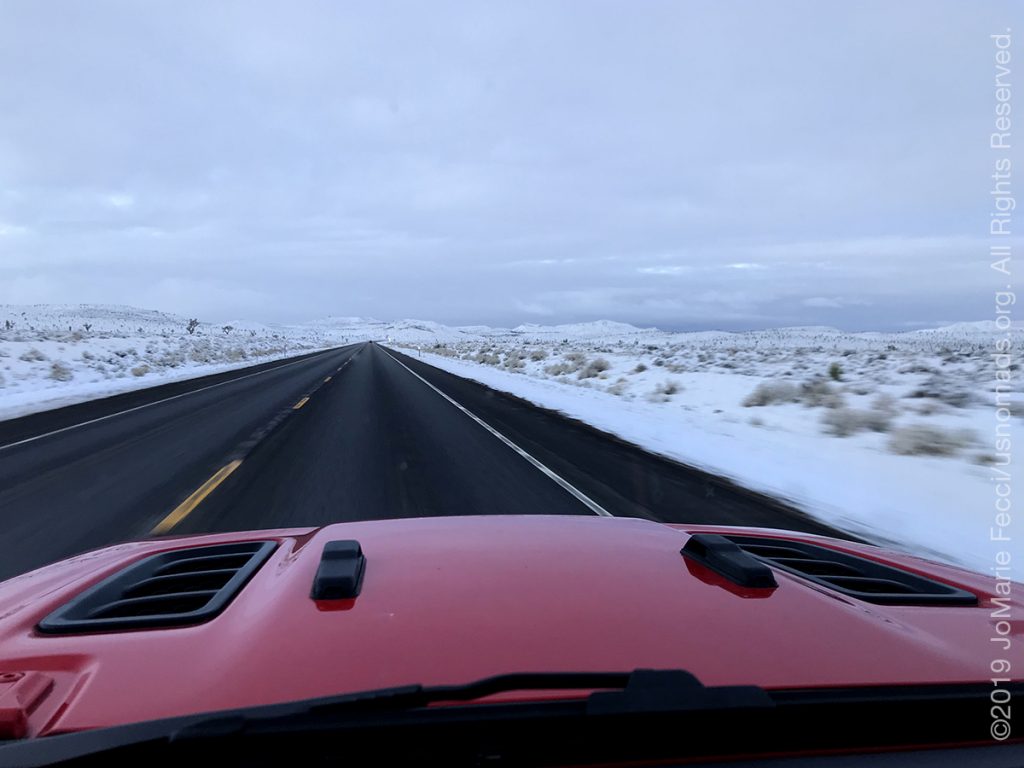 I filled up with gas before leaving Beatty and continued northbound on Hwy 95 and soon enough I began to see the snow. It was definitely sticking, and the desert was blanketed in white. The whole situation seemed surreal and I drove on in awe of the treacherous beauty surrounding me. It began coming down heavier and I needed to drive very carefully, even with such a great Jeep, because the roads were snowed over in some spots and icy in others. 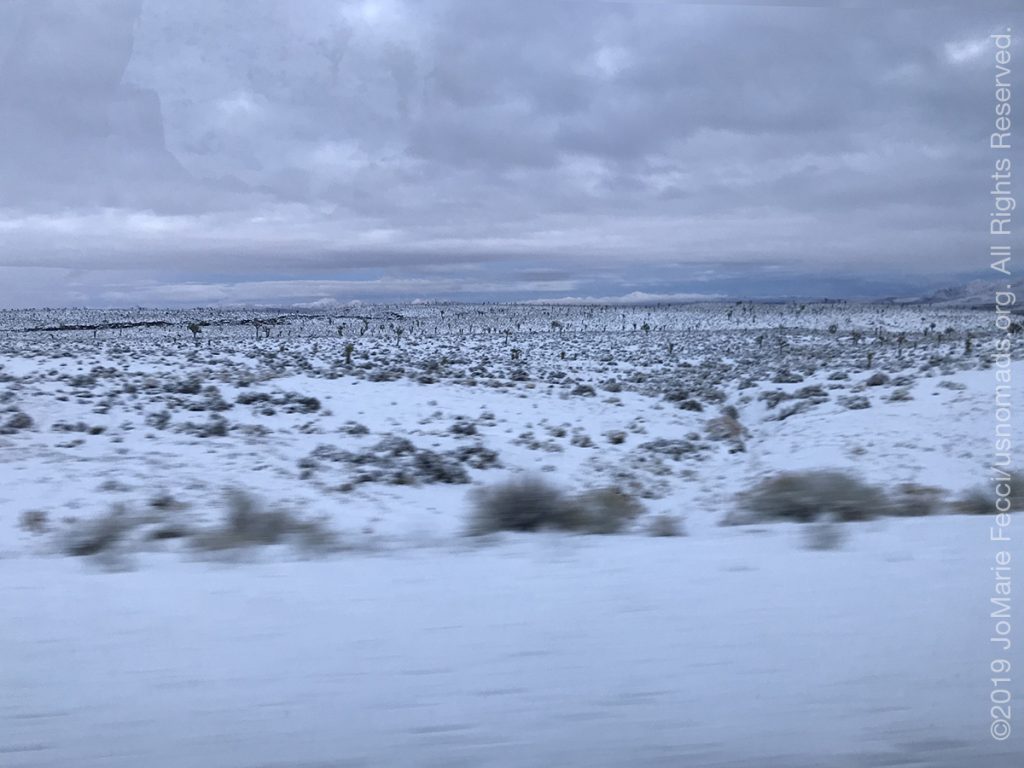 While I really wanted to keep stopping for photos, I had a sense that it was more urgent to keep moving, in case it got worse, in case they might close the road if it got a lot worse. I had no idea what to expect. I had never driven this particular stretch of the road before. And yet I couldn’t help but marvel at the ephemeral beauty of the snow on the desert. The distant mountains looked like the Swiss Alps and the Joshua trees were frosted. It was incredible to be seeing and experiencing this moment. 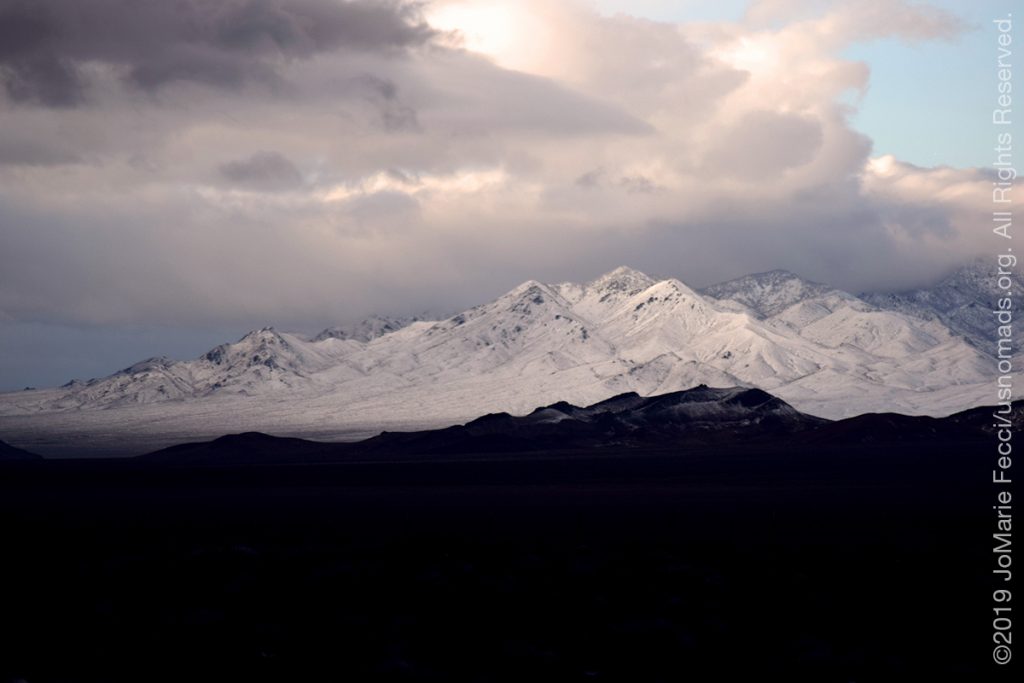 Approaching the town of Goldfield I was driving between some rather large mountains and the snow was not letting up. I tried to focus on the road and just driving. This whole segment of the drive was taking me much longer than it should have because I had to go much slower (and of course the photostops played into it too) and now I was quickly losing daylight. I feared that the roads would become even worse after dark when dropping temperatures would freeze whatever the traffic had melted leaving a deadly sheet of ice across the tarmac. 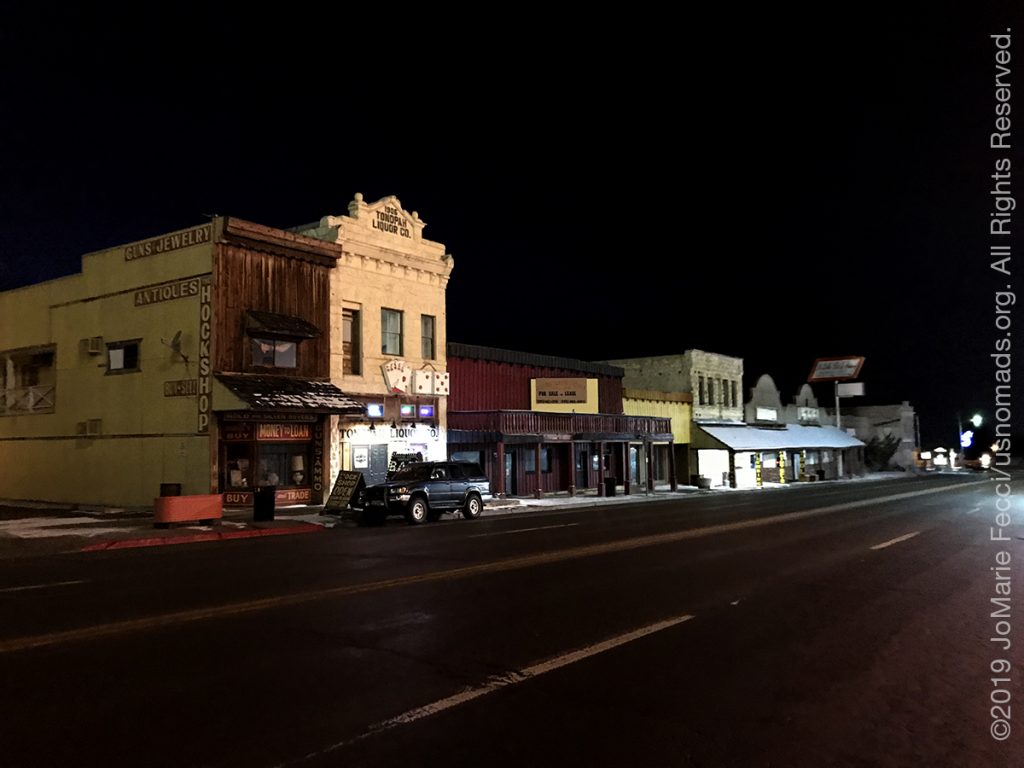 It was well after dark when I finally rolled in to Tonopah feeling relieved that I had made it safely. The intense concentration during the last leg of the drive had fatigued me mentally and I was tired. The town had the look of a western movie set, and I found out my hotel for the night, the Mizpah, was a historic landmark. It was also famous for being supposedly haunted. 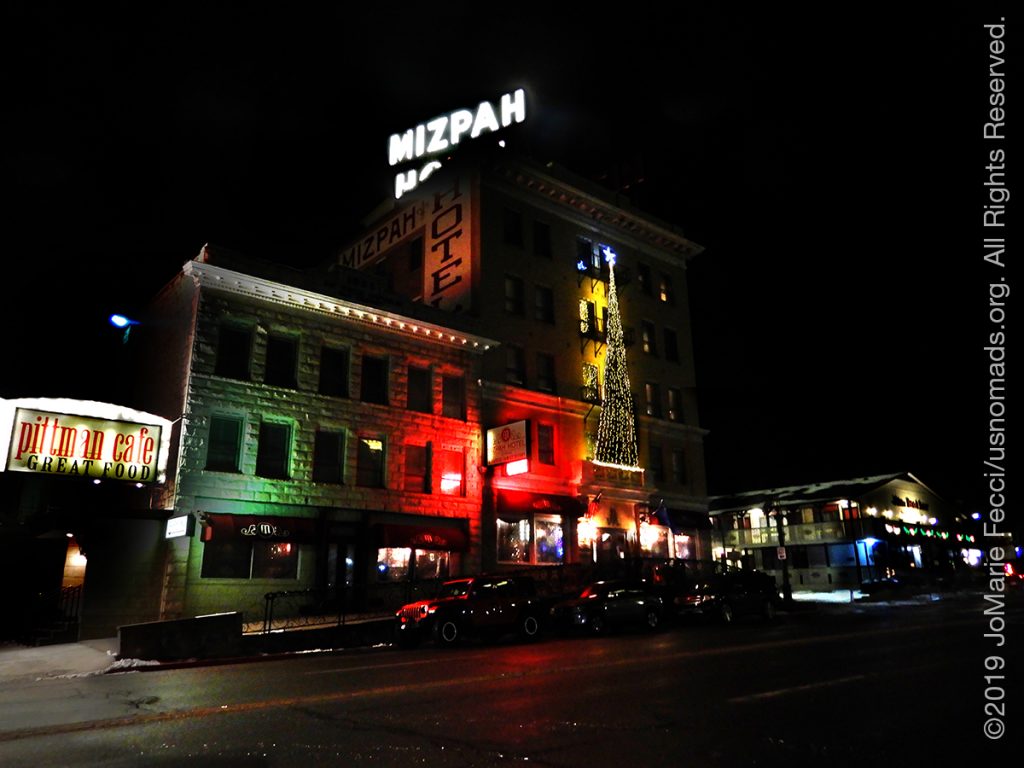 The surreal day was just continuing, and I felt like I was in an episode of The Twilight Zone as I came out of the snow and into a well-preserved period-style hotel. Originally opened in 1907, the Mizpah Hotel had once been a luxury accommodation and a social hub for a booming mining town. Now it is more of a quirky “old-west” destination especially interesting to those looking for “ghosts.” The resident phantom is known as “The Lady in Red,” and she came to the Mizpah at some point in the 1920s, working as a “lady of the evening” from the fifth floor of the hotel. She was allegedly murdered by a jealous lover, and her spirit is said to still roam the halls, making her presence known through the sound of footsteps, shaking chandeliers and the unexplained appearance of pearls throughout the hotel. 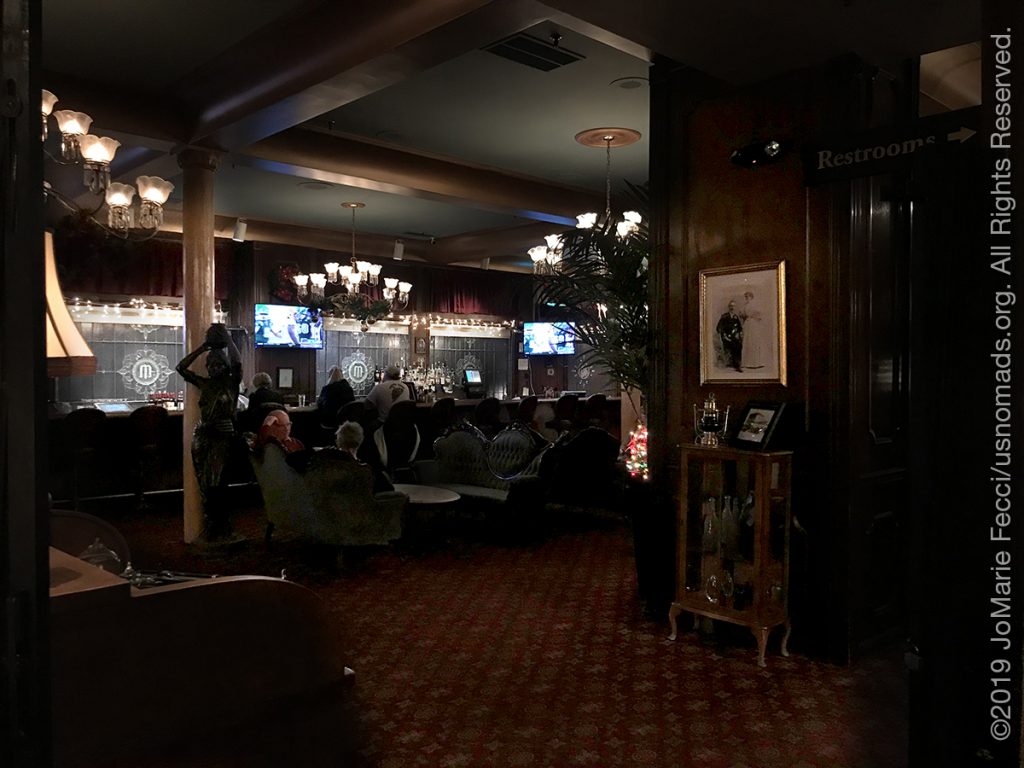 As I headed up to my room I saw no evidence of the ghost, but the place did have a strange ambiance about it. The few guests lingering in the lobby lounge seemed as if they could have been part of the decor, and it was at times hard to tell if people were “dressed up” for the period theme or if that is just the way they actually dressed.

After settling in to my room, I went down to get dinner in the hotel’s restaurant, which was quite good, then made a stop in the bar of hotel casino for a drink and an excuse to check it out. 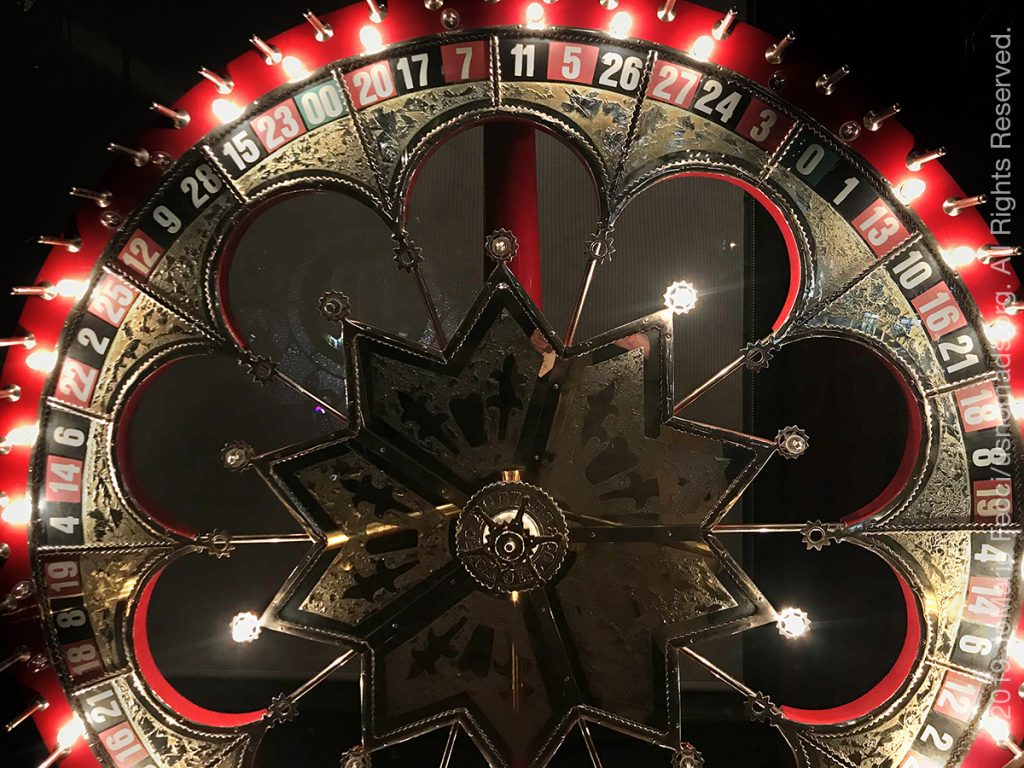