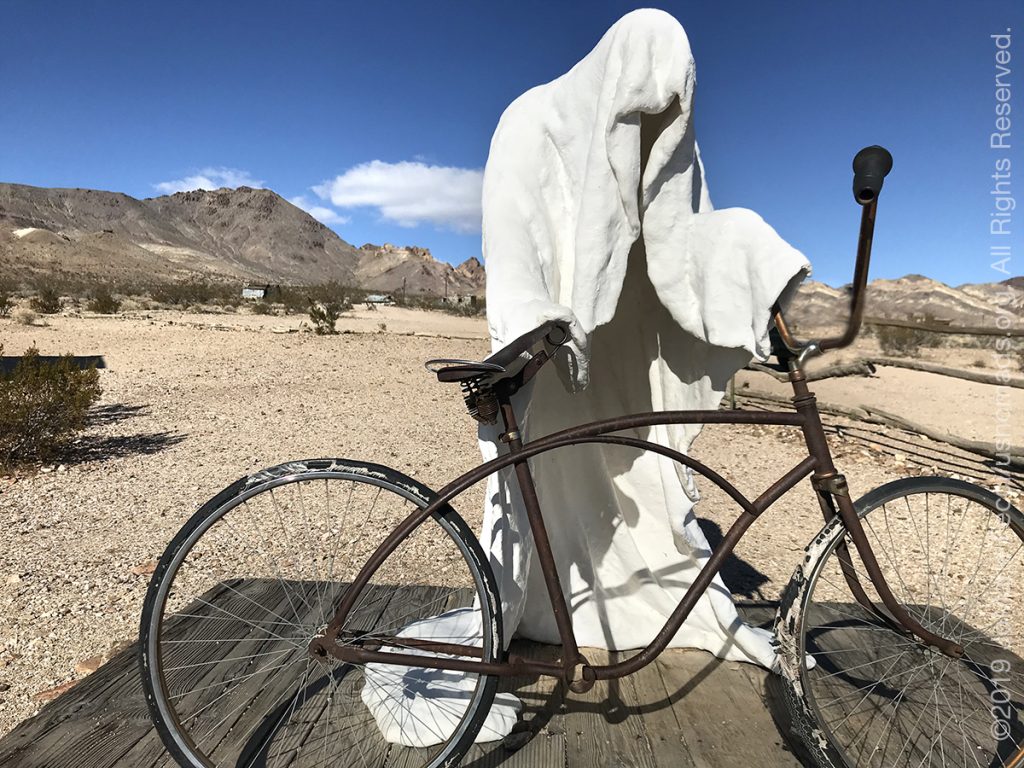 DEATH VALLEY, NV (27 December 2019) — After yesterday’s storm the skies had completely cleared and looking outside from my hotel this morning, it looked like a nice day. The sun was out shining bright as if nothing had happened. Maybe the snow on the Joshua trees had just been a crazy dream. But as soon as I stepped out I felt the freezing wind on my face again and knew it was winter. Too cold for a leisurely walk down Tonopah’s main street, I bundled myself and my bags back into the Jeep and headed south, back towards Beatty and Death Valley beyond. 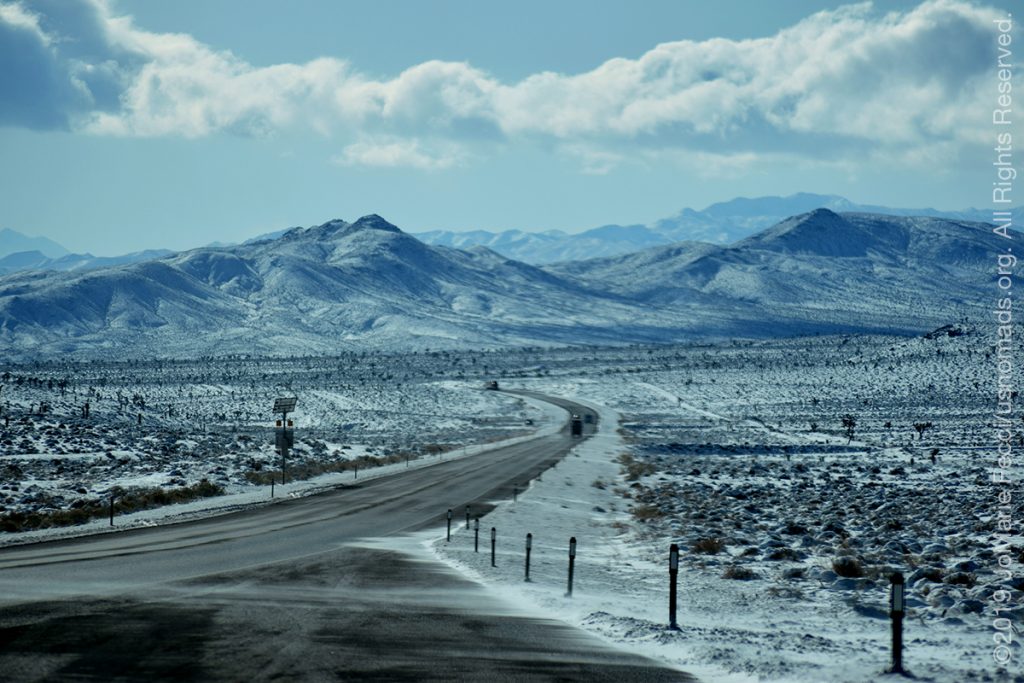 I made one stop to buy some firewood, knowing I would not “find” any in Death Valley, then drove straight out of town. As I exited Tonopah I reentered the surreal winter landscape. Snow in the desert. It was real. I couldn’t help but stop to make some more photos of it, but interestingly enough today’s bright sunlight transformed the feeling of the imagery completely. It was no longer mysterious or slightly menacing as it had seemed yesterday with the dark clouds and blowing winds. Today it was just snow. 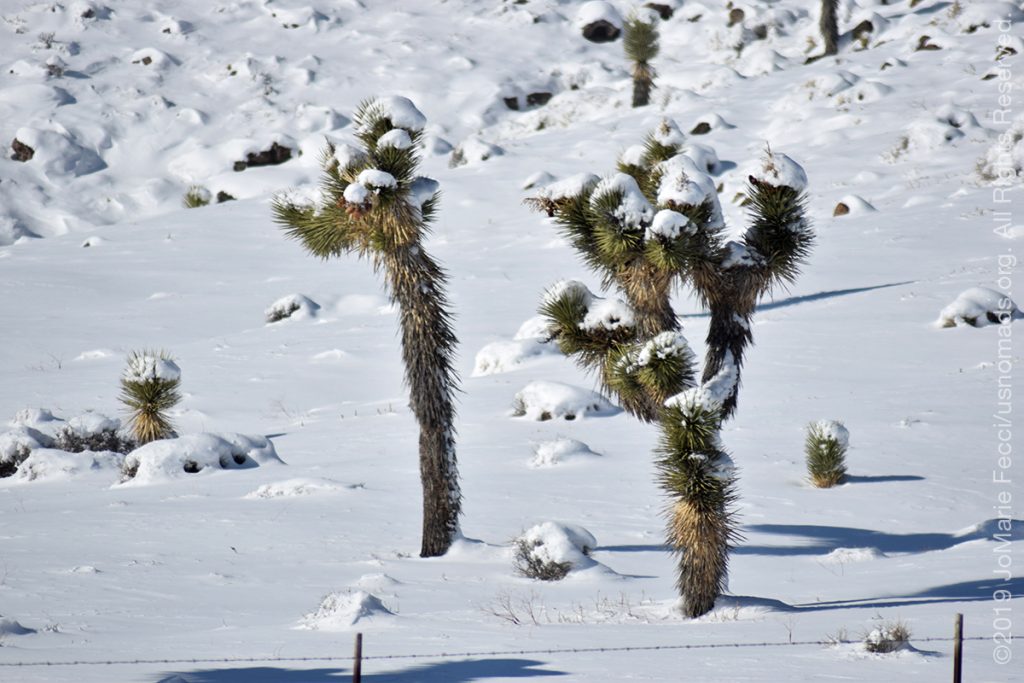 As I drove along Hwy 95 with the sun glistening on the snow, it seemed like it gradually melted away. Or maybe the elevation had just gotten lower. In any case, by the time I reached the outskirts of Beatty it seems like the snow was gone. I made a quick stop to check out the plane wreckage outside of Angel’s Ladies, an old Brothel that closed in 2014. The wrecked twin Beech D-18 has been sitting near the brothel’s entrance since a failed promotional stunt involving jumping from the plane onto a mattress to win a free night with one of the ladies. The plane crashed here not far from the brothel’s road sign and has become something of a landmark. 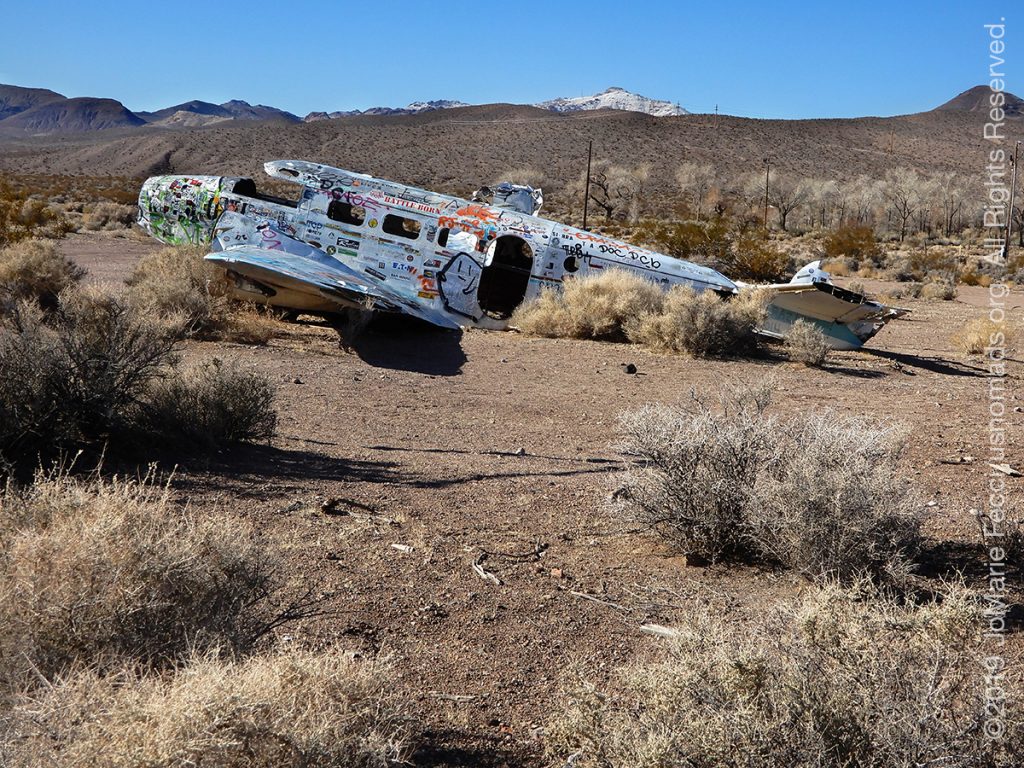 From the crash site, I continued to Beatty for a quick lunch and then on to the site of the Rhyolite ghost town. Rhyolite is a preserved and restored ghost town that is not technically within the borders of the Death Valley national park, but just outside its edge. The town had been founded in 1904 and only lasted a little over ten years, becoming a “ghost” by 1916. It is a great example of the short lived boom-towns that grew up all over the area during the late Gold Rush era. The site is administered by the NPS, and is more like a museum than the kind of “real” ghost town that you could stumble upon while exploring in the desert, but it is still really cool, and I always like to stop here to wander a bit. 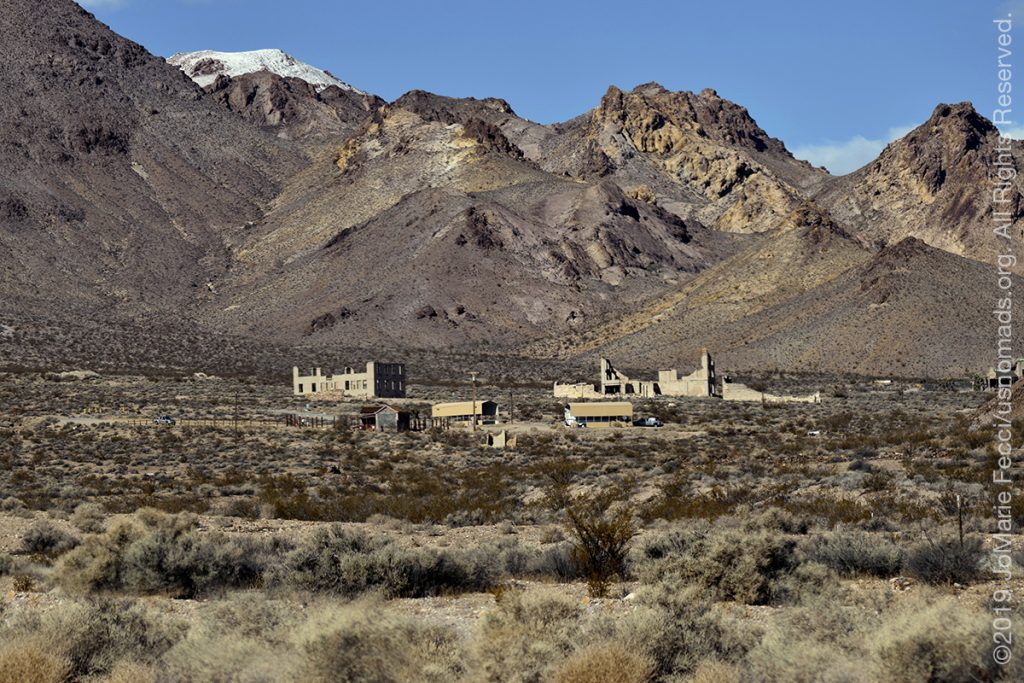 This time I was also really interested in going to the Goldwell Open Air Museum, which sits just before the entryway to Rhyolite, to see and photograph the “ghost sculptures.” The “ghosts” are the work of Albert Szukalski, a Polish-Belgian artist who created the sculptures in 1984 by draping plaster-soaked burlap over live models until the plaster dried enough to stand on its own. Called “The Last Supper” it consists of ghostly life-sized forms arranged in the same fashion as in Leonardo da Vinci’s “Last Supper” painting. But for me this sculpture really represents the “ghosts” of the old mining town. 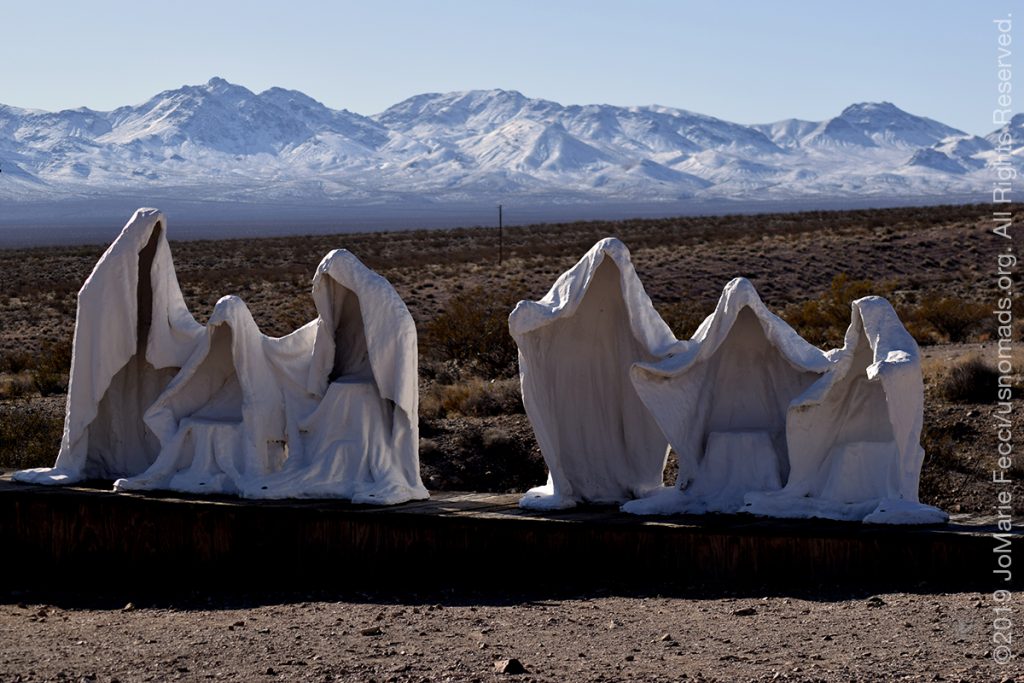 The sculptures sit alone in the middle of the desert not far from some old tumbled down shacks that seem to be outside the purview and protection of the National Park administrators. A few rusted old car hulls sit between the brush and telephone poles with wires flapping in the breeze still stand among the shacks. Not far away is my favorite of the ghost sculptures — “Ghost Rider,” one solitary figure with an old bicycle set against the background of shacks and the mountains beyond.

To me these ghosts represent the spirits of all those people who were drawn to the desert on the edge of Death Valley by the promise of gold — adventurers full of hopes and dreams. I feel drawn to their stories, which is maybe why I always feel a need to stop here. 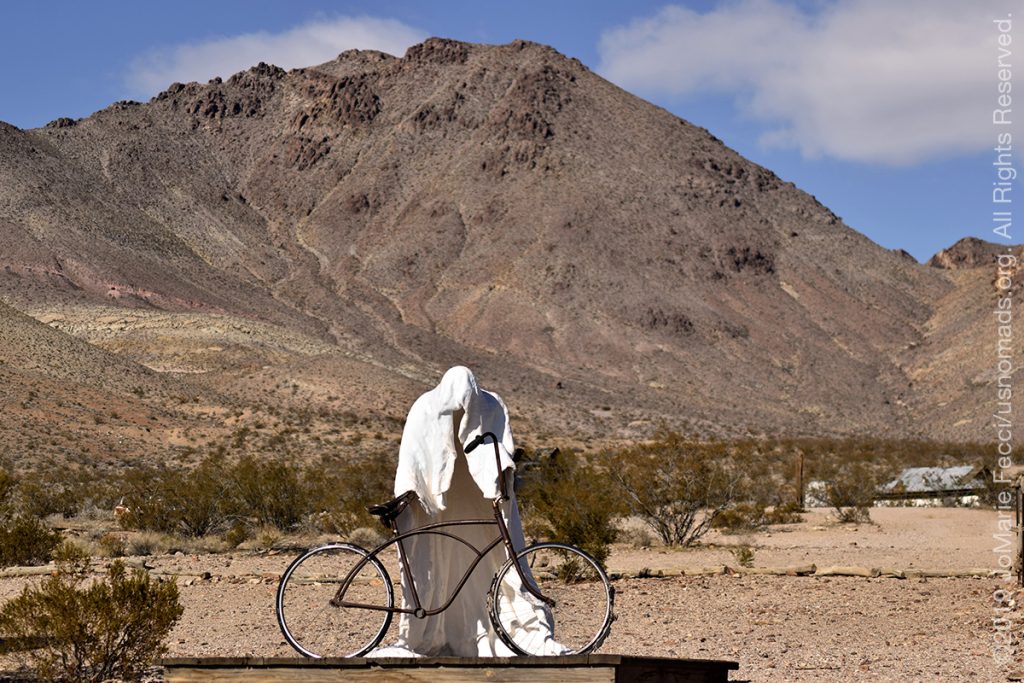 After my short wander among the ruins I continued down toward the Valley. I had originally planned to camp at Mesquite Springs but because of the recent cold temperatures I changed my mind and decided to go to Texas Springs campground instead. Texas Springs is at the lowest elevation in the park and after yesterday I didn’t want to take any chances on the weather. Before making the final descent, there is an overlook with an amazing view across the valley to the mountains on the other side. From up here it looks like the desert is an ocean, and I guess at one time it was. According to current geological consensus, during the middle of the Pleistocene era (10,000–12,000 years ago) there was an inland lake here that was roughly 100 miles long and 600 feet deep. Eventually the water evaporated and the area turned to desert.[12] 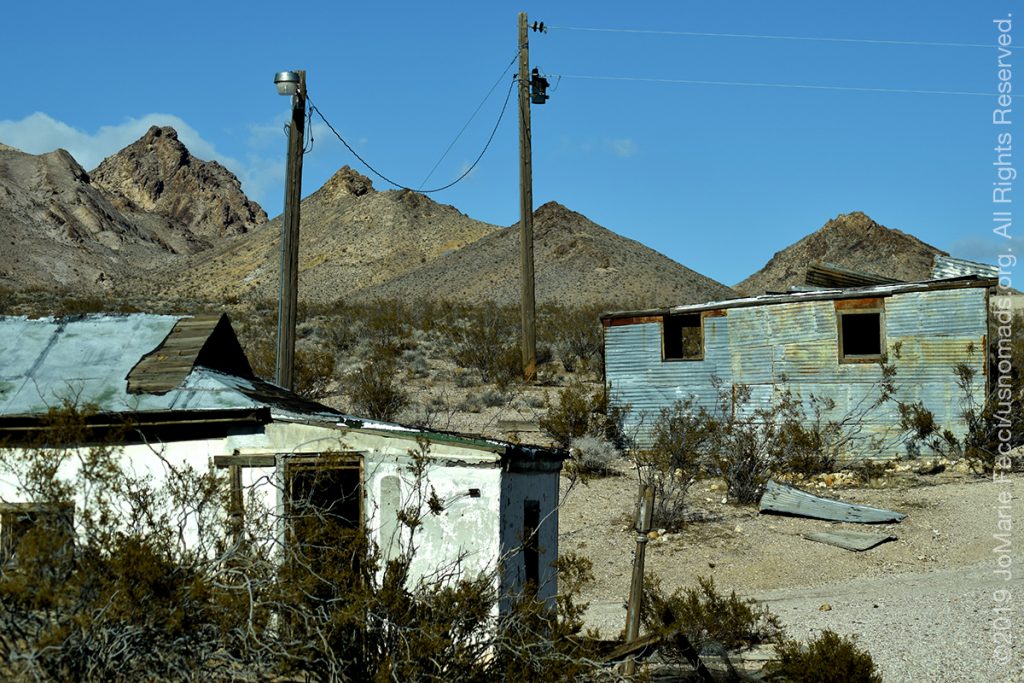 As I reached the floor of the valley the temperature was 64 degrees — I had finally escaped winter. Sort of. There was still a fierce wind and it made a challenge of even getting the tent up. Eventually I got it set, though I did tear a bit of the fabric when it got caught on a sharp broken branch of the sole tree that gave any shade to my campsite. Nevermind. I was here and happy to be able to have another night out under the stars. 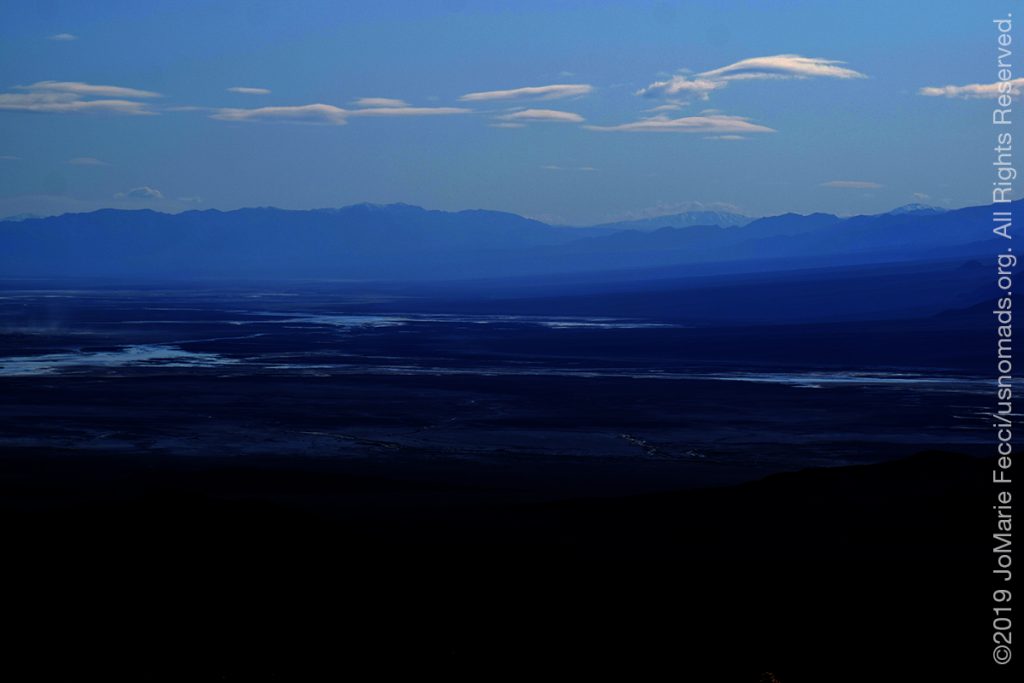