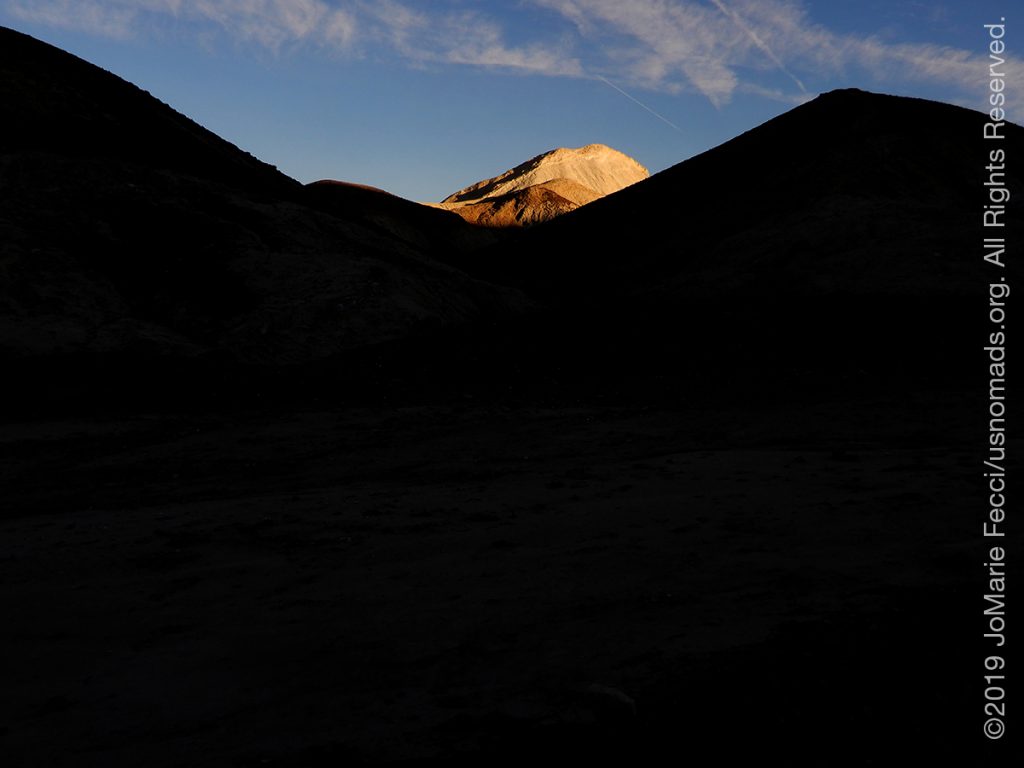 DEATH VALLEY, NV (28 December 2019) — The night had not been too cold and I woke up full of energy and excitement for the day ahead. I had heard the coyotes’ song last night. Their howling sounded close and I thought maybe I would see one today. Once before I saw coyotes in Death Valley–in fact it was the only time I have ever seen them close enough and long enough to make a few photos. Every other time I have ever seen one it was too far away or running across the road and disappearing into the brush. I thought it might be a good plan to look for them today. Death Valley is huge and looking for coyotes would let me focus my energy on one area of the park — preferably one that was not too crowded. Though it seemed like that would be a difficult feat considering the fact that everything seemed “full.” 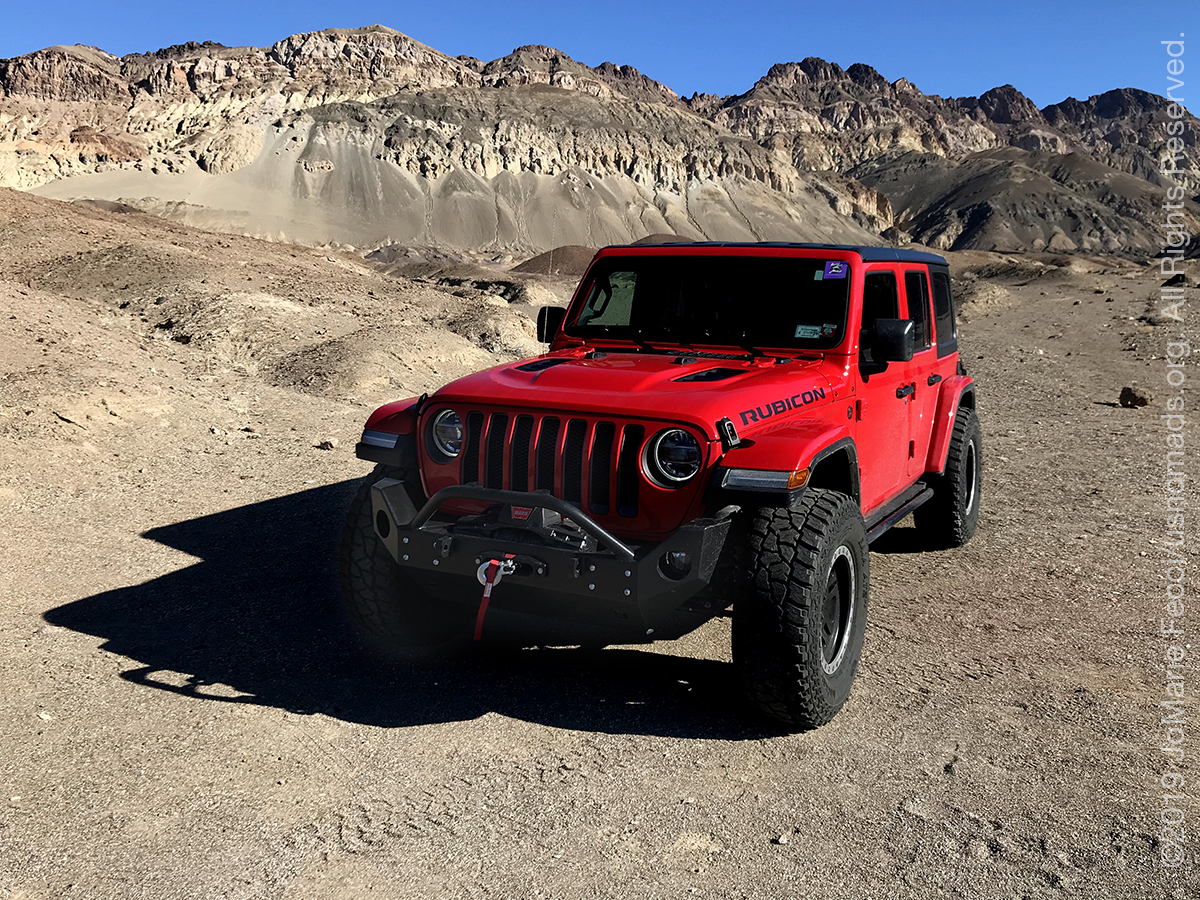 I made my way to the main visitor center at Furnace Creek and was able to find a parking spot and didn’t have to wait too long to check in with the park rangers to validate my entry pass. While I was there I asked for a map and almost as an afterthought, asked about the best place to look for coyotes. The ranger said that they are often sighted on Badwater Road, so I decided to make that section of the park my focus for the day. I took off southbound, and made my first stop the scenic Artists Drive loop. It was super crowded with tourists and I pretty much did just a drive through, stopping for some photos in a spot that was not an official “stop” but where I was able to pull over safely and photograph the Jeep against the iconic desert background.

If I wanted to get some solitude I realized I would need to go much further from the “main” attractions. I also realized my chances of seeing coyotes were pretty slim with all these people out and about. The time I had seen them here before it was when I had been on my way out of the park, far to the south, and away from pretty much everything. But nevermind, the “search” would give me a direction to explore in, and that was all I really needed. 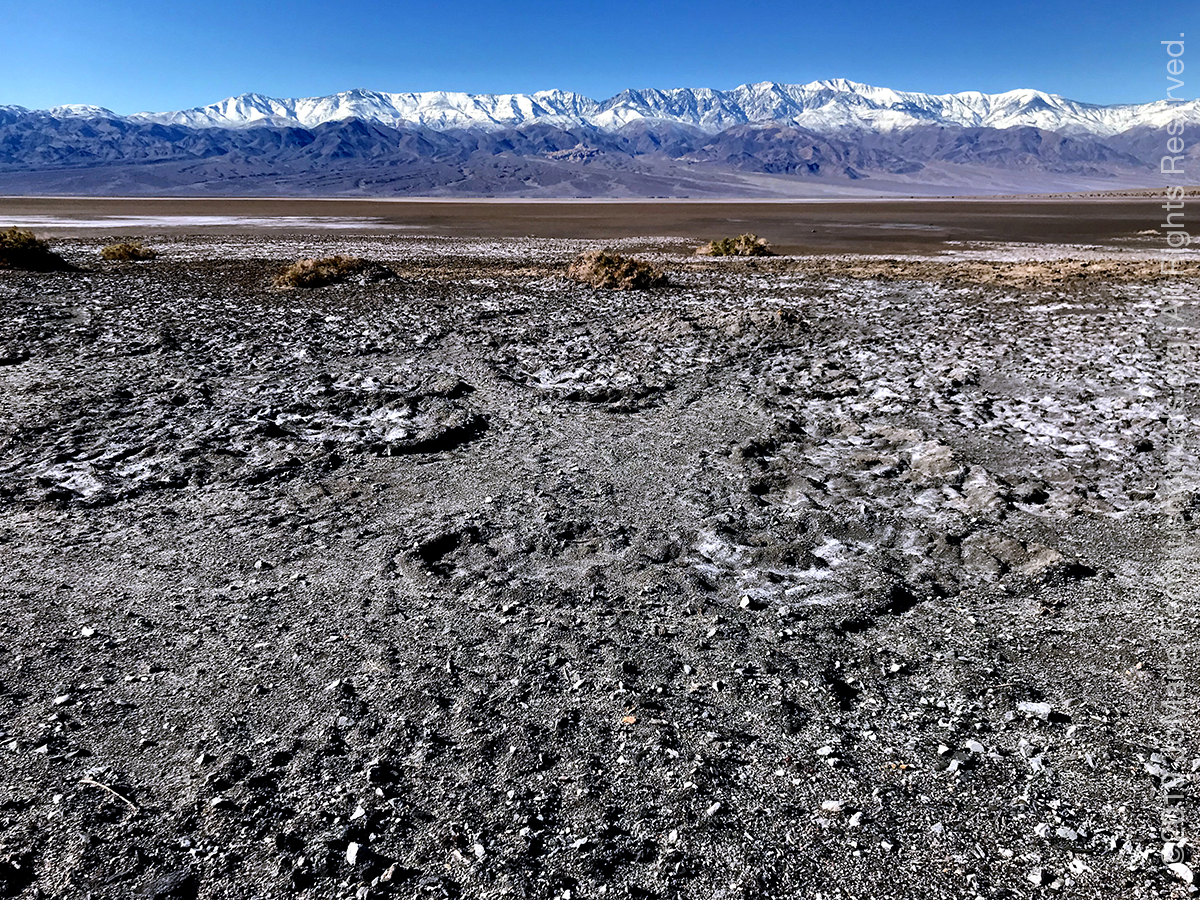 Leaving Artists Drive, I continued south on Badwater Road. Near the Devil’s Golf Course I hit a “traffic jam” of people trying to park along the side of the road because the parking lot was full. It seemed like the entire Badwater Basin Flats area was completely overflowing with tourists. I didn’t bother trying to stop there. Instead I drove a bit further down and pulled over for a photo of the flats and the snowy mountains behind, then continued my southbound route without seeing a single coyote. Maybe all the people scared them away or alternately perhaps the coyotes were staying closer to the campgrounds where people had food. 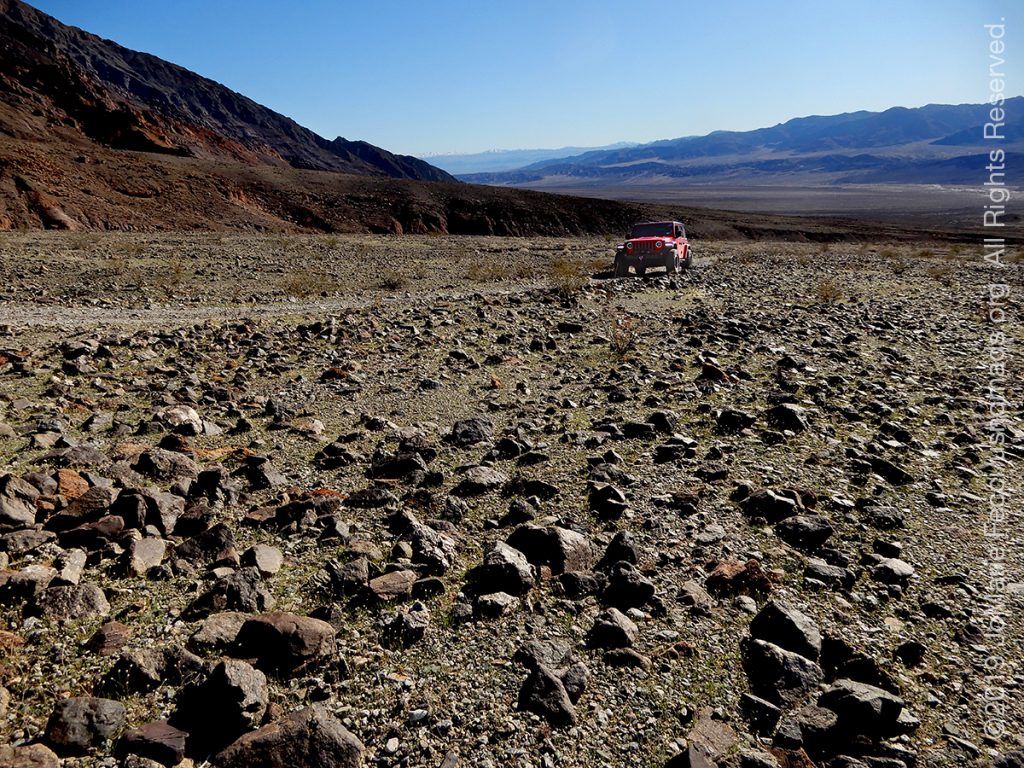 I stopped at the Ashford Mills ruins for lunch, hoping for some solitude, but my quiet was interrupted by two other tourists who decided to do a Facebook Live right there. As they talked at their phone loudly giving their friends a somewhat erroneous history lecture, I swallowed the rest of my sandwich and got back in the Jeep. I had noticed a small dirt road going towards the mountains in the other direction when I turned off for the ruins, so I decided see where it went. I confirmed on my map that it was in fact a “legal” trail, then followed it off the beaten-track to finally escape the crowds. As I drove slowly up the rocky hillside I savored the moment — I was the only one there. When I got to the top I realized that it led to the trailhead for a hike in Ashford Canyon to the east or Scotty’s Canyon to the west.

I wandered around the rocks a bit choosing a comfortable-looking one for a seat. The sun was warm on my back now and the air was clear. I could see across the valley to the mountains on the other side. It was awe-inspiring and peaceful at the same time. I lingered until the voices of hikers returning to their truck made me look at the time. The afternoon was getting on, and there are not so many hours of daylight at this time of the year. It was time to start heading back towards camp. 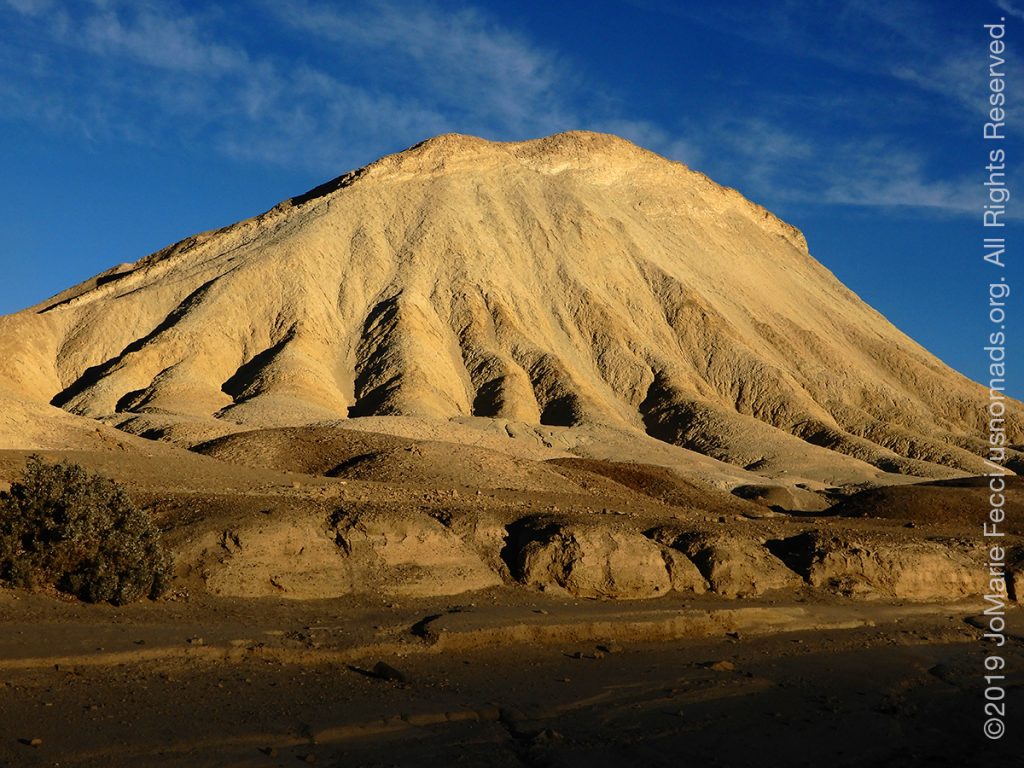 The sun was low in the sky by the time I arrived at the junction of Badwater Road and HWY 190, but I decided to check out a favorite loop drive — the graded dirt road that goes around something called 20 Mule Canyon. I remembered it as being an especially spectacular and very short drive, and it didn’t disappoint. The late afternoon light was working its magic on the canyon. The “walls” looked like petrified sand dunes. Beyond were the “badlands” which looked enticingly beautiful as the shadows grew long transforming the world. I stopped to watch the shadow of the mountains envelope the hills below.

It was only a short drive from there back to camp, where the sun had just set and the moon was already up. The first stars were appearing even though it was not yet dark. The chill of the desert night was beginning and I worked quickly to get my fire lit. 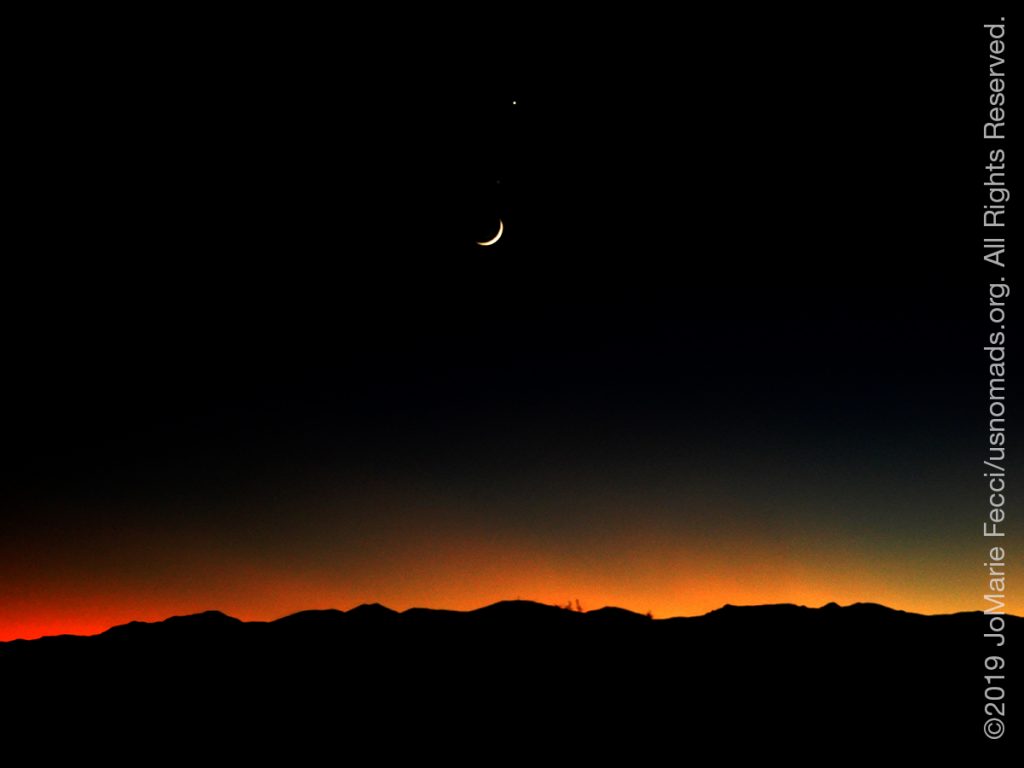