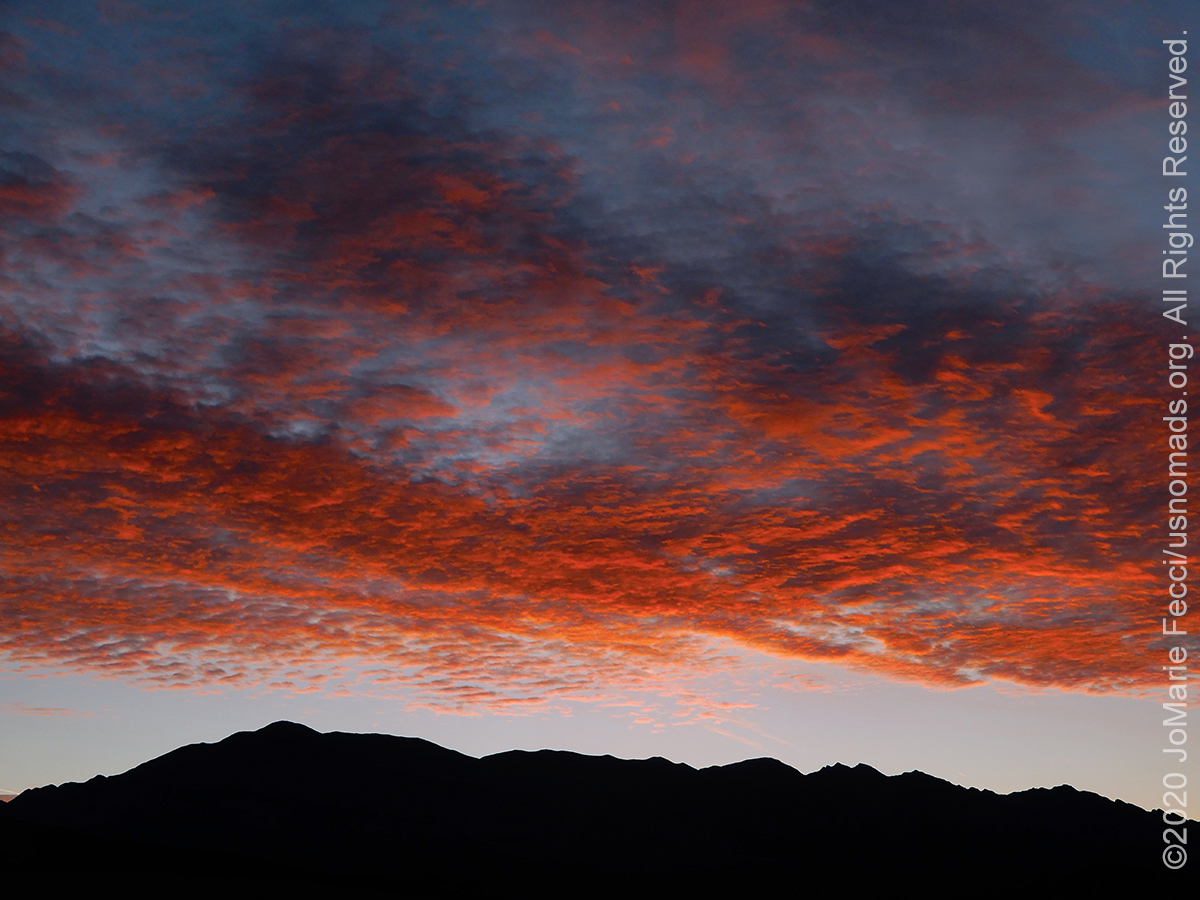 DEATH VALLEY, CA (29 December 2019) — I woke up just before sunrise, and the first hints of light turned the clouds a pink-ish red. I decided to try to go down to the Mesquite Flat Sand Dunes as it was early and perhaps there would not be too many people. Sand dunes are my happy place and I had to make an effort to visit them — even if only briefly — so I drove west as the sun inched up over the edge of the mountains in the east, lighting the still snow-capped peaks of the western Panamint mountains with a bright glow.

There were already people down by the dunes when I arrived. Most of them had probably come out earlier to catch the sunrise over the desert, and they were perched on the higher peaks in the distance. Everyone seemed in tune with the spirit of the desert, peacefully concentrated on the silent beauty of the morning. The light was magical. There seemed to be a struggle between the sun and the clouds, lending a painterly “texture” to the sky. 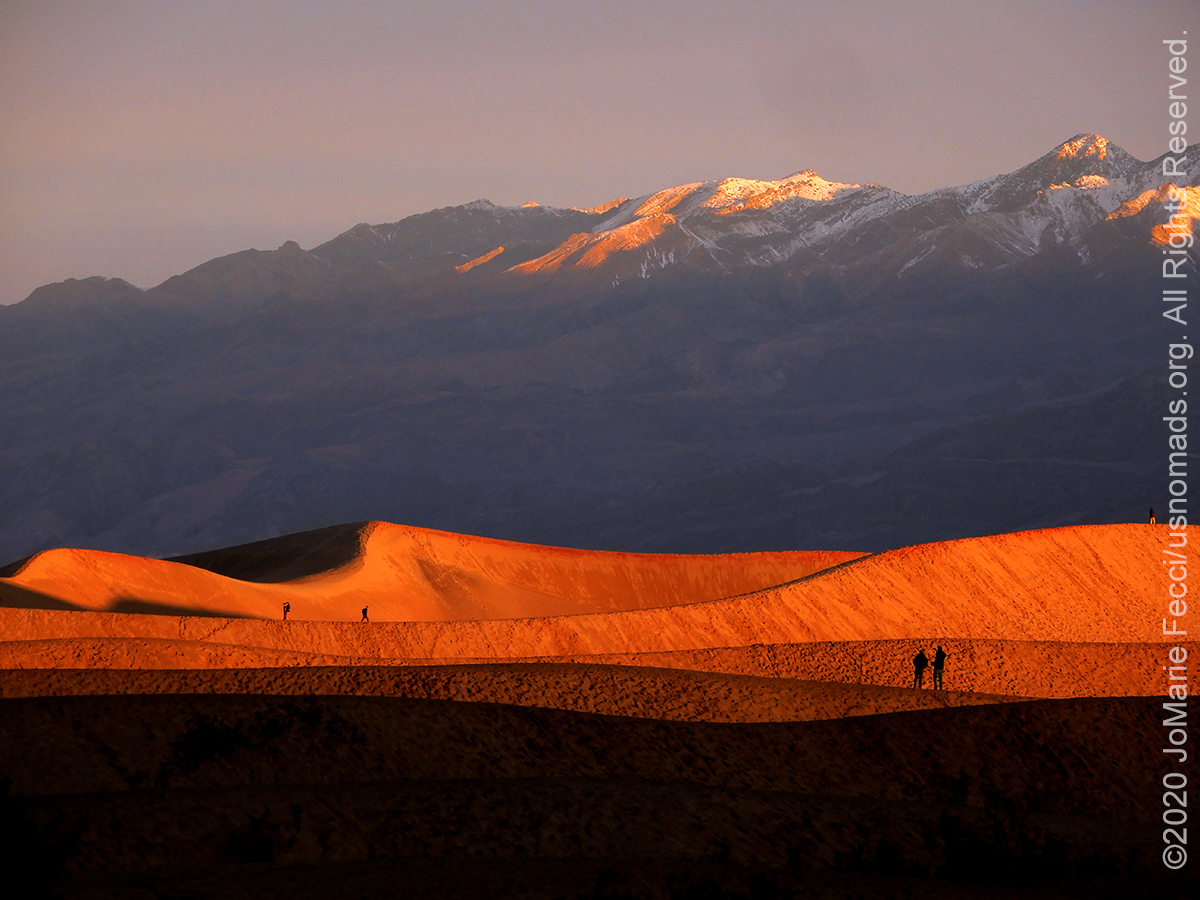 Greeting the dunes like old friends, I walked along the contours parallel to the sea of crests rather than making a beeline for the distant peaks. I lingered for awhile where the sand filled in the empty spaces between tangled masses of roots forming rounded mounds, the beginning of future dunes. The parched wood twisted and seemingly reached up to the sky in an unanswered prayer for rain. I could see the orb of the sun through the black roots, looking like the eye of god observing his own handiwork with a wink of approval.

Soon the sun was high enough to begin heating up the desert, and finishing my communion with the dunes, I headed back to the Jeep just as the first wave of morning tourists started to arrive. 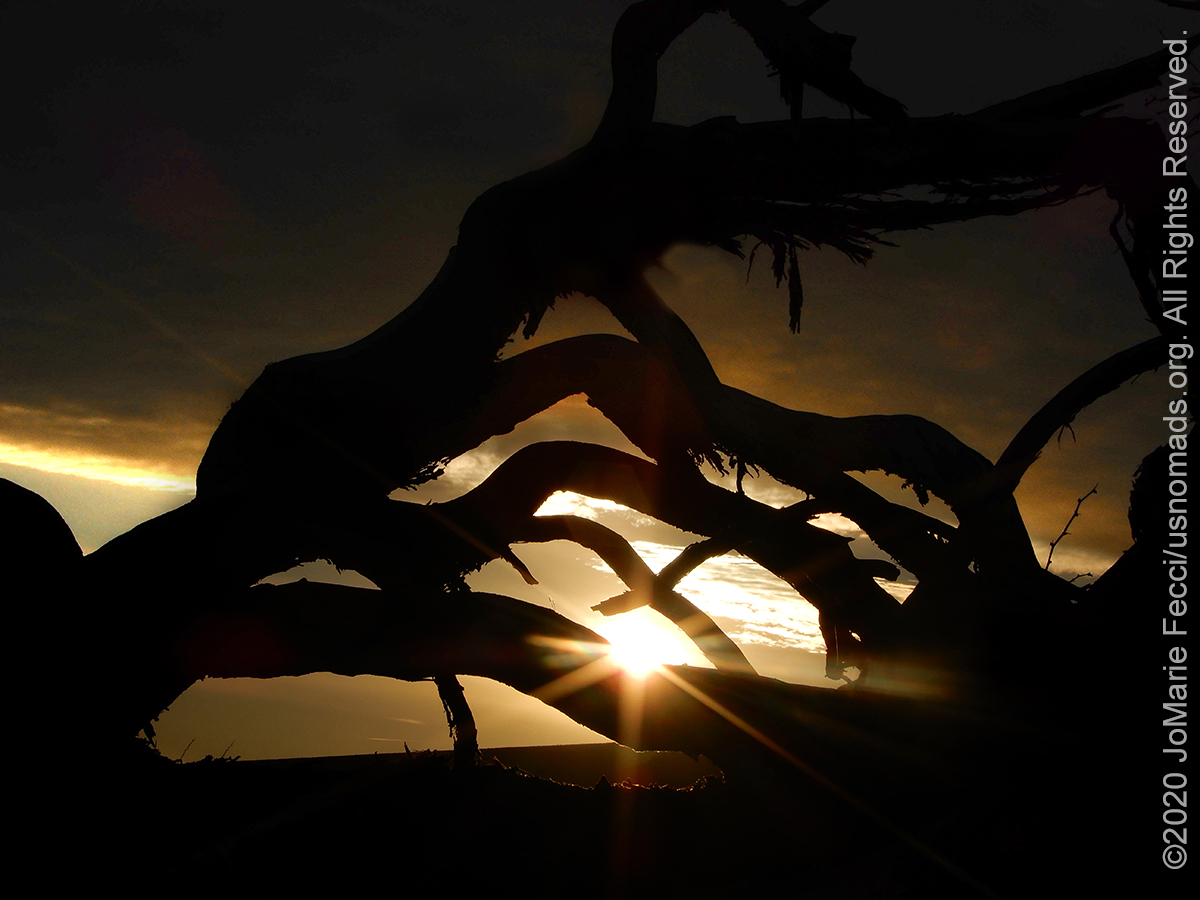 The day was still young and I picked up the loop through Mustard Canyon near the Harmony Borax Works. I don’t know much about the history of this small canyon, but it is a visually intriguing landscape, with a yellow toned crumbly rock surface devoid of any plant life, and though geologically it belongs to the Miocene Furnace Creek Formation (roughly 15 million years old) it looks distinctively different than the surrounding area.

I still had coyotes on my mind and in the afternoon I joined a “Ranger Talk” on the subject hoping to learn something new. Interestingly, the ranger was not really an expert on coyotes, but used her talk to link the animal with the coyote totem and then connected them both to “Death Valley Scotty” the famous real-life character who introduced much of America to this place back in the early 1900s. One of Scotty’s endeavors involved a train called the “Coyote Express” and the ranger seemed to “free-associate” the word coyote to tell a non-linear story. Her linkage was clever and though I had come to the session to learn more about the animal, I enjoyed the history lesson and the playful interpretation of Scotty, who was something of a con-man, as the Coyote totem “Trickster.”

As an added “bonus” to her Talk, the ranger guided us from a starting point at the Zabriske Point overlook, away from the crowd towards a nearby trail with its own magnificent vista of the badlands below. I made a mental note of the location so that I could come back and explore further in this direction on my own. 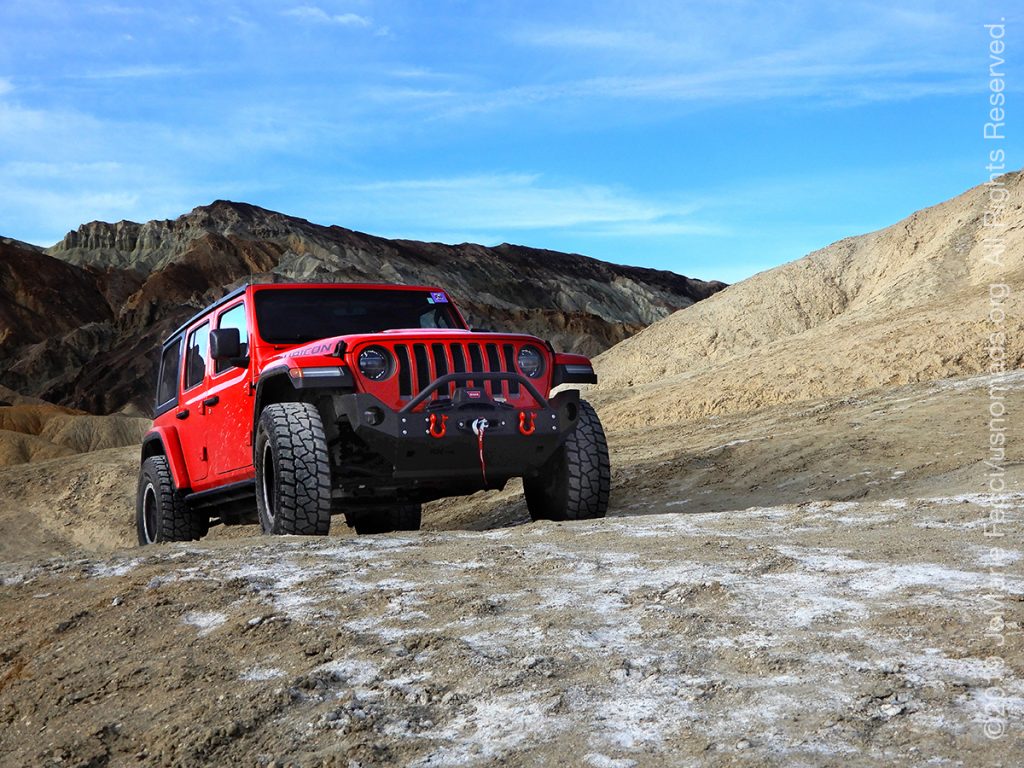 After the talk I returned to the Twenty Mule Team Canyon with enough time to do a little bit of exploring in the badlands rather than just going for a “drive through” as I had done yesterday. The complex beauty of desert “badlands” fascinates me, and I could wander in them for days without being bored. The badlands surrounding the Twenty Mule Team Canyon are like a maze of petrified sand dunes endlessly folded back on themselves. I stopped at one of the “pull offs” along the drive and got out to explore on foot, following the path between two “walls” as it turned behind the hills and then led up a ridgeline. There wasn’t really a “trail”, but I could see a faint “path” and it was really the only place one could walk — as if the terrain itself was guiding the journey. It was a strange feeling to be walking deep inside the folds of the earth, disappearing from the “trail” into the landscape itself. The surface of the “walls” felt like crumbly rock or more like a very rough dried and hardened sand compressed together but though it crumbled when you scraped it, it was solid enough to hold the weight of a person or a Jeep — or even twenty mules, I suppose.

As I continued following the contours of the terrain I thought about navigation and how people panic when they feel “lost” in the desert. Here I was meandering around in the badlands, out of sight of the Jeep and the trail, and yet I “knew” exactly where I was in relation to them. This simple confidence gave me the incredible freedom to be able to appreciate a special corner of the desert, to embrace its mysteries without fear. With enough time and water I think it would be possible to walk quite far into the badlands from this point, but I had neither so I started back towards the Jeep when the shadows began to get long.

Finishing the short drive around the canyon I stopped again at the point that the trail climbs to the place where it seems like we are on top of the world. I pulled the Jeep off the trail so others could pass, then got out to make some photos and watch the long shadows fill the canyons again, marking the eternal rhythm of the day.