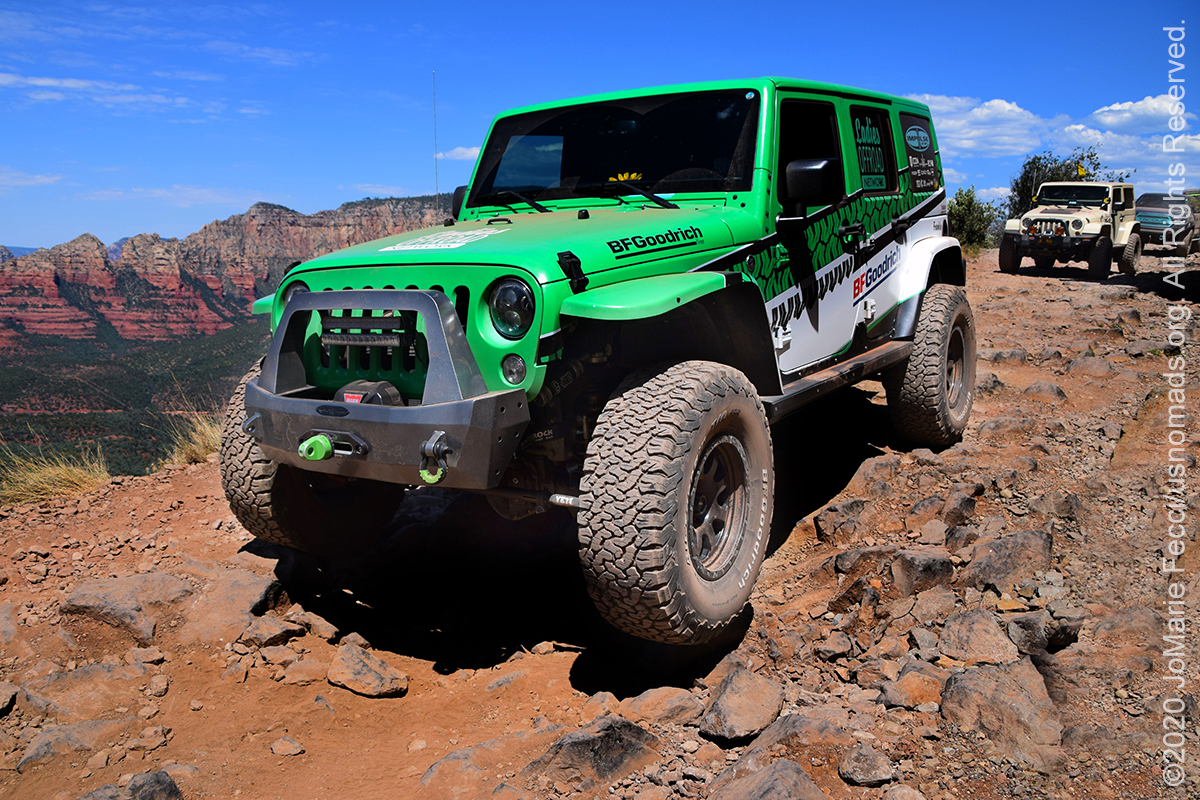 When Ladies Offroad Network had to cancel their annual convention due to the pandemic, they replaced it with a NonCon (i.e., a “non-event” event that was “not” a Convention) which turned out to be even more fun than the planned event!

Never one to give up in the face of a challenge, Charlene Bower, founder of Ladies Offroad Network, worked tirelessly to pull off the organization’s annual convention, scheduled for August 2020, until the last possible moment. When the pandemic finally forced her to cancel the planned formal event, she decided to “just go camping and wheeling” instead — and invited all the would-be convention goers to join her, if they wanted to. Little did she know at the time that she was starting a whole new “thing”. The informal camping and wheeling weekend morphed into what came to be called “NonCon2020”–a five-day extravaganza of offroad fun and education out in the woods “somewhere near Flagstaff, AZ.” 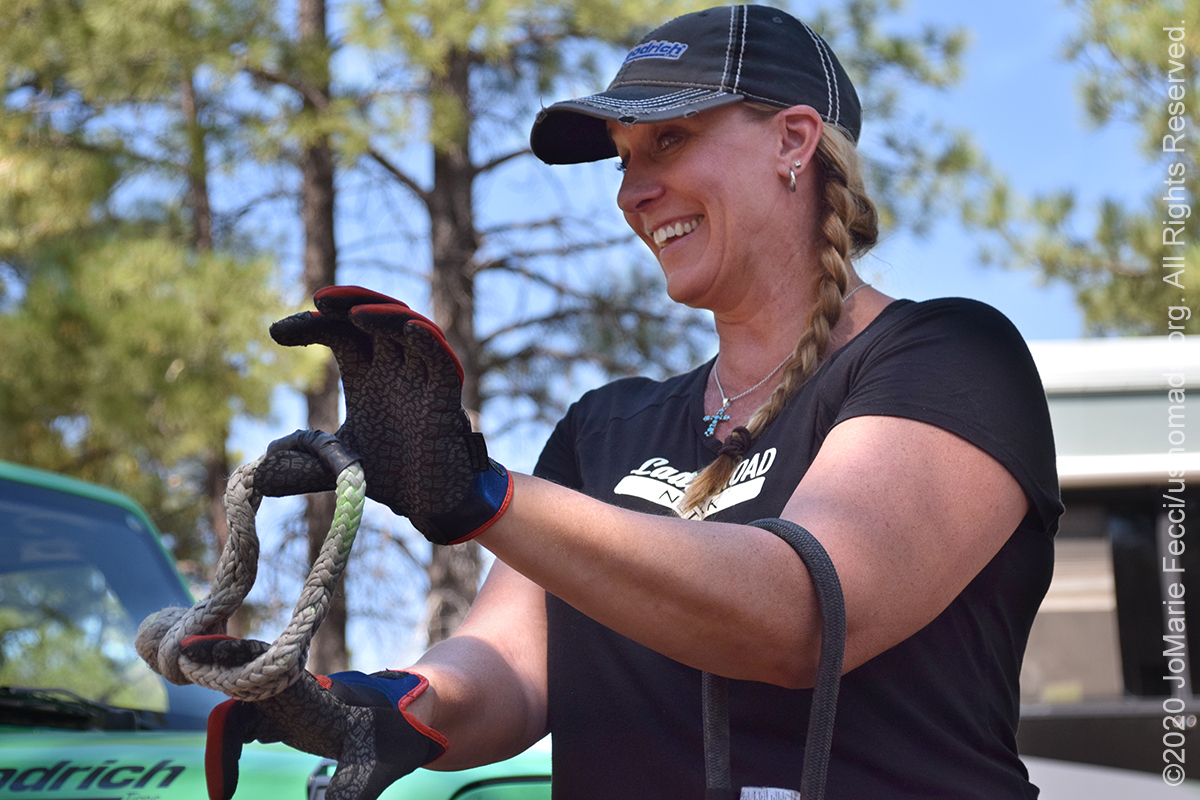 With just one week’s notice, ladies from all across the U.S.A. independently made the trek to northern Arizona to join Bower and a few special guests, not knowing what they were really in for, but trusting that it would be fun. Some came with campers and trailers, others brought their own tents and vehicles, and still others flew into PHX with plans to use borrowed camp gear. And in spite of the seemingly impossible logistics, it all worked out. From the 30th of July to the 3rd of August the ladies converged on a dispersed camping location in the Coconino National Forest which served as a base for daily wheeling trips in different areas of northern Arizona. 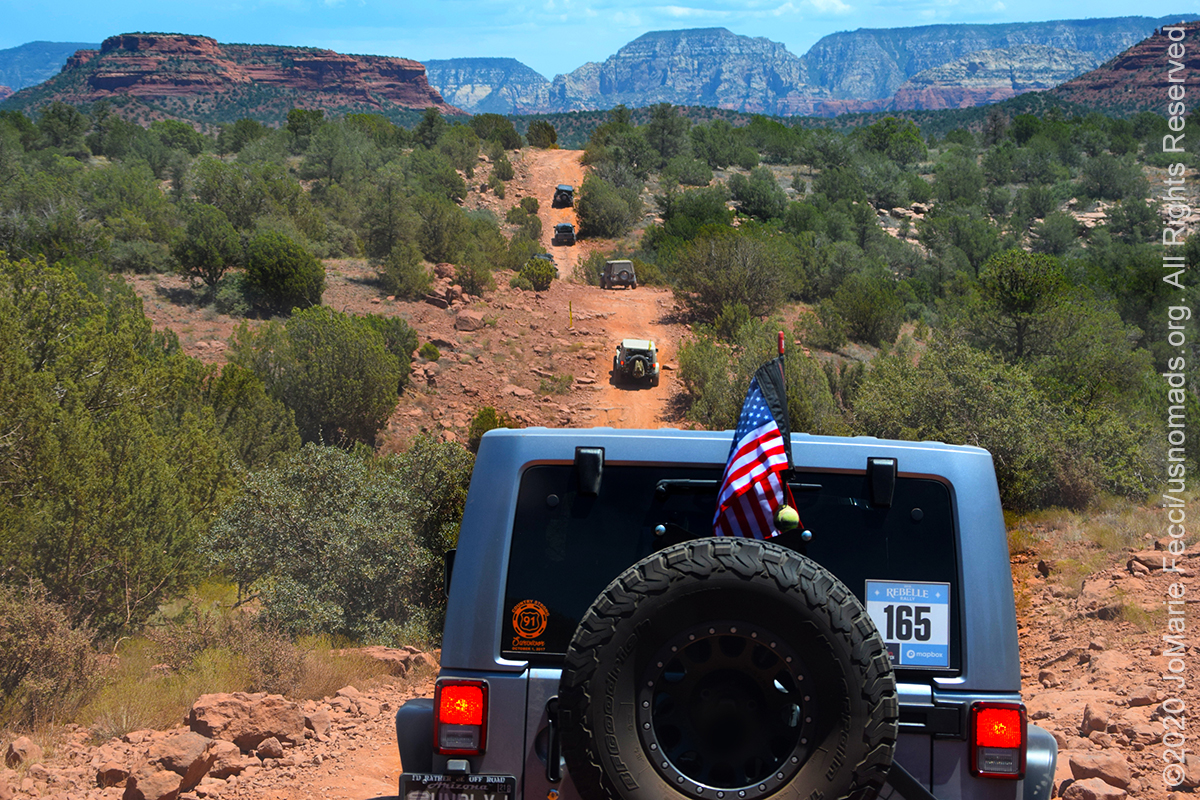 Though this was officially “not an event” and was “not sponsored” there was even an impromptu appearance by BF Goodrich Tires who joined the ladies for a night at camp and a day out on the trail. Over the course of the five days the “NonCon” evolved into something unique — while the Ladies Offroad Network’s Annual Convention is a formal conference-type event that features educational seminars and a variety of learning opportunities, the “NonCon” became a combination of fun and learning in an outdoor setting, with wilderness camping (some would even say “glamping”) and real-world off-road trail runs. Of course there were also plenty of shenanigans, great food and a rocking camp bar to round out the experience. 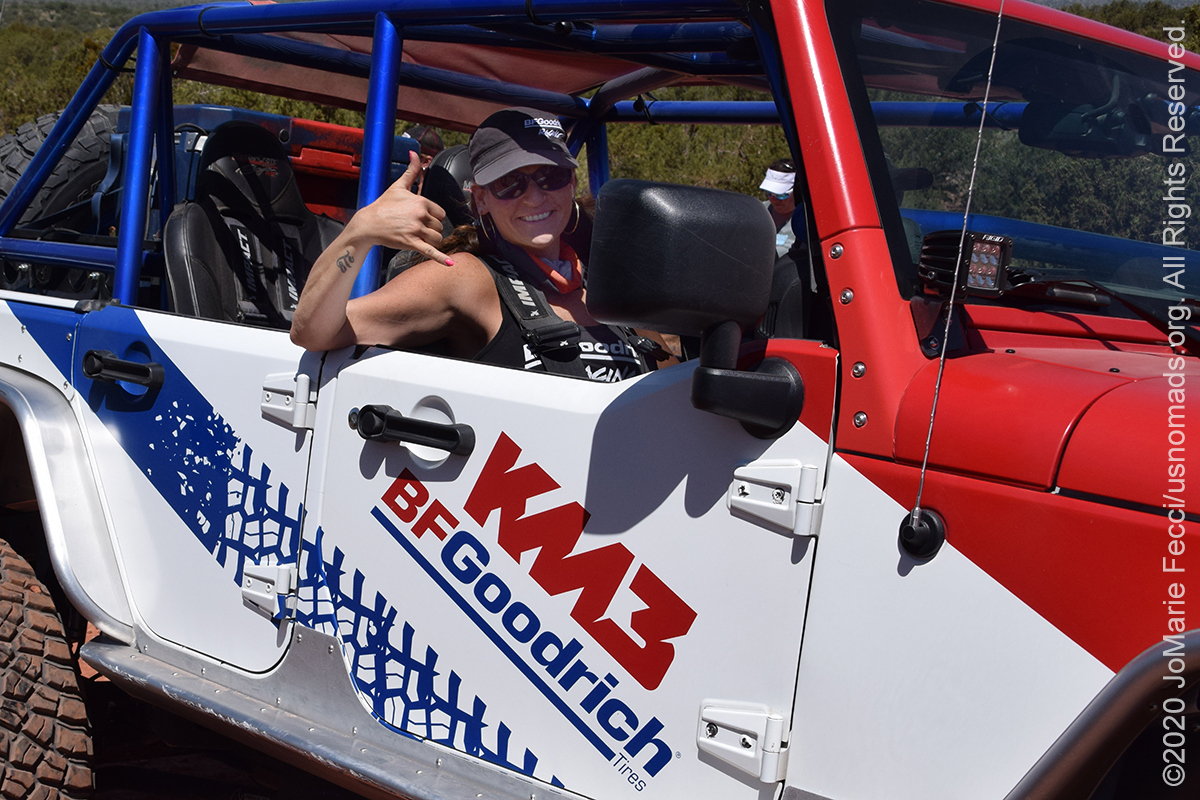 The specific trails were chosen by the group and ladies who flew in partnered with ladies who brought their rigs, switching it up daily so that everyone had a good chance to get to know each other. And while the trails were scenic and stock-friendly, Bower found ways to create teaching moments so that everyone worked on improving their driving and spotting skills. Ladies were encouraged to take harder optional lines up rocky steps or to confront their discomfort at being off-camber. There were also more formal training and hands-on exercises back at camp, including a review of recovery gear, winch operation and vehicle towing. 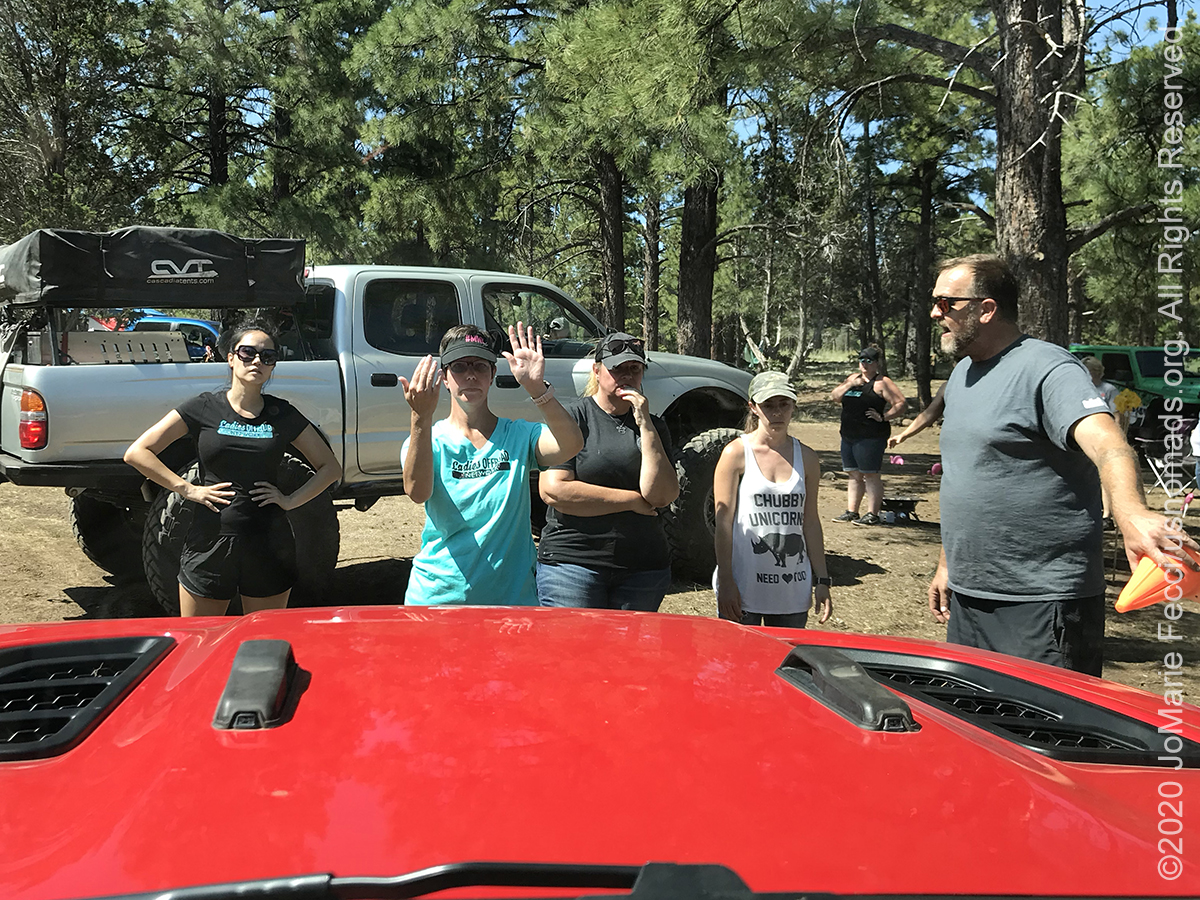 In one exercise the ladies were tasked with lining up the jeeps in a perfectly parallel row, with front passenger tire touching a small orange cone. It seemed simple enough, but was actually quite challenging as drivers and spotters found out while they worked as a team to complete the maneuver with input from the group. The key became communication via clear hand signals and from a distance it may have looked like an exaggerated game of pantomime as participants soon evolved their initially hesitant hand gestures into large sweeping arm movements directing drivers into place.

Lessons learned in the spotting exercises were put into practice out on the trails as participants guided each other over optional obstacles with Bower giving occasional advice or instruction. With a wide variety of vehicles and builds in the group which included assorted Jeeps, Toyotas and a Ford Raptor, each rig was given a slightly different line highlighting the varied capabilities. Participants’ off-road experience levels varied too. Seasoned trail leaders, rally competitors, and long-time overlanders worked side by side with women new to the sport, and every experience level in-between. No matter their off-road history, everyone appreciated the hands-on opportunities to try out their newly honed skills in the real-world trail setting. 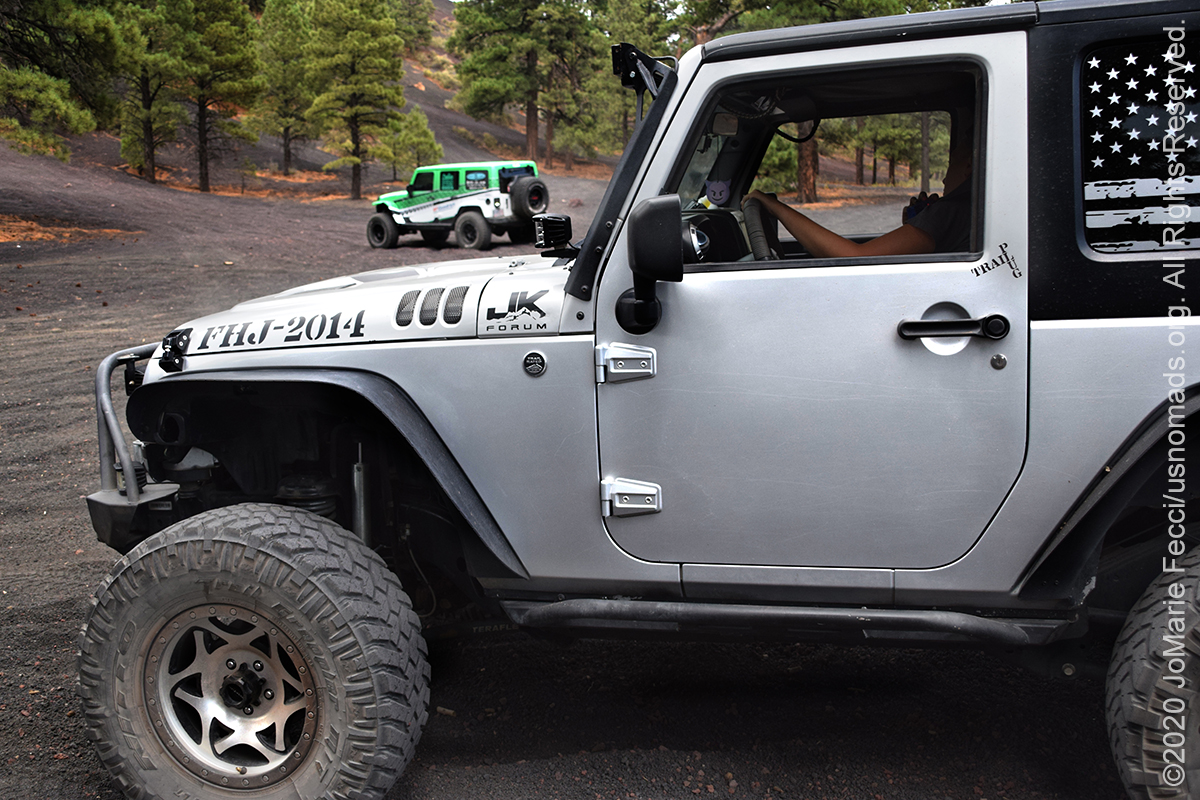 Over the course of the “NonCon,” participants got to experience a variety of terrain types — from the red rock of Sedona to the black ash of the volcanic Cinders — with breathtaking scenery all around. There were moments when the dramatic landscapes vied with the offroad driving challenges for the focus of attention as the 360-degree experience enveloped participants on every level. While some of the ladies were from around Arizona, for many this was their first time on these scenic and adventurous trails. Cameras and phones were out documenting the details and the camaraderie within the group made it even more special.

Though most participants had just met on the first day of the event, everyone had quickly “clicked” into a positive group dynamic which made for great fun during some of the creative team-building “activities” back at camp. Each evening after formal “activities” had ended the whole group would meet up for dinner around the “campfire” (which — in consideration of the fire-danger in this part of Arizona — consisted of two propane fire pits even though “fire restrictions” were not actually in place) lingering on into the night at the well-stocked camp “bar.” 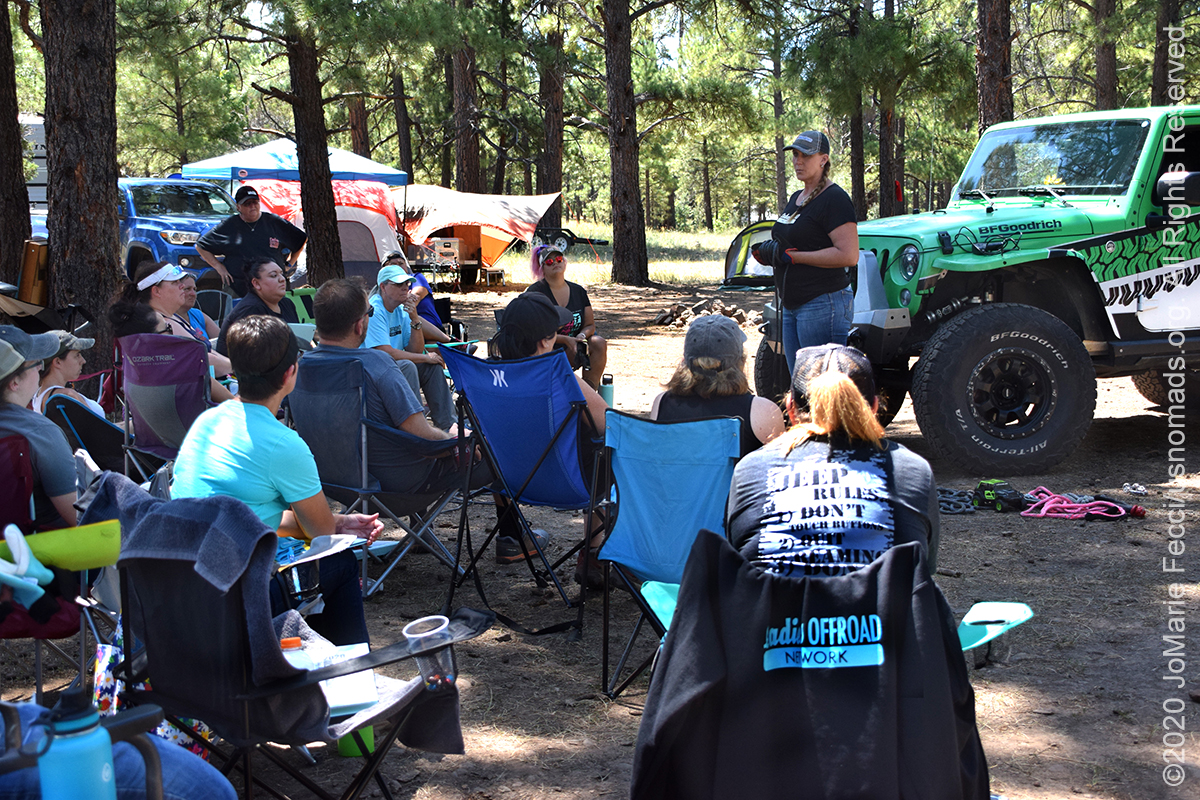 After all the complications and roadblocks to trying to hold the formal event, it seemed like the stars aligned for this informal gathering. The notoriously fickle Arizona “monsoon season” weather cooperated (mostly, apart from a short hail storm on the way back from one trail) and no one broke anything. On the final day the group wrapped up the “NonCon” with a relaxed touristic outing to the Grand Canyon National Park. It was a picture postcard moment and a great opportunity for everyone to see the South Rim without the usual huge crowds. Later that afternoon, as the ladies started packing up camp and preparing to go their separate ways, everyone was already asking when the next “NonCon” would happen. 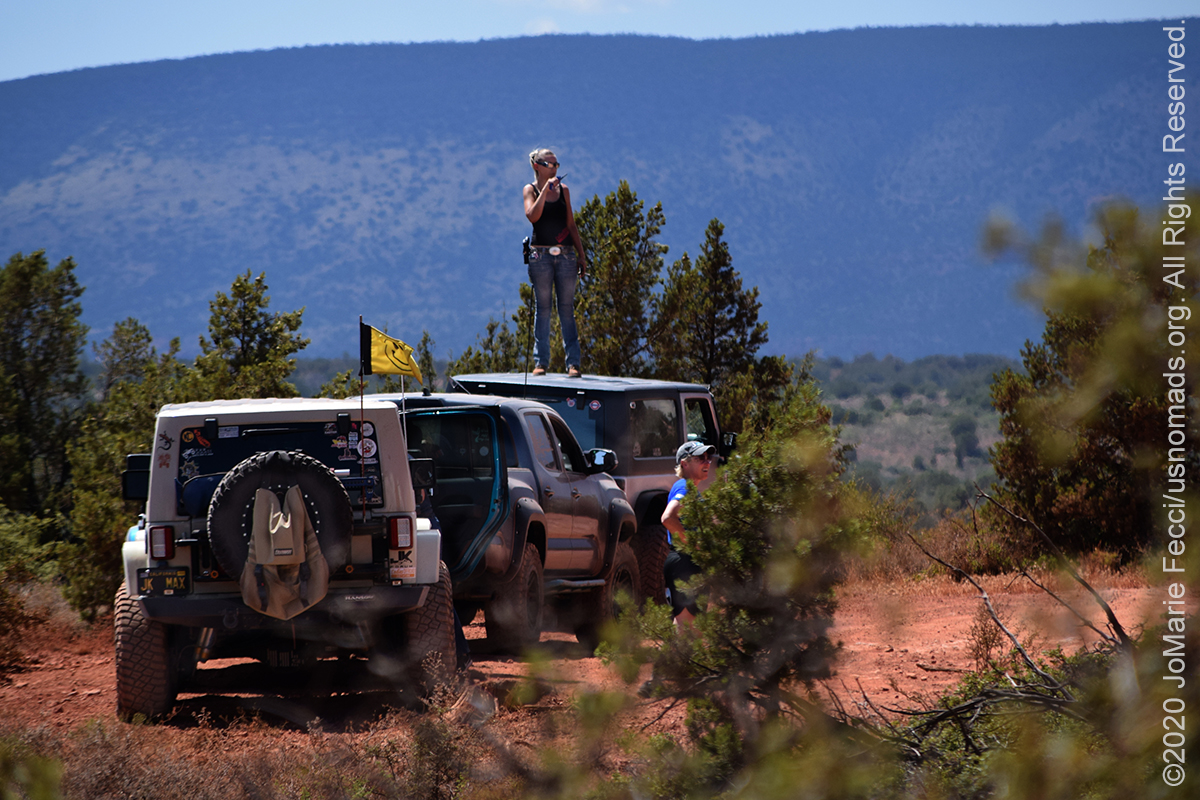 Flagstaff, Arizona lies near the southwestern edge of the Colorado Plateau and within the San Francisco volcanic field, along the western side of the largest contiguous ponderosa pine forest in the continental United States. The city sits at around 7,000 feet, just south of the San Francisco Peaks, the highest mountain range in the state of Arizona. The geology of the Flagstaff area includes exposed rock from the Mesozoic and Paleozoic eras. Originally settled by the pre-Columbian native Sinagua people who left sometime in the fifteenth century, the area of Flagstaff was home to the Yavapai when the first european settlers arrived via a wagon road to California in the 1800s. The first colonial (non-Native) settlement in the area was a saloon on that wagon road opened by Edward Whipple in 1871. By 1886, Flagstaff had become the largest city on the railroad line between Albuquerque and the west coast. The city saw its first tourism boom in the early years of the 1900s, becoming known as the City of “Seven Wonders” – listed as the Coconino National Forest, Grand Canyon, Oak Creek Canyon, San Francisco Peaks, Sunset Crater, Walnut Canyon, and Wupatki National Monument. Local businessmen lobbied for Route 66 to pass through the city, and it was completed in 1926, turning the city’s main industry from lumber to tourism. Flagstaff is one of the United States’ sunniest and snowiest cities, with a variable “semi-arid” climate and a monsoon season in summer. Wind in Flagstaff typically blows southwesterly throughout the year. Flagstaff experiences the full four seasons, with cool winter temperatures averaging 45°F and warm summer temperatures averaging 80°F. Spring begins in April with pleasant weather, but sometimes, snow reappears in May (and is not unheard of in June). Summer daytime temperatures can reach above 90°F with cooler nighttime temperatures typically in the region of 40°F. During monsoon season in July and August thunderstorms occur almost daily. Freezing temperatures (below 32°F) return towards the end of September, with the fall daytime temperatures around 60°F. Snow comes in November, with winter marked between periods of snowfall, typically from November until mid-April….

The Ladies Offroad Network was created in 2016 by Charlene Bower after the overwhelming response to her initial “Ladies Co-Driver Challenge.” Through the “challenge,” Bower, a BFGoodrich Performance Team Member and Off-Road Motorsports Hall of Fame Industry Rising Star, used her industry “insider” status to provide exceptional opportunities to ordinary women. The contest was wildly successful with 91 women from across the country competing to be co-driver of the BFGoodrich Tires Jeep in one of three events. Bower saw the need to expand the opportunities for women wheelers and launched the Network building on the momentum of the Challenge events. The Ladies Offroad Network held its first Convention in 2017 with the idea of creating a space where like-minded women from around the country could learn more about offroad activities and share their experiences. The 2018 event grew to more than double in size and offered an action-packed, interactive 4-day weekend educating, motivating, and guiding for ladies involved in all aspects of the offroad world. Membership in Ladies Offroad Network is open to any woman who is interested in offroading. For more information: ladiesoffroadnetwork.com…

NOTE: All text and photos are copyright JoMarie Fecci/USnomads unless otherwise noted. If you would like to use any imagery here, please contact us for permission. This article is based on the trip conducted on 30 July – 3 August — conditions can change, so please check the most current conditions and policies before setting out. For more information about the specifics of this trip contact us.