Preparing for an expedition in the Sahara requires more than just driving skills, there is a whole range of things to consider that can fall under the heading of “expedition management”: it requires a knowledge of different vehicle types, their capabilities and weaknesses, evaluating other drivers, trail guiding or spotting drivers, convoy management, and recovery.


Strange to find myself in the frozen winter landscape of Connecticut when I am training for an expedition in the Sahara, but I am here at the Overland Experts facility to get some insight into the skills I will need to manage an independent expedition in North Africa. OEX, founded by Bruce Elfstrom, has the knowledge and experience to help make the process of preparing a trans-Sahara project easier. The group trains military special forces as well as NGOs, humanitarian aid and disaster relief agencies for complex operations in remote and difficult terrain. They have put together a customized program to address some rather “unique” needs relating to our project.

Before we could get out in the field, we needed to spend some time in the classroom reviewing the essentials, beginning with a methodical rundown of the different types of vehicles we are likely to come across, the possible configurations of 4WD systems, suspensions, and more. With this base, I would be better able to assess vehicle capability, which will be important when I am putting together local crew, because while the main project vehicle will be a modified Jeep prepped in France or the US, the vehicles for support teams must be sourced on-site in Africa. The ultimate success of the project could depend on the capabilities of the weakest vehicle in the group.

As we move from theory to practice OEX instructor Erik Eisensmith takes me out to a fleet of trucks which include some that are unusual here in the U.S.A., but typical in the places we are likely to operate — a mix of Land Rovers and Toyotas, diesels, right-hand drive, modified and stock. I would begin training in a diesel Toyota HiLux with manual transmission — quite a switch from my JK. The HiLux was bigger than my Jeep and it took me a while to get comfortable with driving a manual again. The diesel engine seemed somehow more powerful.

We took the Hilux for a loop in an old quarry pit designed to present specific obstacles, but rather than simply drive the course, we practiced “fail scenarios.” This was an interesting exercise and reminded me of flight training where we constantly rehearse emergencies so that the proper procedure becomes instinctive.

Simulating a “too steep” hill climb, I took the truck two thirds of the way up the incline, then quickly shift into reverse, release the brake and let the vehicle go straight down backwards in gear without braking until on level ground. As the backward moving vehicle begins to pick up speed it becomes increasingly disconcerting and I have to make a conscious effort to resist the urge to step on the brake.

Looping around the course, I am faced with a scenario requiring driving off-camber on a side hill, something we would normally avoid. But Eisensmith points out that there may be situations in the field where we have to get across this kind of terrain. The key to doing that safely is to start as high up on the hill as possible, because the vehicle will start to slip sideways downhill, then we need to move as fast as possible so that we reach the objective on the arc of the slip. The maneuver was very counterintuitive, so we built up to it by driving off-camber until I felt tippy, then driving into the fall as fast as possible to descend the hill and straighten out.

Nothing could feel more “wrong” than driving in the direction you feel you are falling! However, it is imperative in this situation, because if we drove “away” from the fall we would likely tip the vehicle. I repeated the maneuver several times with the Hilux, and then in my own JK, for comparison. I was beginning to see that the vehicles handled very differently.

As the day wore on we moved into more difficult forest trails with increasingly steeper grades and more obstacles thrown into the mix, repeating the “fail” exercises at various points along the way.

Deep in the woods we were picking our way through a field of large rocks, “scouting” on foot to determine a line that could work. As we walked, Eisensmith likened it to a chess game, explaining that we should always be looking ahead a few moves, rather than directly at the obstacle in front of us. To move “quickly” through this kind of terrain we will need to work as a team, with a “man on the ground” guiding the vehicle along a carefully considered line with maximum precision.

That is easier said than done, as I am learning on this trail. Determining a line on the purpose-built course is actually fairly straightforward. The hard part is accurately putting my wheel someplace I cannot see. If I am not right on target, the wheel can slip down the side of the rock, crashing the underside of the vehicle onto the obstacle I was trying to get over.

With careful spotting from Eisensmith, I easily “step” from rock to rock, clearing the course quite quickly. Then it gets harder. For the next segment I have to guide him through. Key takeaway: Giving accurate direction is a lot more complicated than following direction.

For the Sahara project we will be using a combination of old Russian topo maps and GPS, but as much of the area we may be traveling in doesn’t have actual “roads” or even necessarily well-used “pistes,” careful navigation will be key. Overland Experts’ land navigation specialist, Johnathan Mckenzie, is showing me a series of topo maps, that we will use for our next exercise.

Explaining that when driving in a place we’ve never been, we will need to know how to use “clues” on the map to select the best route before we’ve actually seen the landscape, he points out terrain features that are typically good choices to drive, such as ridgelines and spurs. Then we headed out into the field with the maps to “warm-up” with some easy vehicle-based “where are we” exercises, before spending the afternoon refining map and compass skills.

As the sun began to set, we wrapped up the day’s lessons into a final complete exercise that would continue into darkness. We were going to drive to a “checkpoint” plotted on the map, using our compass and the vehicle odometer, just like we would do in Gazelles. I plotted the straight line course, then a “route” along existing trails, with waypoints at each turn, noting the heading and distance for each. It was now dark in the forest, and we could barely see ten feet down the trail. I took the first compass heading and when we reached the specified distance we did not see the expected turn in the trail.

This was disconcerting, but Mckenzie explained that it is not “exact” because the trail is not truly straight, and our measurements were in increments of 1/10th of a mile, even if the actual distance is somewhere in between. Within the next 1/10th of a mile we saw the expected turn in the trail. We continued along in the darkness, and found that we were roughly within a 1/10th of a mile margin of error overall. Strangely, the uniformity of the margin of error for each waypoint seemed comforting. I started to “know” that we should probably see the feature within that distance, and the repetition of results gave me confidence.

The next segment of training was at the OEX Virginia location, where Garrett Porterfield, OEX Director of Training, was teaching me some skills to handle situations where things have gone really wrong.

The OEX program is geared toward military missions where “turning around” is not an option, so the focus is on “problem solving.” This is exactly what we needed for our trans-Sahara project, which has some inherent risks that are similar in nature to military operations — once we are en route in the middle of the desert we need to get to our next waypoint or a secure alternate, we don’t have anyone we can call in for “extraction.”

Solid decision-making will be key for each segment of the journey. There needs to be an “alternate” secure waypoint, a clear “turn-back” limit (the point after which we must go forward), and an advance plan for emergency movement should a security situation arise. Being able to evaluate the terrain and pick lines is only the beginning.

We were going beyond the standard recovery training in how to use our basic tools — straps, the HiLift jack and the winch — to look at solving complex scenarios in the field. We flipped a Landrover so I could get some hands on experience in uprighting an overturned vehicle. Porterfield walked me through the process, step by step. I was already familiar with the principles of winching operations after getting stuck in a few deep mud holes on the driving course, but the rolled vehicle presented other issues. Our “scenario” included the supposition that this happened in a tight space and we could not get to the “best” side to just pull the Landrover back onto its wheels. Instead we would have to use a snatch block to reverse the pull direction. As we ran the winch and the Landrover slowly began tipping back in the right direction, it almost seemed magical.

After the fun with the Landrover we went over some innovative things we could do with the HiLift jack. I was intrigued by the creative ways of using these pieces of equipment to “fix” almost any “stuck” scenario.

It was time to put it all together into a final field exercise where I would have to overcome some obstacles that the vehicles could simply not get over without intervention. I would need to figure out for myself the combination of tools and procedures to get through it. As I set off for the course feeling up to the challenge, I realized the most important lesson Porterfield was teaching me: There is no “stuck,” there are only problems that need solutions. Find the right solution and keep on going. 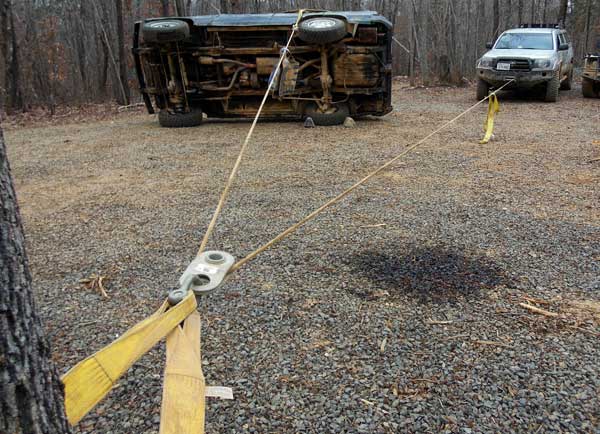 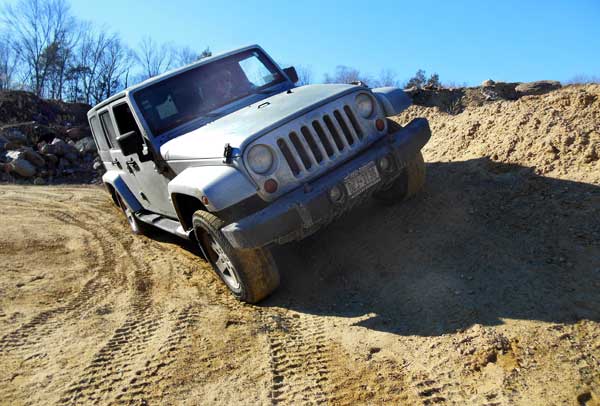 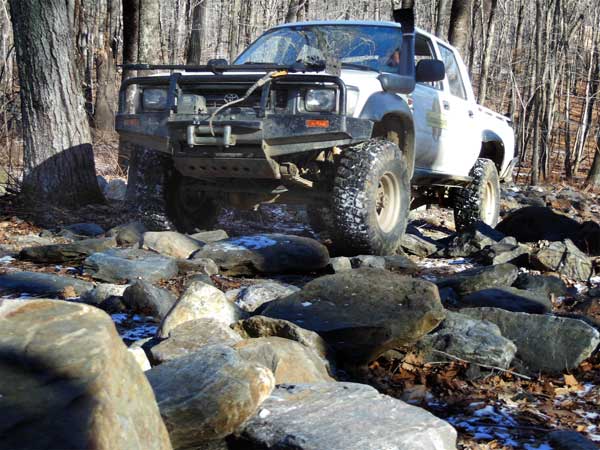 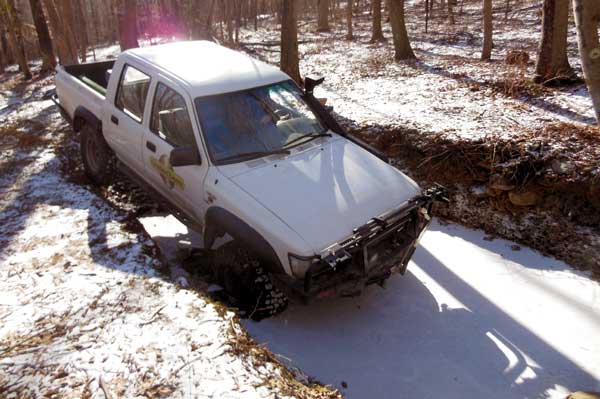 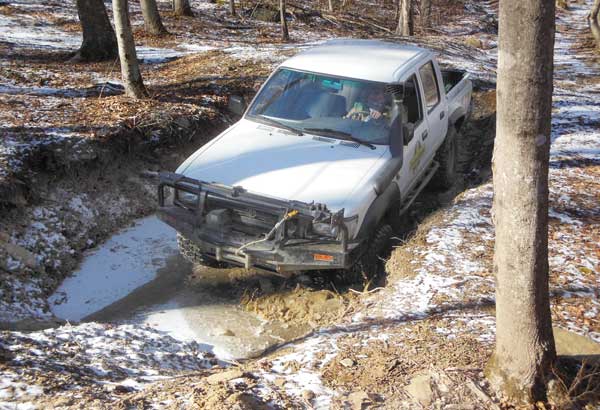 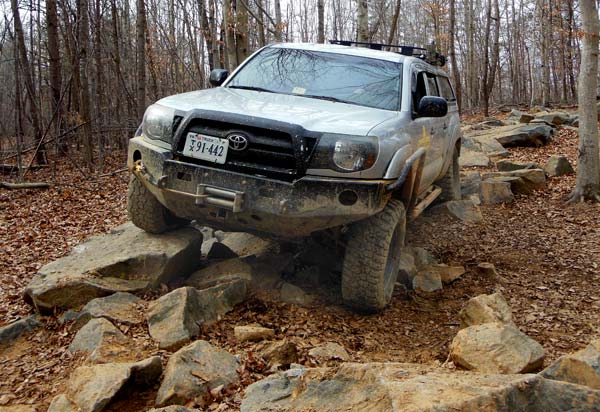 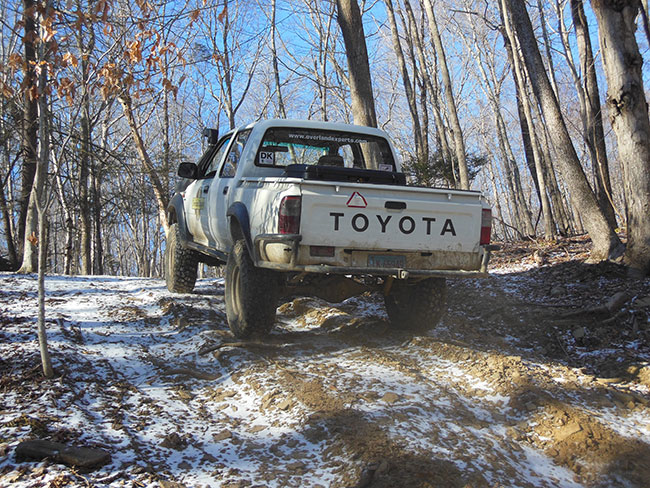 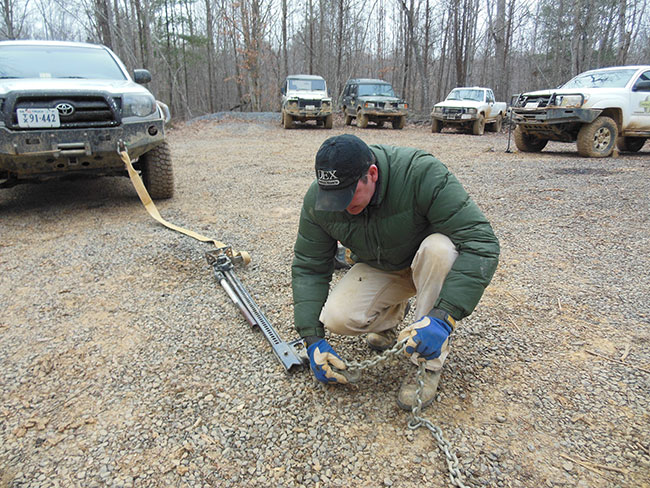 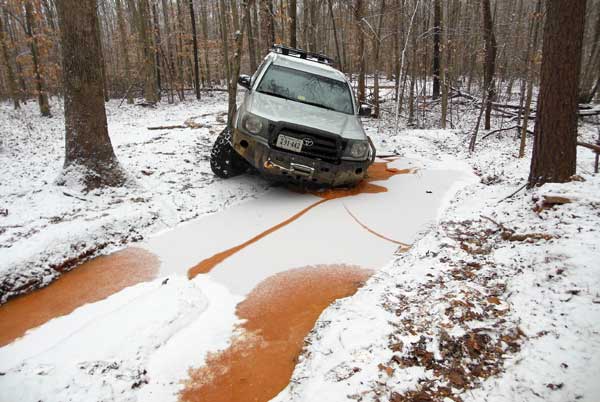 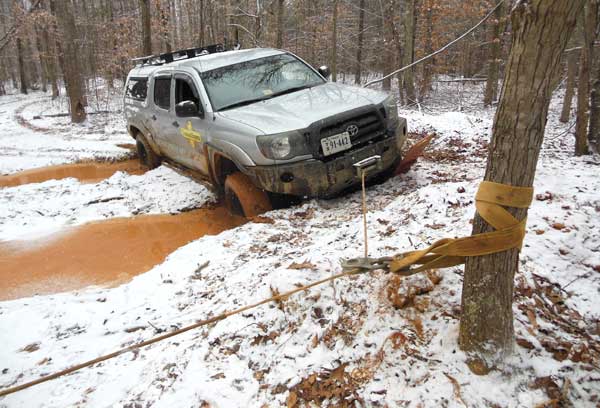 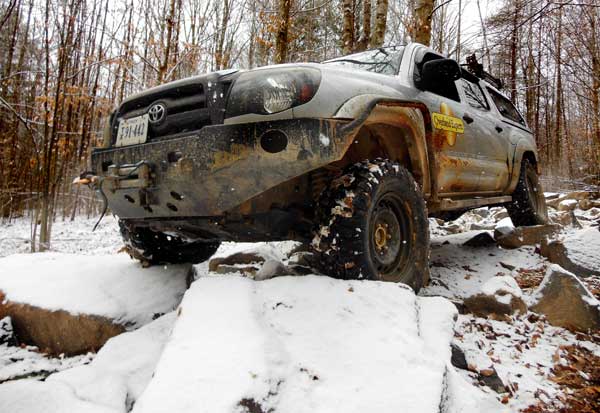 Overland Experts, founded by Bruce Elfstrom, provides driving and expedition management training programs for the military, humanitarian organizations, professional and recreational drivers. With purpose built trails and obstacle courses at locations in Connecticut, Virginia and North Carolina, they offer comprehensive training in a full range of vehicles and scenarios.

Overland Experts permanent locations are on the east coast of the U.S., but their teams travel globally to provide custom training on any terrain.