From Paper Maps to GPS and Back 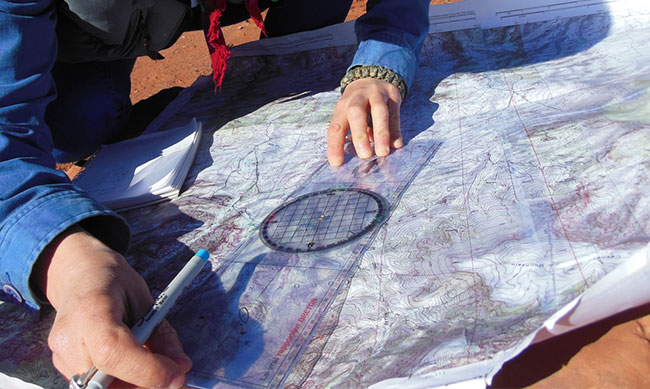 Exploring new trails and unfamiliar routes often requires using paper maps, digital mapping tools and GPS units. When working back and forth between them, there are a few key details that are important to understand for accurate navigation.

During a recent desert trip with a group we discovered how critical it was to know the different formats used to indicate latitude and longitude coordinates.

At the morning briefing we read the co-ordinates for the afternoon rendezvous point off the map: “Thirty-two, zero-four, twenty. One-fourteen, twenty, thirty-six.” The drivers all noted the coordinates and plugged them into their GPS units. The Jeeps went off into the desert in small groups, all heading essentially in the same direction, taking different lines based on their capabilities. Some hours later most of us were at the rendezvous point, but one group was missing. We radioed the missing group leader to find out if they were stuck or had encountered a problem. He replied that they were already at the rendezvous point and were waiting for the rest of us!

We asked him where they were, and he read back the coordinates we had given at the briefing. We checked our own coordinates. They were the same. Assuming the group leader’s GPS unit was malfunctioning, we sent out two Jeeps to locate the “lost” group. It didn’t take long to find them, as they were not far off from the correct position. Examining the errant GPS unit, we realized it wasn’t malfunctioning afterall – the driver had entered the coordinates in the wrong format!

Latitude and longitude are expressed in degrees, minutes and seconds, with sixty minutes in a degree and sixty seconds in a minute. However, there are three different ways these coordinates can be written.

Most GPS units have the option of switching between formats. If your GPS has this feature, make sure you set it for the format you are using. If it doesn’t you may have to convert the coordinates from one format to another. (Here is one handy converter: https://www.fcc.gov/media/radio/dms-decimal).

Researching an upcoming trip, we found a great “trail map” for an area we were going to explore that someone had thoughtfully shared online. They had plotted a series of waypoint markers on a Google map labeled with directions such as “turn right” or “continue straight” etc. However this was a Jeep trail in the middle of the desert with no clear landmarks or mileage indications, so we needed to get the actual coordinates of each marker.

Using the “classic” version of Google Maps, we set it to the satellite view of the map and zoomed in on a waypoint until we could actually see the tire tracks that defined the trail. Then we simply right-click on a spot on the trail next to the waypoint marker, and choose “what’s here” from the menu options. A green arrow appears to mark the precise spot we are locating. Clicking on that arrow displays the latitude and longitude in decimal degrees. (Note that using the newest version of Google Maps to obtain precise GPS coordinates you should left click on the desired location on the map but NOT on the red pin itself. The GPS coordinates in decimal degrees will appear in the rectangular info box on the upper left of the map screen.)

Repeating the process for the whole route, we had the coordinates we needed for our GPS. But we wanted to navigate the route by distance and heading, using the GPS only for confirmation. Tracing in the lines of the trail segments between the waypoints on the Google Map gave us the precise distance measurements.

WHAT ARE GEOGRAPHIC DATUMS AND WHY SHOULD WE CARE

Planning a complex journey in Africa, we were using detailed topo maps of the area we would be traveling through. The map set was from Russia, and we quickly learned that the latitude and longitude information on a map does not always match what is on a GPS unit. Latitude and longitude values can be based on different geodetic systems or “datums”, the most common being WGS 84 which is the one used by all GPS equipment. Paper maps created by different national cartographical entities may use other datums (there is a useful list of datums here).

A “datum” is simply the mathematical model of the Earth used to calculate the coordinates on any map, chart, or survey system. All coordinates reference some particular set of numbers for the size and shape of the Earth. “Grid shift” exists between datums because each one has a different point of origin. Grid shifts may be relatively small, but they can also be quite large, so careful conversion across datums is critical for accurate navigation. Parameters for simple XYZ conversion between many datums and WGS-84 are available through the National Geospatial-Intelligence Agency (website | datum home page).

More generally one datum is changed into any other datum using a process called Helmert transformations. This involves complicated mathematical formulas for converting the spherical coordinates into Cartesian coordinates and applying a seven parameter transformation (translation, three-dimensional rotation), and converting back. For the “math-adverse,” there are a number of commercial conversion software packages on the market as well as a few shareware options (The World Coordinate Converter free tool: http://twcc.free.fr).