Staying Organized on the Road 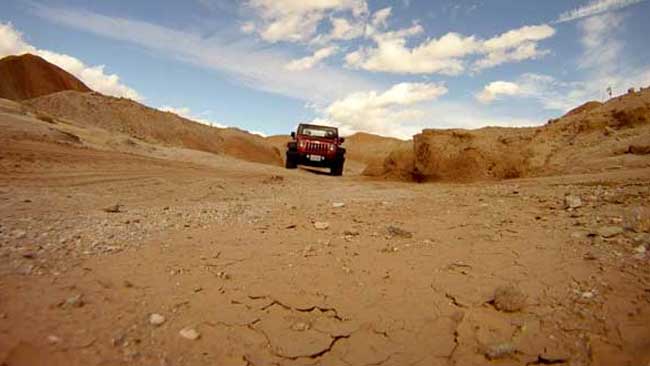 Despite the temptation to carry every possible spare part and emergency item during the Gazelle Rally, we have been told by folks with experience in desert rallies that we will have to limit the amount of stuff we pack in the Jeep. We have faced this kind of dilemma before, when we were preparing for our 10,000 mile “roadtrip” across the USA. Here’s what we did then…


A six-week road trip is an amazing experience, but it also creates plenty of opportunities for total chaos. Staying organized during the journey was a challenge. Basically we were living out of the Jeep, carrying all our gear and just re-supplying perishables on stops along the route.

We had to come up with a work-able solution to simply avoid being buried under our “stuff” while driving. And we needed to make sure we didn’t lose anything important along the way. Finally, because we were changing the location and type of accomodations almost daily, we needed to be quick when it came to packing and unpacking bags, and loading and unloading the Jeep.

HOW MUCH DO WE REALLY NEED TO TAKE

Deciding what to bring was an exercise in creative definitions of the word “need”. Two people have two very different ideas of the “basic necessities.” We had to negotiate and compromise on individual priorities. Of course there were no arguments about obvious things like the tent and sleeping bags, but did we really “need” BBQ tongs, and how many batteries were enough.

With plenty of time to plan, we used a “brainstorming” model, starting off with a giant list of everything we thought we “needed.” Both of us could add to the list, and neither was allowed to cross anything off yet. Once the “master list” was compiled, we shared it for review, and that is when the serious discussion began. We debated the “value” of various items as we tried to narrow it down. Both of us made concessions, and eventually we had a manageable “packing list”.

The final review came the day before departure as we pre-loaded the Jeep to make sure everything fit, and nothing was going to come sliding down on our heads if we had to make an abrupt stop.

Even with just the “necessities,” we still had quite a lot of “stuff.” Our next challenge was how best to pack it all in a way that didn’t require completely unloading the jeep just to find a toothbrush.

There were things we needed almost daily, such as the tent and sleeping bags, but there were also things, like river gear, we only needed for certain segments of the trip. And we certainly didn’t need to take all our camping gear on nights we were spending in a hotel! Then there were the items, such as cameras, ipods, maps and books, that had to be accessible even while we were driving.

We decided to organize the gear into a number of seperate containers, according to usage. All the “camp kitchen” stuff went into one big plastic box. Tools were in a smaller box, stored in a larger trunk, that had an easily accessible top section, where we put batteries, video tapes, and other things that needed to be easy to reach without unpacking. We each had a small backpack for our personal items, and there was a larger duffle bag for clean clothes, as well as a “laundry bag.”

Every item had its “place” (as noted on the master checklist), and we became quite disciplined at putting things back in the proper box when breaking camp (or checking out of the hotel).

Containers were loaded into the Jeep in a way that the most used items were easily accessible. The cooler and water jugs were right there when you opened the back, and could be reached without taking other stuff out. The emergency supplies were toward the back (optimists that we are). From time to time we changed placements in anticipation of the next segment of the trip, so we moved the river gear as we approached the portion of the trip where we were using it, and the tent could go way in the back when we knew we were staying in a hotel the next night.


OMG, WE FORGOT THE…

During the trip, we created a “system” with the containers and checklists to make sure we didn’t leave anything behind (and amazingly we didn’t lose a single thing duirng the six weeks).

The most important part of our “system” was putting each item back in it’s place after we were done with it, smaller boxes or bags into their designated larger container. Each large container had it’s own checklist, and from time to time we would verify using those individual checklists. But the key to our “success” was in doing a quick inventory of the main containers before we left a site. One of us would read down the list of the ten or so containers, while another would physically verify and confirm that it was in the Jeep. Once everything was loaded, we would do a visual inspection of the hotel room or campsite, to make sure there was nothing lying around. This process only added a few minutes to departure time, but ensured we had everything we came with. And as time went on, we got quite efficient with it.

Our “system” also helped us keep the Jeep relatively free of clutter, as items were returned to their places daily, rather than left spread out across the back seat. We also made sure to empty trash frequently (usually with every gas break, or at the start or end of the day) so that there were no spills or stale food odors lingering in the vehicle.