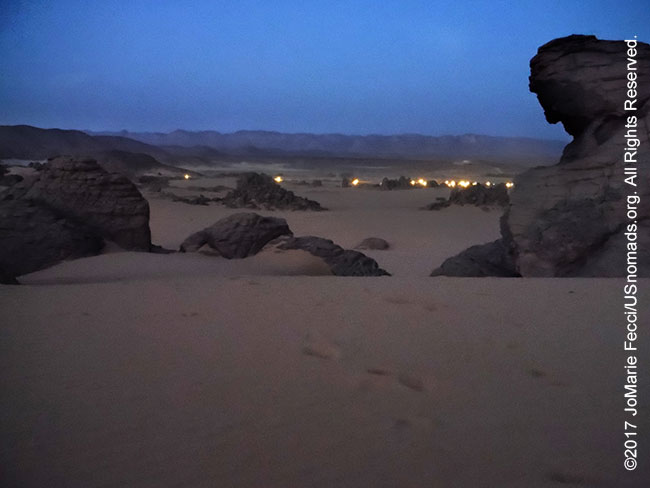 DJANET, ALGERIA — It’s always bizarre to arrive in a new place in the middle of the night. But the flights into Djanet all arrive around midnight. Not that there are so many flights arriving here these days — depending on the time of year there may only be a few flights a week to and from Algiers. Anyway, I was lucky enough to be on one, and smiled as I deplaned into the warm Saharan night. I walked across the tarmac to the small terminal at Tiska, where Algerian police were politely checking the papers of anyone who looked like they might be a foreign tourist. There were only a few of us. And one or two Algerians who looked “foreign” enough to be asked for their papers too — a humorous exchange took place between the Algerian men and the police (though it was in Arabic, and I couldn’t understand exactly what was said).

The other tourists all had their guides waiting right in the police area of the terminal, and when I went to get my luggage, one of the officers stopped me, asking where my guide was. I tried to reassure him that I had someone coming to meet me, but he seemed genuinely concerned. I wasn’t sure at that point if they thought maybe I was an unauthorized journalist, since the police at the airport in Algiers kept asking me if I was one. So, as a confidence building measure to “prove” my “tourist” status, I went searching for my copy of my invitation letter that had been prepared by an authorized tour company based in Djanet. That seemed to placate them, and I gathered up my bags and headed out to meet Mohammed and the rest of my team.

It was late and I was tired. But I was excited to finally be here. We drove into the darkness of the desert night for about 30km to Efri, a suburb of Djanet, where I can sleep for a few hours before setting off towards the Libyan border in the morning…