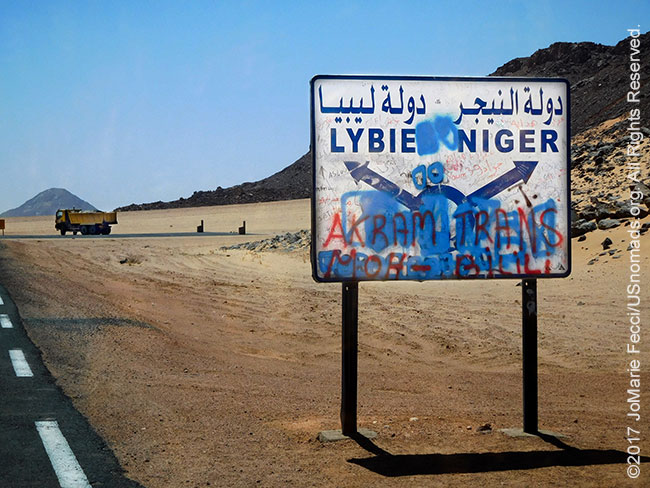 EL BERDJ, ALGERIA — We set off for the desert this morning. Though “set off for” is probably not the best way to say it since Djanet is actually already in the desert. In any case we covered a lot of miles, first on the highway, and then on sand. The highway drive was a straight shot on nicely paved tarmac surrounded by the Sahara’s vastness. We made a stop en route to deliver some food to a nomad camel herder, then passed the turnoff for the road to Niger, and took the direction of Libya.

This part of the desert was sandy with large towers of rocky hills and the far off walls of the Tassili plateau somewhere in the background. I was getting used to the scale of its immensity when the truck started acting up. It was coughing and sputtering a bit, then kind of stalled–though not because of gear changes. And it wouldn’t restart.

Before I could begin to figure out what might be wrong, Tagazou picked up a rock and started gently banging rhythmically on the fuel pump. It seems that the sand here really does get into everything — gas containers included. The guys explained that when we buy gas, if it is coming from the bottom of the storage container, it can be contaminated by the constantly blowing dust. The sludge then blocks the fuel flow. The gentle banging sort of stirs it up and opens the passage and voila, the truck started again — a lesson in “field fixes” Sahara-style.

As we reached the entryway into the area known as the Tadrart we encountered our first army checkpoint. It was very “routine” and I had the sense that there is not a particularly heightened security concern here at the moment. There was nothing marking the checkpoint or blocking us from passing, and we just stopped and waited for the soldiers to come out of their tent. We showed them our official paper, an itinerary of sorts which had been filed with the police in Djanet prior to our departure, and they waved us on.

Once out of sight of the army, we started to look for a good place to set up camp for the night. The terrain was a mix of flat solid sand in a wide open space surrounded by tall walls of black craggy rock, with mounds of soft sand blown into dunes piled up between the rock. We wanted a place that would be beautiful but also protected and Mohammed pointed out that we should find a spot that would have shade in the morning. After a little searching we found a great location tucked in between two high rock walls — one to the east and one to the west — so even though it was shaded now, it would also be shaded in the morning. We started unpacking the truck and set up camp for a first night under the stars.