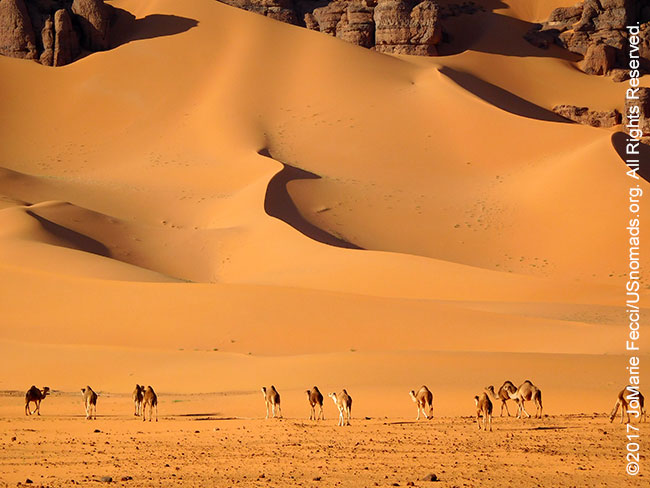 WANTA BERKA, ALGERIA — Last night we stayed up quite late, waiting for the full moon to rise over the canyon walls. It got pretty cold and we were bundled up and huddled close around the fire. Tagazou and Saghd had their guitars out and were playing the desert blues of the tenere known as “assouf.” It is the musical style of the band Tinariwen and in fact they played a few songs from that group and other local bands, as well as just some of their own music and the ambiance was otherworldly with the flickering fire and the odd shadows of the strangely shaped canyon walls. When the moon finally peeked up over the edge, it thew so much light which reflected off the sand, making it bright enough that I could almost think it was morning.

I couldn’t help waking up early with a bit of excitement about being here. The guys were still asleep, and I didn’t want to wake them, so I walked quietly away from camp to explore the morning’s mysteries. Animal tracks in the sand told a story that I could not decipher, and I followed what looked like a fresh set of tracks half hoping I would come upon their maker. Of course, the tracks disappeared when they reached the rocky base of the cliff walls, and I imagined the little animal must be hiding out in a crevice or burrow between the rocks, watching me and waiting for me to leave. The sun had not yet made its way over the walls protecting the canyon, and it was still chilly.

By the time the sunlight reached camp, we were already almost packed up and ready to roll. We left the canyon and passed “helicopter rock” to go in search of the first example of pre-historic art that makes this place so special. There are 15,000 known examples of ancient rock paintings and engravings in the Tassili N’ajjer UNESCO site, which encompasses almost this whole region. It is like an amazing otherworldly open-air museum stretched out across the desert. But unlike in a museum, here we are free to wander and savor the “discovery” of each location as if it was our own.

When the heat of the day hit the desert sand with full force, we began to look for shelter. I was surprised how fatiguing the heat can be when we have no protection from the sun’s rays. I mean we are covered, and even in the “shade” of the truck’s roof, but at the end of the day, a truck is just a giant tin can and we are slow-roasting like sardines in oil between the sun’s rays and the heat reflected back off the sand. There is a reason caravans moved mostly at night. The ancient wisdom is truth. Like the makers of the rock art we have been discovering, we find shelter between the folds of the sandstone cliffs. As we tuck ourselves and our truck as far between and below the rock as we can, I realize a certain sense of connection across the ages to the ancient artists. Humanity does not change and our struggles to survive in the face of the wilderness remain the same despite all our technology. Time passes and there is nothing to do but wait. I, being fresh from the stress of urban life, stubbornly decide to go for a midday walk while the Tuareg crew naps in the shade. I finished off almost a whole bottle of water and took another one along for the walk, then stepped out into the blazing sun, determined to make the most of my time. The light was flat and not beautiful. The sensuous curves of the desert landscape had disappeared. The sun beat down on me as I walked and I had to squint to really see much at all in the harsh brightness. I crossed the open sand unconsciously moving toward the darkness of shade on the other side of the canyon. Scrambling over rock-spill at the base of a cliff I tried to frame imagery that would “capture” the essence of the desert, but the images were as flat as crime scene photos. Sweat mixed with sun-block was stinging my eyes and I had already finished half my water. Humbled, I turned back towards the truck in frustration.

The guys were making tea when I got there. I joined them for the first glass of the sweet revitalizing drink and the frustration quickly passed. We took our time over the second and third glasses until the shadows were growing longer and Mohammed suggested we move on.

We were leaving the tight canyons of El Berdj, and moving into a new more open landscape. The desert’s beauty had returned in full force. The first sand dunes glistened in the sun, sculpted by shadow into perfect curves. A vibrant yellow contrasted with the blackness of the rock. And then I saw the camels. Two of them. On top of the dunes. They were too far for even a telephoto lens to make much of the scene, and I wanted to make a beeline for the base of the dunes. Mohammed stopped me, explaining they would run away if they saw the truck coming closer. Apparently they were “wild” camels (he explained that camels used to people will not run away from a vehicle, because they think that people are bringing food or water, but “wild” ones take off as soon as you begin to approach). In other parts of the Sahara I had always been told that there was no such thing as “wild” camels — that all camels belonged to someone, and those that were grazing alone in the desert were just left out to graze far from their owner. I left the truck to Mohammed and continued slowly on foot towards the camels. As they came over the dune, I saw there were more of them — a whole herd!

By day’s end we had accomplished a lot and the camels had been a great “bonus.” I was learning to accept the rhythm of the desert on its own terms. We set up camp in a bowl halfway up the dunes, where it felt like our heavily-laden truck had reached its limit in the soft sand. As we unloaded the gear, the guys were encouraging me to walk up to the top of the dunes to watch the sunset. I was tired from the day and my ill-conceived midday outing in the sun, and not really in the mood for a hike up soft steep sand. And besides we were already quite high, and in a beautiful spot for sunset. Still, I was a “guest” in their desert, and I didn’t want to seem unappreciative of their hospitality — so I set off against my better judgement to climb the dune.

Just like when I am driving, I had to pick the right line or it would be impossible to get up the steep face of it. I walked along the contour of one dune, across a bowl and started following the contour up the one that would give me the easiest line to reach the “top” of the biggest one. Below the desert unfolded into a dune-field that seemed to have no end. The wind was blowing ever so slightly, and I could see some of the sand sliding down the slip-face of the giant dune I was supposed to climb. Even from this angle the “top” looked really high. I hesitated awhile, enjoying the view from where I was, muttering to myself how silly it was for me to try to climb up that giant dune when I am so “not” athletic. And then I proceeded to climb up the dune. Slowly and tentatively at first, I climbed, my feet sinking deep down into the soft sand, but also serving as anchors preventing me from sliding back down. Then about ten feet from the top it got so soft I was essentially climbing in place, sliding back down with every step forward. A more athletic person would have probably ran up the rest of the way. Still, I had gotten this far, it would be silly to give up so close to the top. I leaned into it on all fours, and scrambled those last few feet to the crest. On the other side, my reward, a sea of yellow dunes alternated with black rock spires in places stretching beyond infinity and the sunset…