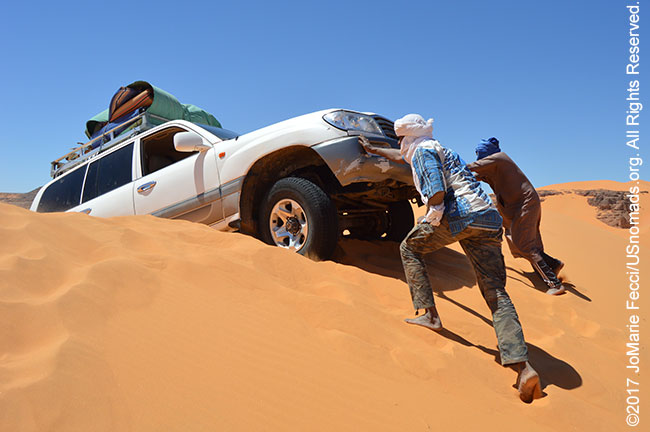 INDJAREN — TADRART, ALGERIA — Dancing with camels this morning. Probably the same camels we saw yesterday in the dunes. We stopped to photograph them again, and Mohammed got out his drone to see about getting some aerial shots. The whole moment was a bit surreal, as we had the music playing loud and Saghd started dancing in the middle of nowhere with the camels crossing on the other side while Mohamed and Tagazou tried to get the drone to fly.

After the camels we got back to the more serious business of exploration. I realized that the wind here seems to be doing the opposite of what it does in Moab and places out in the southwest of the U.S., where it sculpts the rock, digging deeper and deeper. Here the wind is blowing the sand into the canyon and slowly burying the rock. At the same time, the rock itself is eroding and becoming sand. The black sand we saw was the dust of crumbled rock. So this canyon is slowly disappearing. It is very clear when we see certain examples of the engravings that are partially covered already. Who knows how much more art may lay below the sand, or may simply be gone due to the erosion.

The presence of so many different engravings and paintings all around what is now a harsh desert really brings home the power of climate change. I am beginning to understand that all those thousands of years ago, this place was a vibrant environment with plenty of water and people and animals. The oldest art shows jungle animals, like giraffes and elephants. While today the area is barren and arid, with even the rock itself in decay. Someday it will be gone. Buried or simply turned to dust.

At one point in the afternoon, I was exploring on my own and finding engravings and paintings between rock walls and fragments of pottery mixed in the rubble of the sand. I started to pick up some of the pottery shards, then realized what I was doing and put them back. It was bizarre to be just walking here and uncovering these things. I felt like there should be some kind of barrier or something to protect these sites. But I suppose the desert itself is the barrier.

And speaking of barriers, today we had to drive over the dunes to cross into the other side of the Tadrart. The area is like a giant closed off canyon with only two “entrances” and our plan is to loop around and exit the other way. The dunes were pretty high and the truck was pretty heavily loaded. We aired way down, but got stuck on the first attempt. They don’t have MaxTrax here, so we had to dig out. For the second try, Mohamemd drove it all the way back to the bottom, then took a huge long run up and just barely made it over. It was a good lesson for me, as I saw the distance it took to build up enough momentum with this gas-fueled Land Cruiser. It is very different than the Jeeps or even the diesel HiLux. And the off-brand tires don’t help. I am learning how important it is to have a really capable vehicle and also how skilled the local drivers are at working within the limitations of these trucks.

The terrain changed again on this side of the dunes. It seems like we are really going through such a variety of different landscapes, from the narrow canyons the other day, to dunes, and wide open desert, then more rock formations. There is a lot to photograph and Mohammed and I are alternating with the driving duties, so that I can shoot more.