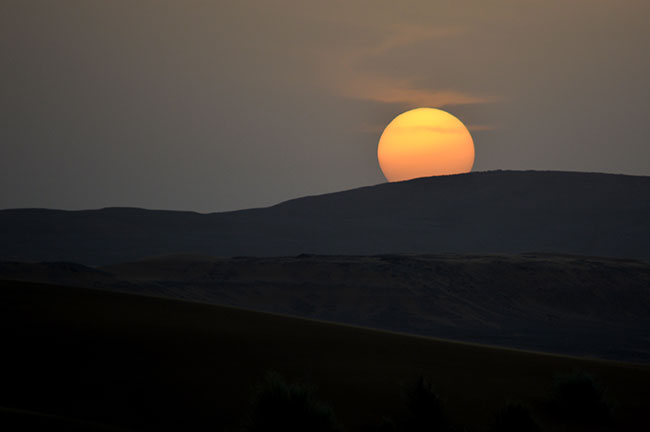 ADJALATI, ALGERIA — We started off the day in search of gazelles following faint tracks along the length of the erg Tin Merzouga near the Libyan border. Mohammed had seen some here once before and the terrain was wide open, so if we encountered some we could pace them for a while. There were lots of tracks but we saw no gazelles. Still, we enjoyed the chance to drive the open desert in a moment of true freedom. We had no real destination as we chased our phantom gazelles against a background of tall sand dunes and blue sky.

Eventually we turned around and began to make our way back towards “civilization” and the more traveled sections of the Tadrart. We worked our way into a lunar landscape that looked like the ruins of some ancient city carved into the rock. One could imagine that this had been a town with giant gothic cathedral-like structures that now lie in pieces. But it was just the work of wind eroding sandstone cliffs. We continued as the wind picked up and began blowing sand harder around us.

We saw another vehicle in the distance, and I realized that we had not seen any other people for days. We found a lunch spot tucked in a cave, then made our way around and towards the exit point, where the army checkpoint consisted of a few soldiers in civilian clothes and a large tent. The soldiers came up to us to ask for cigarettes and firewood. They didn’t even have their weapons. I mentioned to Mohammed that they didn’t seem very serious, and that had I been alone I might not even have stopped for them thinking they were just nomads as it did not look like a military checkpoint to me. He laughed and the “nomades militaires” became a running joke for the rest of the day.

After leaving the Tadrart, we looked for camp at a place Mohammed knew that had an unusual mix of black and gold sand. The wind was blowing up a little bit and there were clouds and dust in the air, which made for a beautiful sunset.