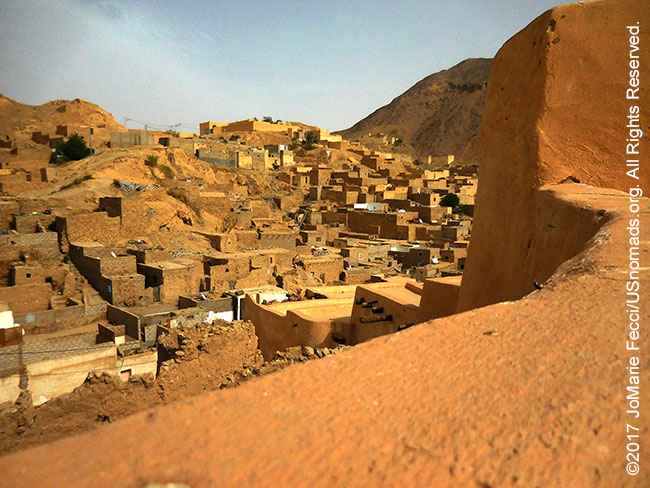 DJANET, ALGERIA — I was up early, before dawn, and went for a walk on the dunes of Erg Admer while the light was still blue with only the first streaks of distant red signaling the approach of the sun. As I followed the contours of a dune with no particular destination in mind I realized how much I have learned about the desert since I began dreaming of a grand Sahara crossing five years ago. Today I stand here, deep in a remote south-eastern corner of Algeria, comfortably walking alone across a sea of sand dunes with no fear. I have risen to the desert’s challenges and am reaping its reward. The magnificence of this mix of eternal and ephemeral surrounds me and I bask in the present trying to stretch it out a little longer.

My magical moment is interrupted by the warm touch of the first rays of the sun on my shoulder. Its morning and I make my way back to camp where the guys are just waking up. No one is in a hurry to exchange the freedom of the tenere for the stress of the town.

After packing up camp, we made a stop to visit the crying cows again before turning back towards Djanet. We would only stay in the town for less than 24 hours — just long enough to re-supply and do laundry. Though Djanet is a quiet oasis town, its pace seemed hectic after the desert. Outside everyone seemed to be in a hurry to get somewhere else. Our team split up, as the guys took care of the truck and procuring supplies for the next segment of the journey to the north, while I did my own administrative tasks, recharged camera batteries and washed clothes. And despite my sadness at leaving the magic of the desert for a day, it did feel good to have a real shower.

We all met up again late in the afternoon, and they showed me around their town. Djanet is an old town, built up around the oasis that feeds the palmeraie in the valley between the hills. The town itself is constructed upwards right into the mountain, so that at times it is hard to tell where the stones of the mountain end and the stones of the houses begin. In the center is an ancient walled city, known as a ksar, in various stages of decay, with a restored section at the top. The restored section is brightly painted and stands out like a beacon of sorts, as the most prominent structure, but in fact the towns most important buildings are more non-descript modern structures. The “downtown” includes a medical clinic, government buildings, schools and a religious center.

However, the mosque that I found the most “beautiful” was an old one, in the ruins of a second ksar. I came upon the mosque amid the rubble of ruined buildings on a hillside. The twisting streets of the ksar climbed up the hillside and the fallen stones from abandoned homes seemed to be almost a part of the mountain itself, the same reddish brown earth tone made darker by the long afternoon shadows. In the middle of all this was a freshly whitewashed tower that seemed to rise up from the debris as I climbed closer. The ancient mosque was still in use, and a loudspeaker was attached to the top of the tower, crowned with a shiny metal crescent. For me this mosque represented the spirit of the people of the desert, standing tall and bright with dignity amidst the chaos of the world, quietly proud in the simple fact of survival against the odds.