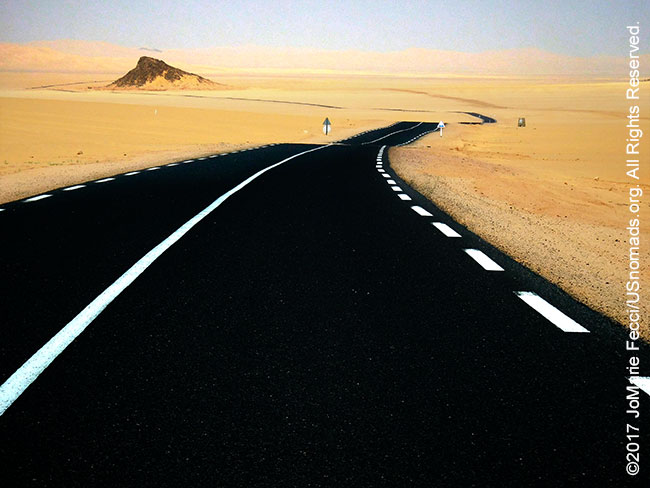 IHRIR, ALGERIA — We left Djanet early in the morning, after getting “lost” in a tangle of fenced-off desert where there didn’t used to be any fences on the outskirts of town. Apparently someone had sectioned off the land and was preparing it for agricultural use. This is something I also saw happening in Mauritania, and it confuses drivers who are used to being able to go in a fairly straight line from point to point. As there are no roads to follow, we had to drive around randomly looking for a way around the blocked area. Eventually a new piste will be worn in and the route will become clear, but for now it remains a puzzle.

We made our way to the N3, a nicely paved tar road that cuts through the empty desert, heading north. This highway goes all the way to Algiers, and seems to follow the trajectory of a pipeline that runs along side it. It will take us up over the pass onto the heights of the plateau of the Tassili. Of course to really visit the plateau you need to go with pack mules and on foot. But we are heading to an oasis area where we will get at least a look at the landscapes of the heights.

At the point where the highway climbs up to the top of the pass there was a military truck tucked in on the side of the rocks. It was not a checkpoint and they did not stop us — they just seemed to be there “observing.” Beyond their position, the plateau flattens out and has a totally different feel than the desert below. It is rocky. Very rocky. Black slate-like rocks cover the surface giving it a dark and ragged sinister feel.

After a few hours, we turned off the N3 onto a smaller paved road weaving through the black rock to an overlook. Below was an ancient town that was only reachable by foot. It is a museum of sorts now. No one lives there. The population lives in a modern town on the other side of the cliff. There was a site of guest huts at the top of the overlook and there were a few vehicles there. Apparently it was some other tourists with a military escort, and I was again reminded how fortunate I was to be here with my local team. We did not interact with the other tourists or their escort, but did stop to photograph and use the guest huts for a lunch stop.

Then we drove down into the oasis. At first glance it looked like a normal town, or more precisely a village. It was at the bottom of the cliffs, and there was a lot of green, so I imagined there was often water. I was unprepared for what I saw as I chased some imagery of wildflowers beyond the brush. As I explored on foot, I started walking along some stone outcropping, and then there was a bit of water. I was able to walk from rock to rock to cross the water and continue photographing, and the guys moved the truck around and told me to meet them on the other side, so I began to follow the rock in that direction, and soon I was walking on the edge of a river.

The rock outcropping became a river bank, and there were pools in between and clean cool water flowed over the stone. In some places it was deep enough to swim in. It was an incredibly beautiful and wild spot and when i was done photographing I just sat on the bank for awhile savoring the moment. It was beyond any oasis I might have imagined.

As the day wore on we made a stop to visit Saghd’s aunt who lived in the village. She welcomed us and we had a chance to talk with an older cousin who also worked in tourism. Discussions centered on the lack of tourists and the government’s role in encouraging the tourism industry in the south. Local elections were happening soon and the walls were covered with posters for different candidates and parties. Mohammed explained that they would all come to the village and gather the people and promise things, but that nothing much changed once they were elected. It seemed there was a lot of apathy about the elections in general. No one really expected much.

In the evening we left to set up camp at the overlook, but when we got there Mohammed told me to stay in the vehicle. There were a few white pickup trucks parked next to the guest huts, and their license plates indicated that they were from Ouargala. While Mohammed was checking out the situation, the owners of the trucks, a group of young men, came up from a hike down to the village below. Mohammed returned to the truck and said we should probably go back to Saghd’s aunt’s house for the night. He was concerned about these young men from another region. He explained that if they were Tuareg, he would not worry, but as they were “Arab” he was uncomfortable about the “security” situation since I was an American and under his protection. He said he didn’t see any indication of any trouble but he would feel better if we went back to the village. It was the first time I sensed any tension or concern on his part, and I trusted his experience and knowledge. Without hesitation I agreed and Saghd called his aunt to tell her we were coming back. She greeted us warmly on our return and we settled in to overnight in her courtyard.