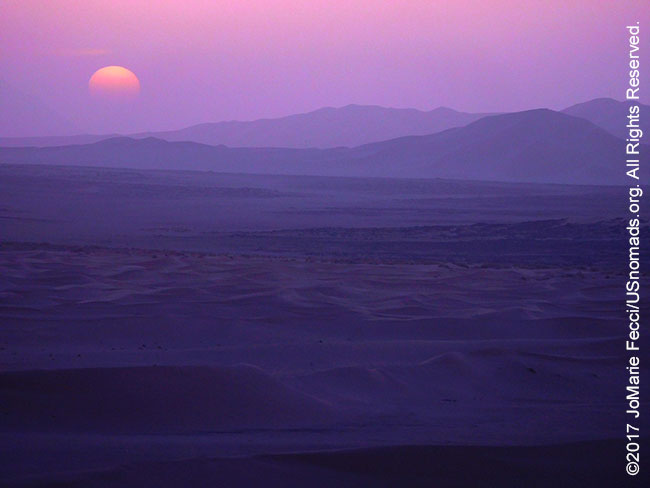 ERG ADMER, ALGERIA — We said goodbye to Saghd’s aunt in the morning as she prepared to take out her goats and we left to return to the heights. The white pickups were still there, but no sign of the guys from last night, and we made our photos and moved on. I couldn’t get over how different the landscape was up here from the Tadrart and the surrounding desert. All the black rock everywhere, it was a completely different feel. And I realized there were no camels. Apparently this area is accessible by donkey rather than camel. I also remember hearing somewhere that camels do not like hills. Whatever the reason, it seemed like the first day without camels since I arrived.

We turned back towards the south on the N3 again, for a little while before turning off into the rock folds of the heights on the other side. We were looking for some kind of medicinal herbs that only grow up here. The guys wanted to take advantage of being up here to pick some to bring home, and I was happy to explore this area a little further. We noticed that some nomads had been using the area as a camp. The rocks were arranged to make a corral for their goats and the droppings were fresh. What was most interesting for me was to see that they were living very similarly to the ancient artists who had done all the rock art. The people were tucked into the rock crevices and used the topography to create their shelters rather than setting up a whole bunch of man-made structures. If you didn’t look closely you wouldn’t even realize that it was a “camp.”

Beyond the corrals there was some rock art but also some modern graffiti, which Mohammed said was probably done by a truck driver or some one working on the gas pipeline. He noted that they were probably from another region and camped here and were not really aware of the significance of the rock art where they placed their own “I was here” tags. Still, it was sad to see the ugliness of the modern scrawls on the same walls as the ancients’ laboriuosly crafted art. It reminded me of the problem we have recently had in the US with people putting their own “art” on the rock in National Parks — as if we don’t have enough blank walls for graffiti in our cities.

After the plant “harvest” we headed to wadi Dider a vast flat expanse where we actually saw cows for the first time. I got excited about the cows because of all the cow engravings I had been seeing. It was like the connections were coming together about this place and its past. As if to make that point stronger, we stopped at a site that was actually protected by the local equivalent of a ranger, who gave us a guided tour of a gallery of rock art engraved on a huge bolder face that we had to walk over. He asked us to remove our shoes and the warm heat of the rock on my feet felt good as we slowly went from engraving to engraving and then to the highlight of the “show” the ancient “sleeping antelope” that is enshrined on the Algerian 100 Dinar bill. The beauty of the antelope was unparalleled in terms of both worksmanship and expression. It was a true masterpiece and it was almost spiritual to be able to see it here in it’s context rather than removed to some museum far from the rock and oued where it was born.

It made me reflect also on the fact that so much ancient art is in museums completely devoid of its context, and seeing the work in the landscape where it was created gives it so much more poignancy. I felt like we were at a shrine, and spoke in whispers to Mohammed as he translated the guide’s explanations to me.

On the way out of the oued we saw donkeys on the roadside, but still no camels, and I was commenting on “the day without camels” when we finally came back across a few lazing about in the shade of a massive tamarisk. We took over the spot for our lunch break and the camels took off at a fast pace. We had passed the encampment of a family of nomads nearby, and the animals probably belonged to them.

Later in the day we got plenty of camel time, as I was driving along erg Admer and Mohammed was giving me some pointers in dunefield navigation when we saw a great looking herd grazing nearby. The setting was perfect for the iconic postcard “camels and dunes” shot, except that the camels were on the shadow side of the dunes. Turning the situation into a teaching moment, Mohammed showed me how to use the truck to “herd” the animals onto the sunny side. He also shared a fun little “joke”: A camel, a goat and a dog get into a taxi. The driver takes them on their way, and the goat gets out first. He pays the driver and goes on his way, and the driver continues along the route until he reaches the dog’s stop. The dog gets out and pays the driver but he doesn’t have the exact amount, so while the driver is searching for change, the camel jumps out and runs away without paying. The driver takes off after the camel leaving the dog still waiting for his change. This explains why when you are driving, goats will just move out of the way, dogs will chase after the vehicle barking and camels will run away.

After my unique experience herding camels with a Toyota we set up camp in the dunes nearby and settled in for a fabulous sunset. Saghd and Tagazou had their guitars out early and Mohammed joined them on Djembe as we welcomed the stars with song…