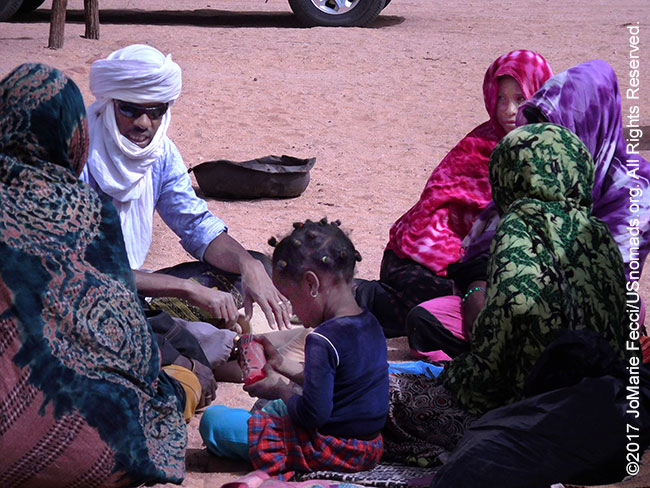 TIKOBAWIN, ALGERIA — This morning we awoke to dusty skies. Suddenly the desert was rendered in pastels. The whole tone was different. And in the back of my head I started to worry about whether or not my flight would be able to take off in a few days time. If we were entering a period of dust storms the plane may not be able to fly, and there wasn’t another one scheduled for days. Oh well, there is nothing we can do about weather, Inshallah it will all work out.

The dust was not yet so bad that we couldn’t see or that it really bothered us a lot. It was just a sort of film diffusing the light and changing the color of everything around us. It was like a strangely different desert as we drove out of the dunes and made our way towards Essendilène. To reach this famed place (it is the setting of a book “Le rendez-vous d’Essendilène,”written by a French guy, Roger Frison-Roche that has become a sort of standard) we crossed over the N3 to the east from our position in erg Admer and started to make our way towards a canyon that we could barely see as a faint shadow in the dust.

We stopped in a spot that seemed like the middle of no where on the desert piste. It was another army checkpoint that I would have completely missed on my own (even if it wasn’t dusty). We just waited there for a little while and I took the opportunity to photograph a distant herd of goats against the pastel walls of the rock formations in the distance. Eventually a pickup truck with a machine gun mounted in the bed (or was it an anti-aircraft gun) pulled up next to us and they were the “checkpoint.” They waved us on quickly, and we made our way to an opening between the rock walls near where I saw the goats.

Entering the canyon we came upon a surreal looking nomad encampment. I think it was mostly the strange colors of the dust that made it seem “surreal” but also the fact that it was kind of cobbled together with structures made from twisted sticks and fabric. Was it laundry drying or some kind of system to create shade, I don’t know. With the slightest wind the fabric fluttered in a parody of decoration. There was one solid looking tent, and also a sort of shaded spot where some of the family were gathered.

The traditional way of life for the nomads is dusty and hard. The families are big and everyone works. The men and older boys go with the camels, sometimes very far in order to find pasture. The women and younger boys take care of the goats, which cannot go so far from water. Typically in the morning some of the women will take the goats out while others will stay in the camp and take care of the daily chores.

The goats I had been photographing earlier belonged to this family. We gave some food supplies to the women, then sat down to chat for a little while. Tagazou was joking around with the young son who was elementary school age. The boy had never been to school. Education is a complicated issue for the people who continue to be nomadic, as the government has built schools in areas where there are towns, or even semi-permanent settlements or encampments, but there is no way for them to provide education for individual family groups who are living in this dispersed way.

Their day-to-day existence is a struggle, but they are free to live their lives in the way they want. It is hard to know if they have any real choice and this is really what they choose, or if they would prefer to live a settled life in the town. They do have relatives in the town, and go there for medical care sometimes, but the children do not go to school.

We did not speak about politics or education or “needs.” Our discussion was almost surreal. They asked us about the places we had recently been and if there was much grass there. And they were hoping that the dusty skies meant it would rain. Their concerns were all about the natural world and their own precarious place in it.

After our chat, we continued through the desert to the base of the slot canyon known as Essendilène, where Tazagou joined me for a hike. It is only accessible by foot, and the area has a water source that is set up with a solar powered pump. The nomads can get water here. The canyon itself is very narrow and lush and some parts of our hike were almost jungle-like. The tall walls of the narrow space were sheer and straight, and it was truly a beautiful spot. I will need to read the book one day, if I can find it (it is from 1954 and in French and out of print, so it might be difficult).

Later we stopped back near the Tamarisk tree where we had seen the camels at lunch time yesterday to look for the nomad family that was camped there and give them food supplies as well. We found their camp and Mohammed spoke with them briefly. They were new to the area, and had just set up there in these last few days. Beyond their “camp” we stopped for a military checkpoint, and the soldier in charge looked to be from Kabylie. He smiled when he saw me driving the truck full of Tuareg men, and made a little joke with Mohammed, and then we were on our way to a new landscape, this time full of otherworldly rock spires and arches.

Tikobawin, as it is called, is a somewhat popular local destination, and we encountered several other vehicles at various points, especially near this one famous arch (though nowhere near the kind of traffic we would see in Moab). The sky was still overcast with dust and I couldn’t tell if it was better or worse, but it certainly gave the location an eerie an unusual light and I made a lot of photos as we looked for a place to camp that would be protected from the wind and blowing sand. We finally found a great spot at the base of one of the rock formations in a sort of crevice between two towers and across from a big rock wall, but still open to the sky so we could see the stars.