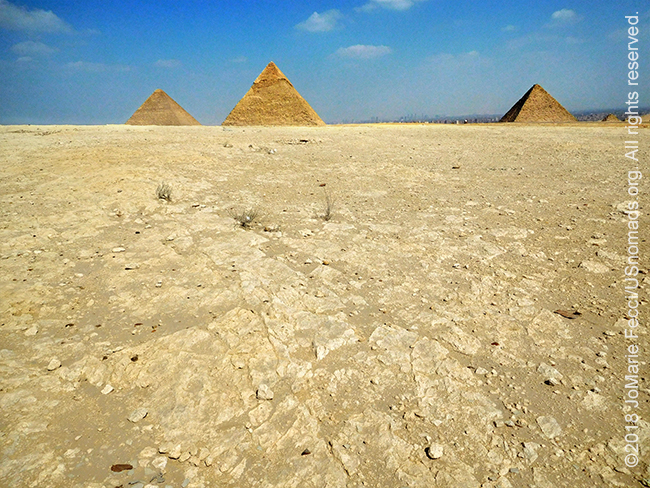 GIZA, EGYPT (30 March 2018) — Impossible to come to Egypt and not make a stop to see the Great Pyramids and the Sphinx. I had seriously considered trying to avoid an actual visit here, with the thought that I could maybe just gaze briefly at the pyramids from a distance, but in the end I gave in to the pull of history and the magical attraction of these ancient monuments.

The trip to Giza brought me closer to the desert, and the pyramids themselves sit on its edge with the chaos of the city and the tourist industry kept somewhat at bay by a few gates and some legal restrictions designed to protect the area which is part of the larger UNESCO World Heritage site listed as “Memphis and its Necropolis – the Pyramid Fields from Giza to Dahshur“.

But a level of chaos still manages to surround the sites, with guides and souvenir sellers, guys with camels who want you to ride them, and other guys with camels who just want you to pose with them, and guys driving horse chariots who want to give you a ride from one part of the spread out necropolis to the next, all for a price that is never really clear. I did my best to try to avoid them but it was almost impossible to get a nicely composed photo of the largest “Great” pyramid without one of the camel guys stepping into the frame then demanding money because you took a picture of his camel. The concept of “unauthorized photo” had taken on a whole new meaning and I sort of imagined a camel model release and even wondered if any of the animals had “supermodel” status.

In comparison, the souvenir vendors were quite mellow, displaying their offerings but not pestering anyone who didn’t express an interest. And there were plenty of interested customers. Even the camel guys were doing a brisk business with so many tourists happily posing or playing Lawrence of Arabia in selfies. More dangerous were the horse chariots ferrying people around the sites on no specific route with any open bit of sand considered part of the road, whether you were standing on it or not. We almost got run over by horse chariots more than once as we wandered around the base of the first and largest monument.

Despite all that, it really was awe inspiring, as we approached the massive construction which seemed to change with each step closer. What looked from a distance like a smooth faced building, morphed into a rugged pile of huge bricks stacked precisely and perfectly, then the size of the “bricks” became apparent as we saw the ant-like people climbing up to the entry way, completely dwarfed by the massive stone blocks.

The gradual reveal was suddenly interrupted by the sound of sirens wailing louder and louder and I assumed someone had maybe fainted from the heat or gotten run over by a horse chariot or bitten by a camel and the ambulances were rushing to take them to hospital. But no. It was the sound of the security escort for some diplomatic visit to the pyramids. An armored bomb squad truck, motorcycle cops, armed bodyguards, and various military and police units accompanied the dignitaries, attempting to carve out a security perimeter as the crowd of tourists ignored them and the horse chariot drivers weaved in between their vehicles as if they were just a minor annoyance.

The machine-gun toting bodyguards formed a sort of outward facing circle around their charges and could do nothing about the tourists taking snapshots of them or the pyramids behind. It seemed like one of the most fruitless exercises in attempting to maintain a security protocol I have ever seen. Though I guess “closing” the pyramids for a private visit would have been out of the question.

Anyway, I was not going to take the tour inside the pyramid, and so Nahla suggested we go to a spot she knew where I would be able to get away from the circus. We drove along the loop road between the pyramids of Khufu and Khafre stopping midway between the monuments and an overlook from where people were photographing them and Nahla pointed to the empty desert just next to the road. I grabbed my cameras and went for a walk. It was magnificent. I just kept walking till the desert dipped a bit and the road and all the chaos disappeared from sight. The pyramids rose up from the desert in all their ancient splendor. The light was good and they seemed to almost glow in their perfection. I made my photographs and just spent some time in this place appreciating these ancient wonders and their mysteries, feeling energized by the experience… 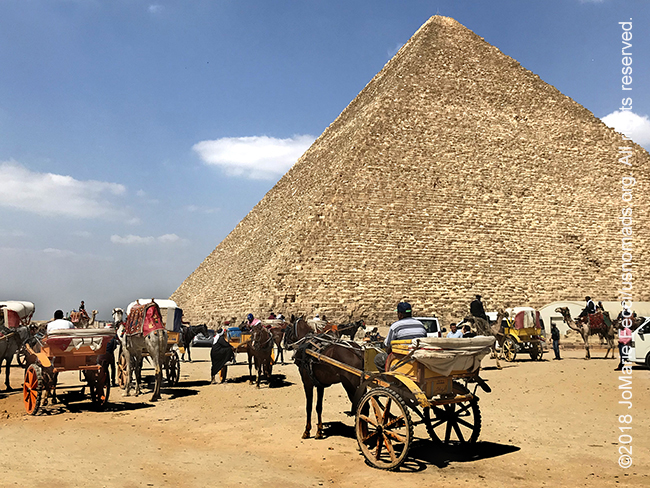 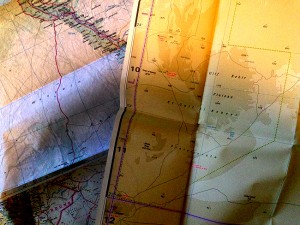