HEADING DOWN INTO THE MAZE: THE SWITCHBACKS

MOAB, UT — OCTOBER 2015: The only way to get from the top of the Orange Cliffs down into the Maze by vehicle is to descend a series of steep and winding switchbacks on a segment of the Flint Trail. Once an access route for cowboys moving cattle down “Under the Ledge,” the narrow dirt path winds between the rocks along cliff walls. The steepest part makes a descent of 800 feet in less than a mile. The trail is so tight in spots that there is only room for one vehicle — it is critical to ensure that no one is coming up before starting down. The terrain is rocky, but not difficult to drive under normal conditions. It can, however, be treacherous when wet, and should not be attempted until it has dried back out. Views across the canyon floor during the descent are spectacular and provide a “first taste” of the magical vistas to come.

The view down into the canyon from the Flint overlook…

From the top you cannot see all the switchbacks…

The turns look pretty tight, and may require backing up…

After confirming no one is coming up, the descent starts here…

The terrain is a little rocky, but nothing that looks technical…

As it descends the ledge it does get narrow in spots…

The first turn is steep and tight around this rock outcropping…

Turning into the switchback, taking it as wide as possible …

View from passenger side during descent is pretty dramatic…

The next descent is steeper and tighter and rockier…

The view back up to the Jeep from further down the trail, you almost can’t see it…

View out the windshield more than half the way down……

From the bottom looking back you cannot even see the trail… 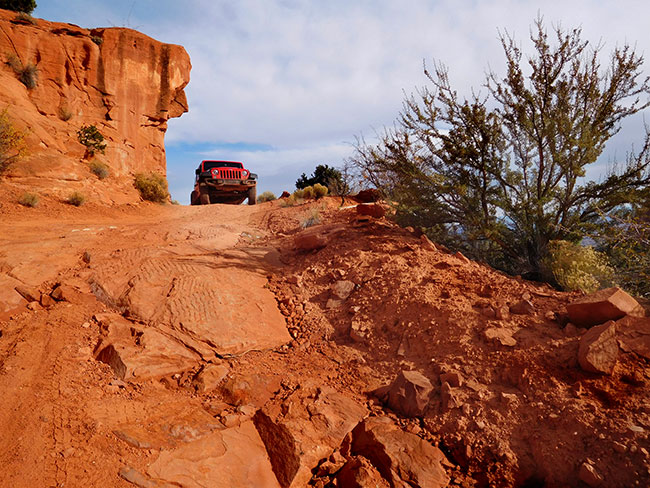